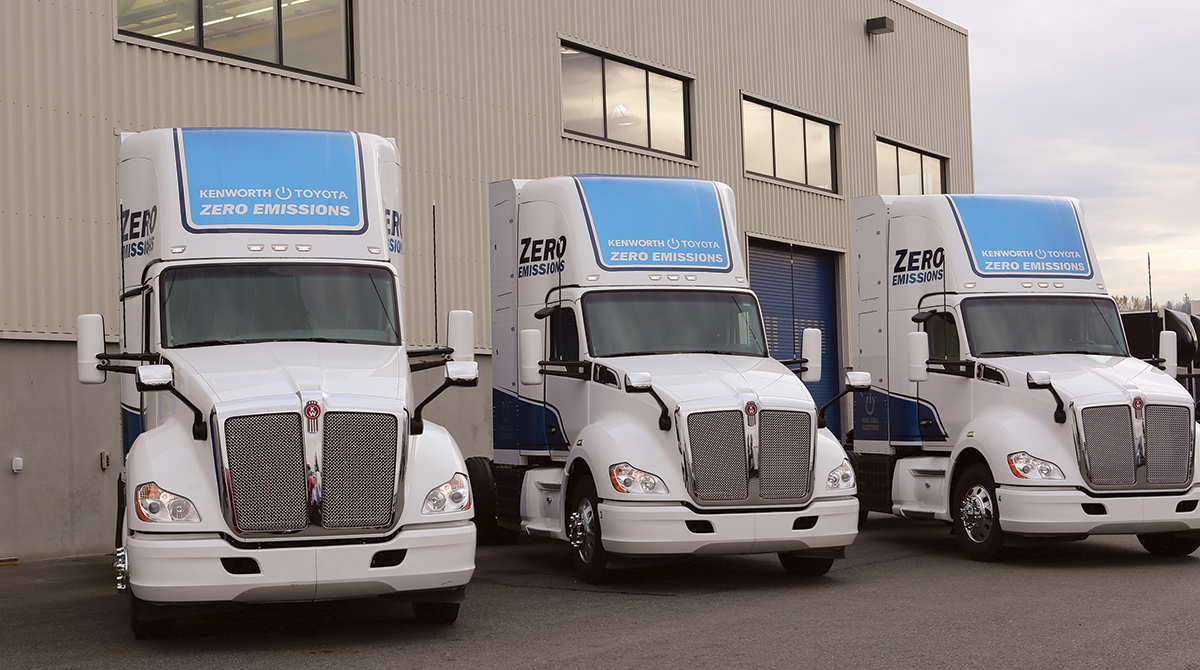 Several Kenworth tractors with Toyota hydrogen-electric powertrains that are being deployed in drayage operations around the Port of Los Angeles. (John Baxter)

Hydrogen will likely end up as the dominant fuel for longhaul trucks one or more decades from now, according to experts at familiar component suppliers and truck manufacturers. Nikola Motor Co. agrees, as one of the first entrants into this arena, with a whole new vehicle architecture.

Hydrogen carries much more energy for its weight than batteries, enhancing payload capacity. The system of high pressure hydrogen tanks on a truck tractor will allow for 15-minute refuel­ing, experts contend. A battery pack will be needed on hydrogen-­powered trucks to stabilize the fuel cell’s output, but it will be much smaller than those used on electric trucks. Industry experts also foresee that hydrogen-­electric vehicles will offer reasonable challenges to the maintenance department.

Fuel cells combine hydrogen and oxygen to make water vapor — something that also happens in diesel combustion. The difference is that the process involves generating electricity directly by separating the hydrogen’s electrons at the beginning of the process and capturing their flow as the same reaction occurs. 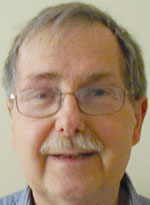 As Staffan Lundgren, Volvo Group director of technology exploration and strategy described, “Fuel cells and diesel engines both use air to oxidize a fuel. However, the fuel cell does not combust its hydrogen fuel in a flame.” It derives the energy through an electro-chemical process via a surface reaction instead, he said.

Materials from Kenworth Truck Co. explain: “Hydrogen fuel cell vehicles work through a chemical reaction by flowing hydrogen and air across opposite sides of a Proton Exchange Membrane, or PEM for short.”

The inner workings of the fuel cell involve complex chemistry and physics, judging from explanations of their operation, but they do bear a rough similarity to batteries, with an anode and a cathode, analogous to positive and negative terminals.

Wido Wesbroek, general manager for global fuel cells at Cummins, said, “The fuel is fed into the anode [the negative electrode] while oxygen from the atmosphere is introduced into the cathode [the positive electrode].”

“The exhaust product [water, water vapor, air and some residual hydrogen, but no NOx], is directed out of the fuel cell through an exhaust system,” he said. 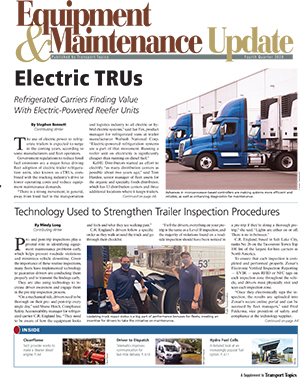 ►Braswell: Adapting to the virtual environment

►Freeze: A lesson in idling

Lundgren summed up the process by saying, “The resulting electron flow from the anode to the cathode side creates the electric power used by the vehicle’s electric propulsion system.”

So, how will fuel cells be constructed, and what will maintenance managers see?

“Each fuel cell is only a few millimeters thick, and hundreds of them are stacked together to build a fuel cell stack,” Wesbroek said.

In Cummins’ design, Wesbroek said, the hydrogen pressure is regulated to a constant set point, and the power produced by the fuel cell is controlled by the rpm of the process air blower, which is compatible to a turbocharger, although the pressure is much lower.

“Higher rpms produce more air and, with it, more oxygen, therefore more power is produced,” Wesbroek said. “Like a diesel engine, a fuel cell requires a cooling system, but with fuel cells, the coolant is electrically isolated so as not to conduct electricity, and the temperature of the rejected heat is much lower.”

Nikola’s Appel agreed. “There will be no maintenance required for the actual fuel cell stack,” he said.

Dana’s Yang explained that the only moving parts to a fuel cell are the gas valves, air ­blower motors and cooling pumps. However, routine maintenance to prevent contamination in the fuel cell cooling system is critical.

In describing how the fuel cell will coordinate with the battery pack to drive the truck, Appel said, “The battery pack has two main functions in the [fuel cell electric vehicle] truck: It manages high dynamic power situations, it can be used to balance the loads on the fuel cell, and it captures regenerative braking energy. We have implemented a sophisticated energy management [‘hybridization’] to distribute the vehicle’s loads between fuel cell and battery to optimize for lifetime, efficiency and performance.