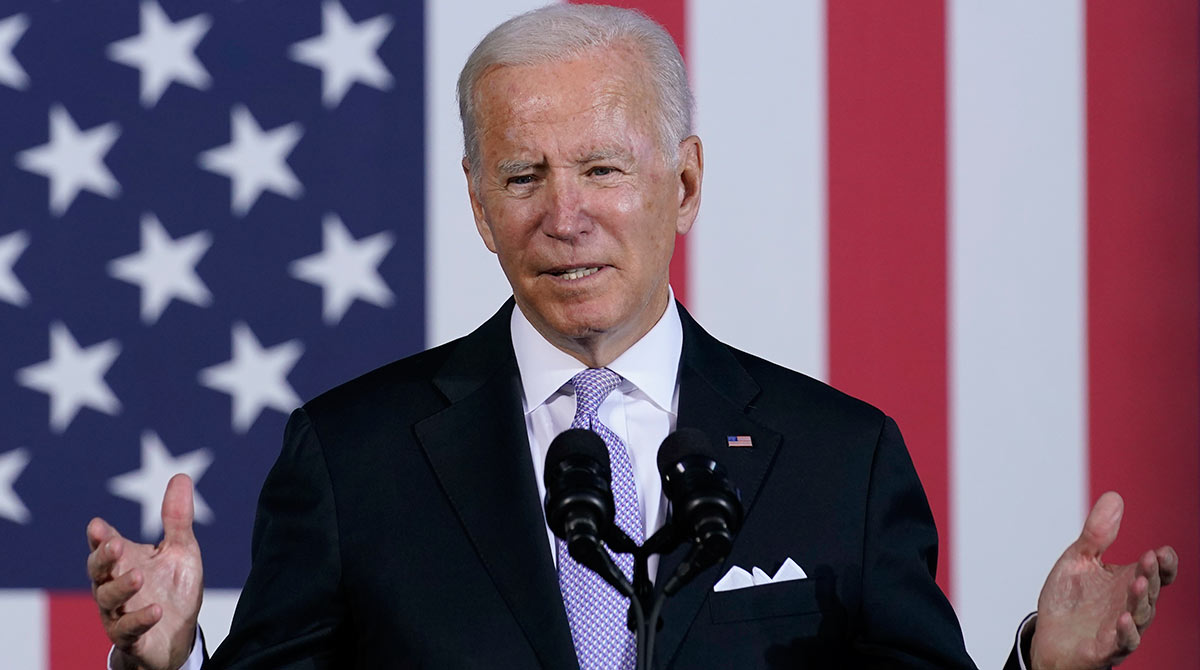 President Joe Biden speaks about his infrastructure plan and his domestic agenda during a visit to the Electric City Trolley Museum in Scranton, Pa., on Oct. 20. (Susan Walsh/AP)

WASHINGTON — Supply chain bottlenecks at the ports and rising prices for certain goods are indicative of the administration’s inability to respond to the COVID-19-era economy, a large contingent of congressional Republicans told President Joe Biden.

Concerns about the leap in fuel prices were also expressed.

In a letter signed by 160 Republicans from the U.S. House of Representatives, the lawmakers point to policy directives and proposals from Biden and his senior team as a culprit for slowdowns at commercial seaports, and a steady spike in the cost of consumer products.

These members of the House GOP caucus also push back on the president’s Build Back Better multitrillion-dollar physical and social infrastructure plan. Legislation reflecting the president’s domestic agenda has yet to clear Congress.

“The policies of your presidency and party’s leaders in Congress are exacerbating or simply ignoring the underlying supply chain crisis. These policies include the mishandling of the COVID[-19] response that are prolonging unemployment and worker shortages across the economy, and your push for a multitrillion-dollar spending spree that is driving up prices of everything from gas to groceries,” the GOP members wrote Biden in a letter. “These efforts only serve to weaken American competitiveness and shrink our economy, and they will certainly ensure that this Christmas will not be merry.”

House Republicans, such as Transportation and Infrastructure Committee ranking member Rep. Sam Graves of Missouri, and Minority Leader Kevin McCarthy of California, continued, “Unless you reverse course and take immediate action, we fear that your policies will not only imperil the upcoming holiday season, but will also result in long-term economic damage.”

“Filling up at the pump today is the most expensive that it’s been in seven years,” Barrasso said. “It’s $1 more a gallon, which is about $25 more to fill up your vehicle. So, that’s a real bite into the paychecks of hard-working Americans.”

Senate Minority Whip John Thune of South Dakota noted, “Winter is coming and it’s going to, if the Biden administration policies continue to persist, it’s going to be an expensive one for the American people.”

Meanwhile, Democrats continue to negotiate proposals for a multitrillion-dollar social infrastructure budget bill. Concerns from House moderates, as well as Sens. Kyrsten Sinema of Arizona and Joe Manchin of West Virginia, are contributing to the likely removal of certain climate change provisions, health care measures and community college benefits. Eliminating such proposals would bring the budget legislation to about $2 trillion.

Senate Leader Chuck Schumer (D-N.Y.) and Speaker Nancy Pelosi (D-Calif.) were pushing on a $3.5 trillion budget bill that would be considered via a fast-track process known as reconciliation.

“It would be a dereliction of duty to build the infrastructure of America without doing so in a green way that protects the planet. And that is exactly what Build Back Better does. It will help us reach our goals, President Biden’s goals,” Pelosi said Oct. 20.

Moderates within the Democratic caucus continue to push for House approval of a Senate-passed $1 trillion infrastructure bill. The infrastructure legislation includes a multiyear update of federal highway policies.

Today, I met with @POTUS to discuss the importance of passing the Bipartisan Infrastructure Bill this month, and continuing to work on a smartly-targeted, commonsense reconciliation package that’s good for NJ — and can get 51 votes in the Senate.

The president added: “Once again, our competitors are investing. We’re standing still. My Build Back Better plan is designed to get us moving again.”

The 2015 FAST Act highway law is operating on a legislative extension that expires Oct. 31. Government funding authority expires Dec. 3, and the federal debt ceiling is projected to be reached in early December.

Regarding supply chains, the White House announced a commitment meant to facilitate the flow of freight by relying on 24/7 operations at the West Coast ports of Los Angeles and Long Beach. According to Energy Information Administration data released Oct. 18, the national average price of diesel continued to rise, spiking 8.5 cents to $3.671 a gallon.