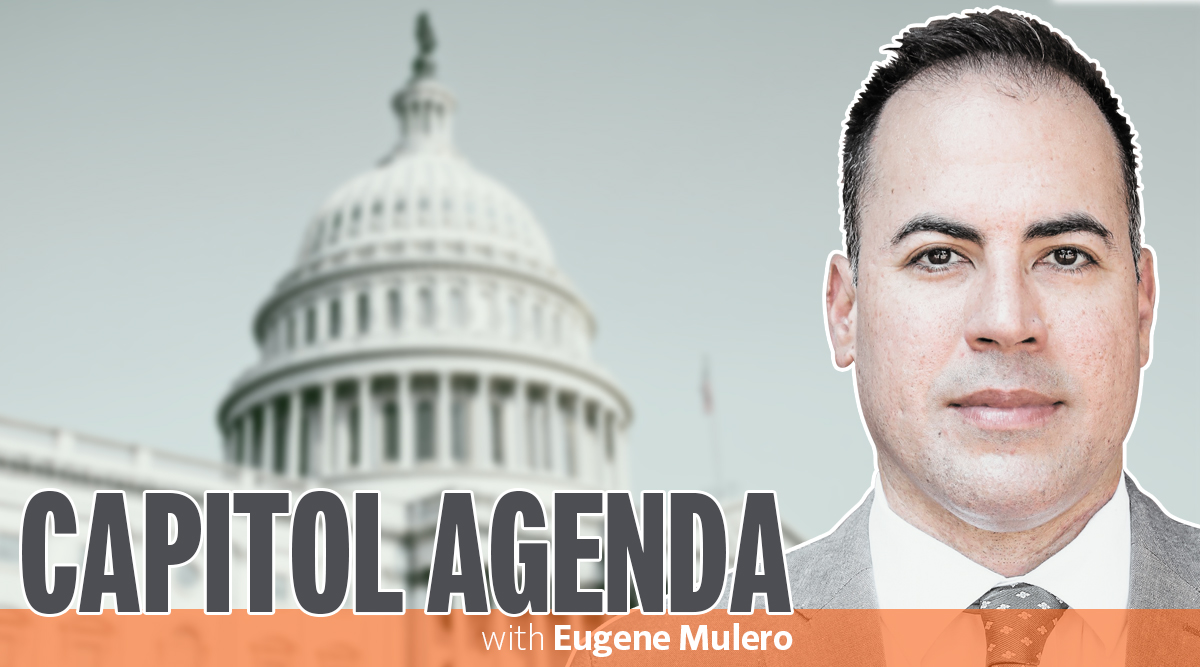 A provision specific to truck drivers younger than 21 included in the Congress-passed $1 trillion infrastructure bill was endorsed by the country’s premier transportation officer.

“The way the provision works is it’s a mentorship type, apprenticeship type of initiative that tries to manage the potential for there to be a safety tradeoff,” Buttigieg told reporters. “We want as many people to be qualified drivers as possible, but never at the expense of safety. And we’ll always look at other, you know, other steps we can take.” 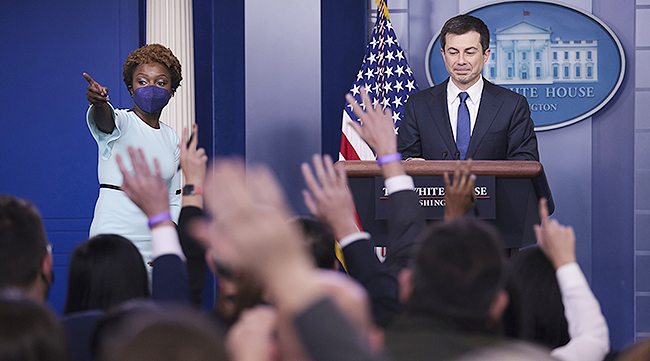 Transportation Secretary Pete Buttigieg, shown with Deputy Press Secretary Karine Jean-Pierre, says, “We want as many people to be qualified drivers as possible, but never at the expense of safety." (Oliver Contreras/Bloomberg News)

The provision would establish a training and apprenticeship program for drivers younger than 21 to operate Class 8 trucks in interstate commerce. The Developing Responsible Individuals for a Vibrant Economy, or DRIVE, Safe Act, was co-sponsored by a bipartisan group of lawmakers. It was endorsed by various industry stakeholders, such as American Trucking Associations.

The trucking-centric provision would take effect upon the bill’s enactment. President Joe Biden has yet to sign the Infrastructure Investment and Jobs Act into law. A White House spokesperson told reporters the president’s team is likely to host a signing ceremony when Congress resumes its legislative schedule the week of Nov. 15.

WASHINGTON — Soon after the Nov. 2 elections in Virginia and New Jersey, and shortly before the U.S. House’s passage of a $1 trillion infrastructure policy package, high-profile Republicans in Congress raised concerns about ongoing supply chain woes. 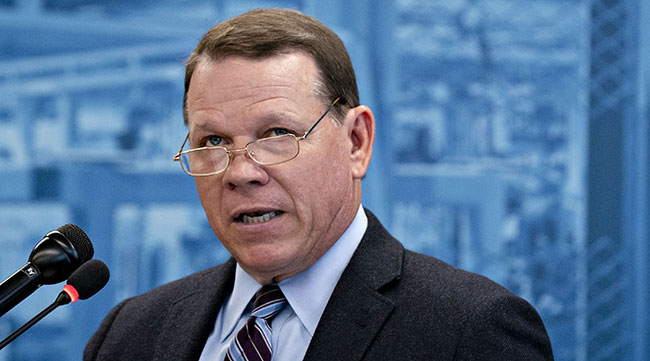 Rep. Sam Graves (R-Mo.) is among the GOP leaders who says President Joe Biden's policies are at fault in the supply chain crises at the ports and for rising food and energy prices. (Andrew Harrer/Bloomberg News)

“This is a complex problem,” Graves told reporters last week, speaking about the supply chain. “The president has got just as much, in terms of being a cause of the problem, as anyone else. And we all need to be working together to try to solve this.”

At a separate event, Graham touched on the supply chain and also took aim at Biden’s multitrillion-dollar Build Back Better social infrastructure budget plan. The House is scheduled to consider the budget reconciliation bill the week of Nov. 15.

“All these programs that are designed to grow the government come with a cost. You know, should the first two years of community college be free, I don’t think so. Everything gets free to the point you can’t afford it,” the senator told reporters. “I want to have a timeout on massive expansion of government and spending until we can get our economy in better shape and have an intelligent discussion about where would we want to go in area of education and providing help to families out there working.”

And, speaking about Biden on Nov. 5, House Republican Leader Kevin McCarthy insisted: “He now asks, as gasoline prices rise to a level they haven’t in seven years, that he writes a letter to OPEC to produce more but tells the producers in America they can’t ’cause he shuts them off of federal land.”

It’s totally backwards. This is what it looks like to put America Last.

“When parents come before the school board meetings, ’cause with COVID they can now see on Zoom what’s being taught in their schools and they want to know what’s being taught to their children, he asks the attorney general to go and investigate the parents,” the Republican leader added. “Every element of his philosophy and policy has been a failure. And it is not my opinion. It’s the opinion of the millions of people who just voted last Tuesday to send him a very clear message.”

The Republicans’ win in the Virginia gubernatorial contest, as well as the photo-finish victory for Democrats in the New Jersey governor’s race, has equipped congressional GOP leaders with political momentum.

Biden, meanwhile, is poised to enact the $1 trillion infrastructure bill into law, as he and his team take a victory lap. He is scheduled to expound potential funding benefits at the Port of Baltimore. His “jobs Cabinet” is in overdrive praising the legislation. “The infrastructure bill will rebuild and replace infrastructure that is decades, or even a century, old. It will promote safety, help us combat the climate crisis, and advance equitable access to transportation,” Secretary of Transportation Pete Buttigieg said.

“I am passionate about the historic investments to ensure all Americans have access to reliable, affordable broadband. There is a stark digital divide in America, which was exacerbated by the pandemic,” Commerce Secretary Gina Raimondo noted.

I am passionate about the historic investments to ensure all Americans have access to reliable, affordable broadband. There is a stark digital divide in America.

Specific to the supply chain, the White House announced it would publish a twice-monthly dashboard detailing metrics tracking progress at the ports of Los Angeles and Long Beach.

In the meantime, freight stakeholders continue to sound the alarm about the supply chain. Jon Samson, American Trucking Associations’ vice president of conferences and executive director for the Agricultural and Food Transporters Conference, recently shared with House lawmakers the industry’s viewpoint.

“The port productivity issues that we’re facing, everybody’s well aware of them and we’re trying, from a carrier angle, to work through the supply chain issues and come out with something that is going to be workable for everyone.” 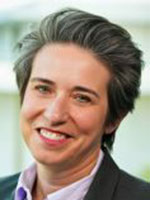 Nov. 12, 2 p.m.: The Center for Strategic and International Studies (CSIS) holds a virtual discussion, beginning at 2 p.m., on “HIV/AIDS and COVID-19: Prospects for an Integrated Response.” Mamadi Yilla, deputy coordinator for multisector relations at the State Department’s Office of the Global AIDS Coordinator and Health Diplomacy

There are some who say congestion is clearing at the ports.

Two bills designed to facilitate recovery efforts for communities and commercial corridors hard-hit by natural disasters recently were approved by the transportation committee in the U.S. House of Representatives. The Small Project Efficient and Effective Disaster (SPEED) Recovery Act, sponsored by the Transportation and Infrastructure panel’s leadership, would seek to expedite disaster recovery efforts, primarily for small rural communities. Specifically, the legislation would seek to streamline the recovery process as well as minimize administrative procedures. The panel also approved the Resilient Assistance for Mitigation for Environmentally Resilient Infrastructure and Construction by Americans (AMERICA) Act. The bill, also introduced by the committee’s leadership, would seek to enhance mitigation and resilience provisions under the Robert T. Stafford Disaster Relief and Emergency Assistance Act.

With the off-year contests over, the political world turned its attention to the 2022 midterms. Specific to the U.S. Senate, the statuses of open-seat races in North Carolina and Pennsylvania are now in sharper focus. The good folks at the Cook Political Report with Amy Walter rate the contests as “toss-ups.” Candidates to watch in Pennsylvania include Lt. Gov. John Fetterman for Democrats and Sean Parnell for Republicans. In North Carolina, former Republican Gov. Pat McCrory is high on the radar, while Democrats work through a crowded field. We’re off to the races, people.

Christmas trees may be harder to find than usual this year, both environmental and economic factors are to blame.

Extreme weather events like wildfires, droughts and floods have made this an especially challenging season for growers. https://t.co/x7thPsboaC

It is crucial to protect Americans’ genetic information from theft by foreign actors like China, and prevent the government from centralizing patients’ personal health records or interfering with their medical decisions.