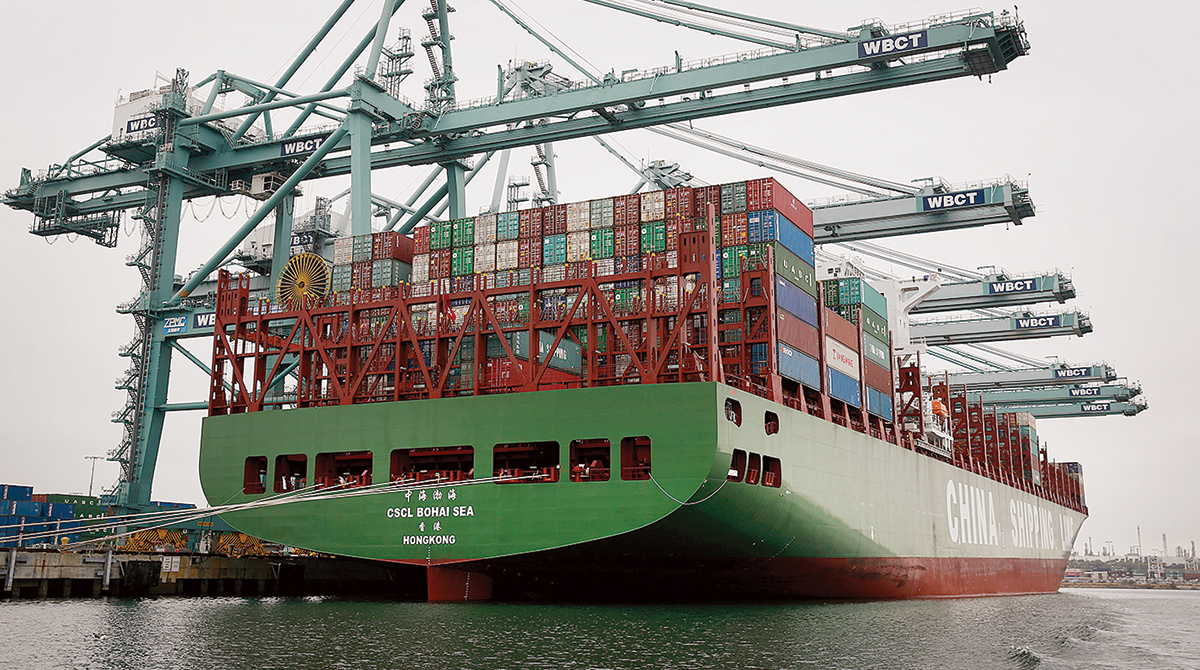 A containership unloaded at the Port of Los Angeles. (Patrick T. Fallon/Bloomberg News)

Ship congestion around the ports of Los Angeles and Long Beach hit an unprecedented level, worsening the bottleneck at the busiest gateway for U.S. imports.

A record 38 containerships are awaiting berth space — 36 at anchor and two that were directed to wait in designated areas at sea until anchorages are available, the Marine Exchange of Southern California said in a note late Jan. 28. It’s the first time since 2004 that so-called drift zones have been used to manage traffic into the neighboring ports.

“This is a problem which does not have a short-term fix,” said Lars Jensen, CEO of SeaIntelligence Consulting in Copenhagen, Denmark.

Just how long it lasts hinges on whether the carriers maintain scheduled sailings to the U.S. or cancel some trips in coming weeks. The best-case scenario to relieve the pressure: a seasonal decline in shipments from Asia after Chinese New Year in mid-February.

“This will dampen the inwards flow of goods by the end of February and give some breathing room to clear the backlog — but that clearing will still take some time,” Jensen said.

Southern California’s main port complex has managed through gridlock before, most recently an episode caused by a labor dispute in 2015. The port infrastructure also threatened to be overwhelmed in 2004 when — three years after China joined the World Trade Organization — dozens of ships laden with Chinese goods also proved a challenge.

The main difference now is cargo ships are even bigger and take longer to unload, and COVID-19 presents a host of workplace challenges on the waterfront.

The vessels floating off Los Angeles have capacity to be carrying almost 300,000 20-foot-equivalent units, according to the marine exchange’s list. L.A. said it is expecting to handle 155,000 inbound containers next week, 80% more than a year ago, and Long Beach estimates taking in just under 100,000.

On top of the sheer volume of the loaded vessels, port authorities are facing another round of inclement weather Jan. 29 that could make for choppy conditions. Earlier this week, strong winds and 17-foot swells prompted several vessels to hoist anchor and seek safety away from shore.

“We do not currently anticipate the storm will be bad enough for ships at anchor to go to sea for storm avoidance, but we’re ready to do so if any ship captains decide to do that,” Kip Louttit, executive director of the marine exchange, said in the note.

For the queued ships, the wait appears to range from several days to nearly two weeks. The ship that’s first in line to move into berth arrived Jan. 16, according to the marine exchange’s latest records. More than a dozen container carriers are scheduled to turn up in the next three days.

Ships are piling up outside Los Angeles and other major U.S. ports as American companies try to restock warehouses and consumers — lacking travel and other entertainment options during the pandemic — buy more products for their homes.

Compounding the logjams are issues on land such as sick longshoremen, social distancing restrictions for those who are working and shortages of equipment and truckers to move the containers.

Companies including Sweden’s Ikea have alerted customers to potential disruptions from global transport delays. Michigan-based appliance maker Whirlpool Corp. is paying more for faster options such as air cargo to get its components and products on time. Other firms are dealing with suppliers that are behind schedule.

“The port situation quite frankly is actually getting worse by the day, not better,” Michael Speetzen, interim CEO of Minnesota-based off-road vehicle maker Polaris Inc., said according to a transcript of a conference call this week. “So we know that we’re going to be fighting that.”