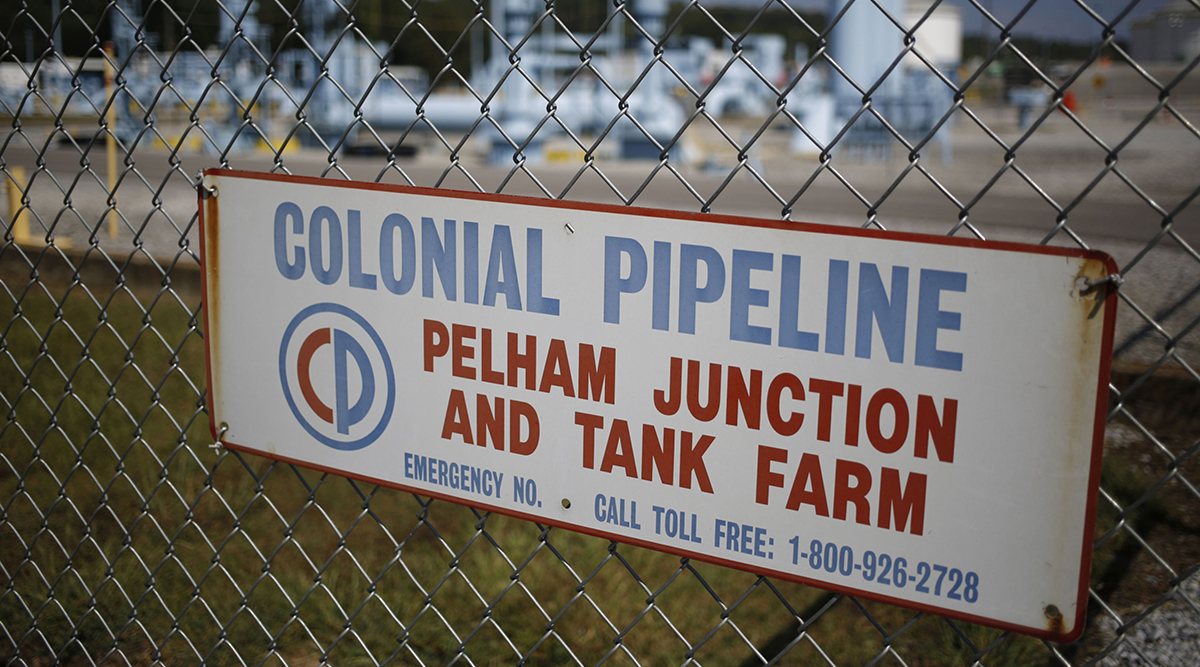 Signage at the Colonial Pipeline Co. in Pelham, Ala. (Luke Sharrett/Bloomberg News)

Traders and shippers are increasingly nervous about the possibility of a shortage of fuel in the eastern U.S. two days after the shutdown of a major pipeline following a cyberattack.

The lack of any update from Colonial Pipeline in more than 24 hours has become a particular source of concern in the market for oil products, which includes gasoline, diesel and jet fuel, according to people familiar the matter.

Traders are already seeking vessels to deliver gasoline that would have otherwise been shipped on the Colonial system, according to other market participants, who asked not to be identified because the information isn’t public. Some tankers are being secured to temporarily store gasoline in the U.S. Gulf in the event of a prolonged shutdown, they said.

Colonial, the nation’s biggest fuel pipeline, halted all operations on its system late May 7 after suffering a cyberattack that affected some of its IT systems. The company has said it’s working to restore operations but has given no timeline for a restart.

The attack comes just as the nation’s energy industry is preparing to meet stronger fuel demand from summer travel and could raise more concerns about inflation as commodity prices from oil to corn rally in a post-pandemic rebound. Americans are once again commuting to the office, planning major travel for the first time and booking flights. A prolonged disruption along the pipeline system threatens to send the national average gasoline price above $3 a gallon for the first time since October 2014, a threshold that often piques concern from federal lawmakers that worry about the impact on consumers.

Colonial is a critical source of gasoline, diesel and jet fuel to the East Coast from the nation’s refining belt along the U.S. Gulf Coast. It has the capacity to send about 2.5 million barrels a day on its system from Houston as far as North Carolina, and another 900,000 barrels a day to New York.

The national gasoline average stood at $2.96 a gallon May 7, according to auto club AAA. With gasoline inventories ample, the pump price wasn’t expected to tick much higher until Memorial Day at the end of May, which is traditionally viewed as the start of the U.S. summer driving season. If the pipeline doesn’t restart soon it will accelerate the move higher.

“I think we’re at strong odds for it by Memorial Day given current trends,” said Patrick De Haan, head of petroleum analysis at Gas Buddy.

A key concern at present is meeting product demand in the U.S. Southeast, which is especially dependent on the Colonial system, people familiar with the situation said. Drivers in landlocked and car-dependent Atlanta may be the first to feel the pinch at the pump.

“Atlanta will be one of the earlier sore spots, along with eastern Tennessee, and perhaps the Carolinas,” De Haan said.

The Northeast can secure gasoline shipments from Europe but it will come at an increasing cost the longer the pipeline stays shut.

“The longer it lasts, the more bullish it will be for refined products on the East Coast,” said Warren Patterson, head of commodities strategy at ING Groep NV. “This will likely also drag European product prices higher, as we see more waterborne cargoes needing to go into the U.S. East Coast to meet the shortfall.”

Airports on the East Coast, which continue to have some of the steepest drops in air traffic due to the pandemic, have been operating smoothly May 9, according to the flight-tracking website FlightAware.com.

In the meantime, fuel producers including Marathon Petroleum Corp. are weighing alternatives for how to ship their products to the Northeast.

One potential route is the Kinder Morgan-operated Plantation Pipeline, even though it only extends as far north as Washington, D.C., and has a capacity of 720,000 barrels a day, far short of Colonial’s. Kinder said May 9 it’s working with customers to accommodate additional barrels during Colonial’s outage, and that Plantation is deferring where possible any non-essential maintenance that might otherwise reduce flow rates.

Inventories offer minimal cover, ClearView Energy Partners said in a research note. Tankers leaving Rotterdam could take up to 14 days to make the trip to the New York Harbor. The Midwest could theoretically send some of its supplies to the East Coast via rail and barge, but the region’s inventories are tighter than in previous years, ClearView said.

“The Colonial outage comes at a critical juncture for the recovering U.S. economy: the start of the summer driving season,” ClearView said. “We therefore think lawmakers could begin a ‘blame game’ immediately, and a sustained disruption that leads to a significant pump price spike could increase prospects of domestic policy interventions.”

Some Gas Pumps Run Dry Due to Panic Buying