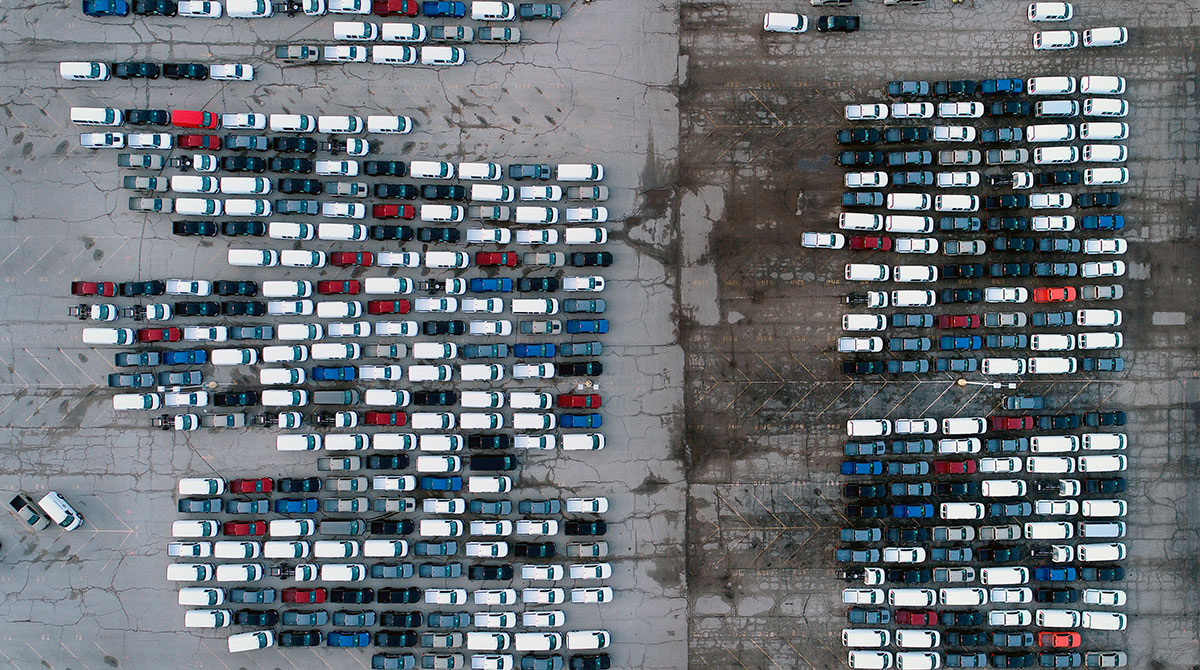 Midsized pickup trucks and full-size vans are parked outside a General Motors assembly plant where they are produced, March 24, in Wentzville, Mo. (Jeff Roberson/AP)

DETROIT — The global shortage of semiconductors has forced General Motors and Ford to further cut production at their North American factories as chip supplies seem to be growing tighter.

The shutdowns likely will crimp dealer inventory of vehicles made at the plants.

GM said it has managed to keep humming factories that make hot-selling and profitable full-size pickup trucks and SUVs.

“GM continues to leverage every available semiconductor to build and ship our most popular and in-demand products,” the company said in a statement April 9.

The chip shortage already has been rippling through various markets since last summer. It has made it difficult for schools to buy enough laptops for students forced to learn from home, delayed the release of popular products such as the iPhone 12 and created mad scrambles to find the latest video game consoles, such as the PlayStation 5.

But things have been getting even worse in recent weeks, particularly in the auto industry, in which factories are shutting down because there aren’t enough chips to finish building vehicles that are starting to look like computers on wheels. The problem recently was compounded by a grounded containership that blocked the Suez Canal for nearly a week, choking off chips headed from Asia to Europe.

These snags are likely to frustrate consumers who can’t find the vehicle they want and sometimes find themselves settling for a lower-end model without as many electronic features. And it threatens to leave a big dent in the industry, which by some estimates stands to lose $60 billion in sales during the first half of this year.

Spring Hill, which makes the Cadillac XT5, XT6 and GMC Acadia SUVs, will shut down the weeks of April 12 and April 19. Production of the Chevrolet Blazer at Ramos Arizpe will stop for a week April 19, while the Lansing Grand River plant, which makes the Chevrolet Camaro and Cadillac CT4 and CT5 sedans, will stay shut down through the week of April 26.

The Lansing Delta Township plant will be down for a week starting April 19, cutting production of the Chevy Traverse and Buick Enclave SUVs, while the Ontario and Kansas plants will be shut down through the week of May 10. Both have been idle since the week of Feb. 8. The Ontario plant makes the Chevrolet Equinox SUV, while the Kansas plant manufactures the Chevy Malibu sedan and Cadillac XT4 SUV.

Also April 8, Ford said it would shut down its Chicago, Flat Rock, Mich., and the Transit van side of the Kansas City Assembly Plant in Claycomo, Mo., during the week of April 12. But seven U.S. plants will run through the two traditional summer shutdown weeks in late June and early July. The Chicago plant makes the Ford Explorer and Lincoln Aviator SUVs, while Flat Rock makes the Mustang sports car.

GM expects the chip shortage to cost it up to $2 billion in pretax profits this year from lost production and sales. Ford is bracing for a similar blow. In addition to GM and Ford, Nissan, Stellantis, Volkswagen and Honda seem to have been hit the hardest.

IHS Markit estimates that from January through March, the chip shortage reduced North American auto production by about 100,000 vehicles. In January of last year, before the pandemic, the U.S. auto industry had enough vehicles to supply 77 days of demand. By February 2021, it was down almost 30% to 55 days. Edmunds.com said discounts are down and prices for new and used vehicles are up.