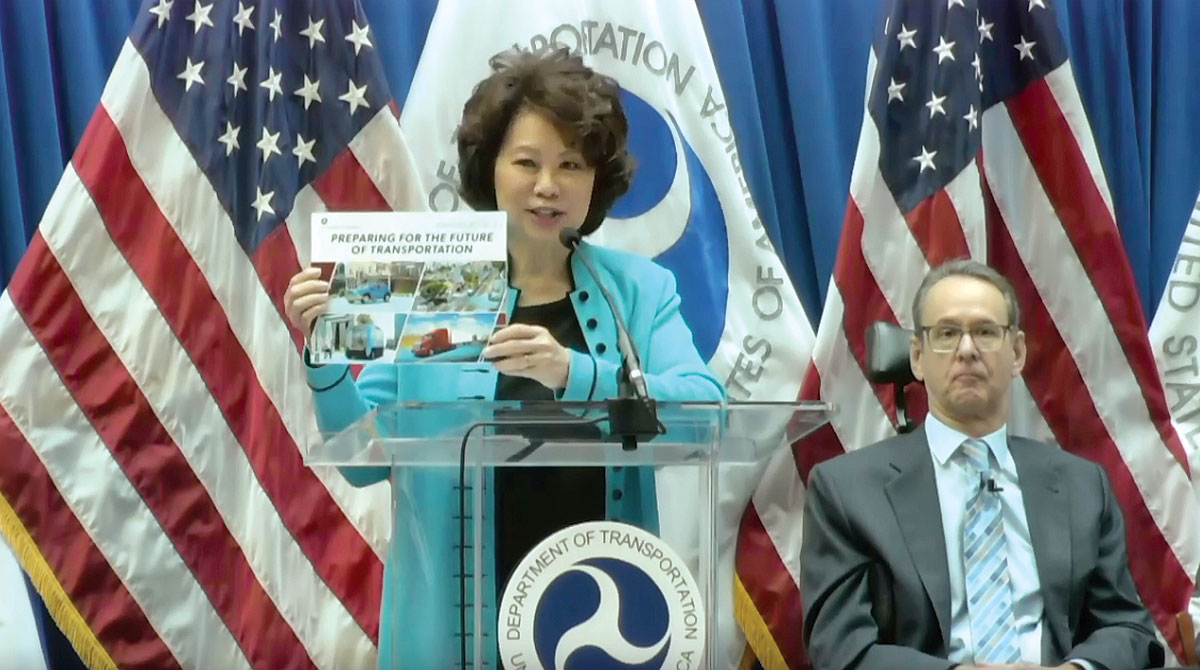 The update, which pertains to trucks, transit systems, cars and trains, highlights six central principles. They indicate that DOT will:

• Protect the freedoms enjoyed by Americans.

“Integrating the autonomous vehicle technology into our transportation system has the potential to increase productivity, facilitate freight movement and create new types of jobs,” Chao said.

Autonomous technology can take a variety of forms, from lane-departure warning systems and automated brakes to truck platooning. Automated technologies have, however, raised public concern over security and privacy; Chao reported that nearly three-fourths of American drivers have expressed fear and anxiety about riding in a self-driving vehicle.

One of autonomous technology’s most important implications is its potential to improve safety on roadways. Noting that 94% of accidents occur because of human error, Chao said that automated technology holds the potential to save lives.

Secretary Chao, "AV technology is moving forward rapidly. AV 3.0 has been posted in the Federal Register for public comment. Your comments and thoughts are welcome, and will be incorporated into the next version of this guidance." https://t.co/TCyRZVwUyL pic.twitter.com/LhxnlGxchS

AV 3.0 outlines best practices for state and local government agencies looking to test and operate autonomous technologies. To support state and local collaboration, the Federal Highway Administration will update the 2009 Manual on Uniform Traffic Control Devices for Streets and Highways, which provides standards for road managers to install and maintain traffic control devices on all public routes. In a media call after the event, FHWA acting Administrator Brandye Hendrickson said the updated manual will be “forward-looking.” Chao acknowledged that incorporating automated technologies into the workforce likely will require new training and new roles.

Some freight haulers have been apprehensive about autonomous vehicle technologies because they foster the perception that trucks soon may be driving themselves. While the trucking industry is contending with a lack of drivers — American Trucking Associations this year has reported the shortage at more than 50,000 — Richard Bishop, an automated vehicle industry analyst who serves as chairman of the Automated Driving and Platooning Task Force of the Technology & Maintenance Council, which is part of American Trucking Associations, said the transition will happen gradually and that it probably will be decades before all trucks are driving themselves.

“I think it’ll happen slowly and there will be ways for existing retraining processes to have their effect,” Bishop told Transport Topics.

Chao recognized the fears associated with losing jobs to machines. At the event, she announced a joint initiative among the departments of Labor, Commerce and Health and Human Services to research the implications of automated vehicle technology on the workforce.

“I am extremely concerned about the impact of automated technology on the workforce,” Chao said, adding that the joint effort “will provide information that will help workers prepare for the future.”

DOT’s previous guidance on automated driving systems, AV 2.0, was published in September 2017. Chao has said that AV 2.0 was the most-viewed DOT policy document posted on the agency’s website, garnering more than 125,000 downloads. 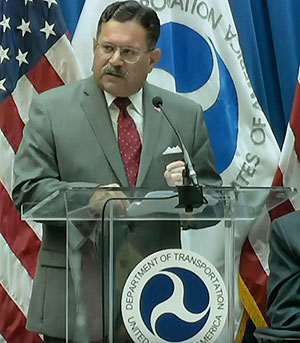 “We recognize and value the unique perspective of drivers, of operators, of carriers and everyone in this industry,” Martinez said. “FMCSA plans to continue engaging the commercial motor vehicle community. This will continue to be a complex and fascinating undertaking.”

ATA President Chris Spear commended DOT’s willingness to hear from industry experts as the agency unveils — and continues to mold — this framework.

“This is a sound and substantive framework that rightly recognizes commercial vehicles are essential to any serious AV policy. In reaching out to a broad group of stakeholders, the Department should be commended for its thoughtful approach, which will enable an informed decision-making process around new and emerging technologies,” Spear said in a statement.

He added, “Thanks to Secretary Chao’s leadership, this guidance ensures that technological progress will not outpace the formation of key safety policy — and will enable America to maintain our role as world leaders both in innovation and in developing this framework. We look forward to working with the Secretary and FMCSA Administrator Martinez as this initiative rolls forward, and to having trucking’s voice as a vital contributor throughout this process.”