CEOs of Dana, Wabash Say Their Role Is to Embrace Innovation 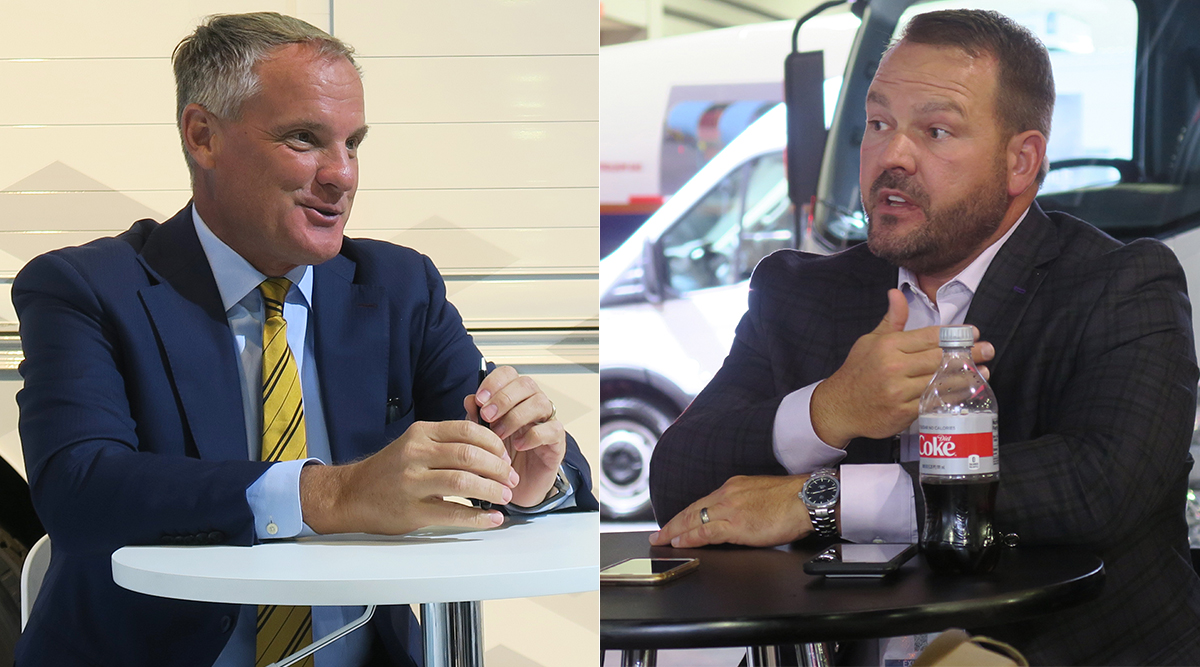 ATLANTA — Broad, innovative change is at hand for the commercial vehicle industry, and this moment has executives’ full attention, a pair of CEOs of large suppliers said.

Dana CEO James Kamsickas likened the moment to a poker game when you have to go all in, pushing stacks of chips to the center of the table, to win.

They made their remarks in separate interviews with Transport Topics Oct. 28, at the North American Commercial Vehicle Show here.

“I truly believe it’s the fourth industrial revolution that we are coming upon now, not just with electrified vehicles but autonomous and connected vehicles. I think it is totally real,” Kamsickas said.

Dana has spent $300 million on five strategic acquisitions and partnerships beginning in July 2018, to secure its position as a single-source supplier for vehicle electrification.

“We are a $9 billion company, so it wasn’t that material. We got them at the right time. Electrification was so small you weren’t buying big assets like big manufacturing plants, big tooling. We kind of got it at the beginning of the curve,” he said.

But he said running a business is not solely about growth. You have to avoid risk, too.

“We de-risk that investment because we can spread it across all end markets,” he said. “But it should not be lost on anybody, as much as we talk about all of these electrified products and they are critical, still everything comes back to the mechanics of it,” Kamsickas said.

“There is still mechanical engineering related to the axles. If it’s a two- or three-speed transmission, you are still going to have the mechanical piece. You still have to have torque capabilities, and still have to deal with noise, vibration and harshness.

“You need to have the integration between the mechanical and the electric, which is mechatronics,” Kamsickas said. “Then you win. That’s how we look at it anyway.”

“We have been willing to do things from an engineering standpoint to push the envelope in design by listening to our customers and taking what is available in the materials market and bringing it to life. We think it is in our DNA, and trying to capitalize on it now,” said Yeagy.

At NACV, Wabash was showing examples of additional progress and refinements with its molded structural composites refrigerated products, specifically in a truck body and a refrigerated van.

It also was showing its cell core technology, an advanced dry van structural panel that reduces the weight by 300 pounds, “capitalizing and building off of the DuraPlate material, but taking it to a new level,” Yeagy said.

Wabash has been using composites since it launched its DuraPlate model in 1996, the industry’s first composite plate trailer — and now it is starting to use composites in its final-mile products division. On its website, Wabash noted it has diverted more than 1 billion plastic bottles from landfills by using post-consumer resin in the manufacture of DuraPlate.

“It is extremely exciting for us, when you think about how you scale what we do,” Yeagy said. “Especially since we know our customers are broadening beyond traditional truckload — many of them, J.B. Hunt, Amazon.com and others — are now getting into the final-mile space. So how do we look at our channels, our product innovation and our commercial process? All that has to adapt and change with the customers right across our entire business.”

“We have taken the resources that had been spread between three units and moved that to a role that directly reports to me,” Yeagy said.

Wabash has three divisions: commercial trailer products, diversified products and final-mile products. Its share of U.S. total trailer shipments in 2018 was about 19%, or a leading 60,150 trailers. Its 2018 revenue was a record $2.27 billion.

The goal is more efficient use of both human and financial capital, he said.

“For Wabash National, innovation is at the heart of our strategy, so we will prioritize our resources accordingly.”