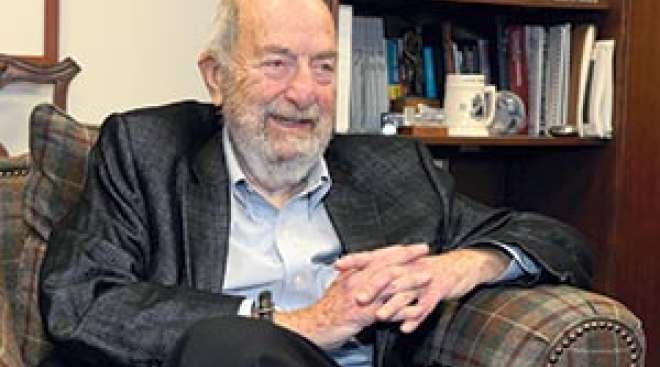 This story appears in the April 25 print edition of Transport Topics.

A native New Yorker and the son of a taxi driver, Russell built the Indianapolis-based company from one truck in 1985 into one of North America’s more prominent motor carriers with more than $1 billion in annual revenue.

Today, Celadon is No. 42 on the Transport Topics Top 100 list of the largest U.S. and Canadian for-­hire carriers.

Russell resigned from the company’s board of directors in December, citing health reasons.

“Steve Russell was a giant in our industry, and his loss will be felt deeply by the many people in and out of trucking who knew him,” said American Trucking Associations President Bill Graves. “Steve came to trucking almost by accident later in life but became a tremendous ambassador for the industry and an important leader within ATA — serving as chairman of both the Homeland Security Committee and the Audit Committee, as well as on the board of directors.”

He also served on the board for the Cornell University Graduate School of Management, the Eiteljorg Museum and the Indianapolis Museum of Art.

Celadon’s story was Russell’s story: a tale of a man with gritty street smarts, pencil­-sharp business acumen, unrelenting drive, an eye for hiring skilled managers and good old­-fashioned hard work — not to mention an admitted dose of luck.

In recent years, Russell remained a guiding force at Celadon but began a gradual transition to put a management team in place, led by current CEO Paul Will.

“It’s a very sad day,” Will said. “He was an interesting, thoughtful and unique individual. He impressed on people to be open and say what you think. He was a friend to the employees, particularly the drivers. He always lived life to the fullest.”

Russell insisted that his employees call him by his first name, and he in turn referred to them by their first names. He was a lover of art and a financial supporter of education.

A memorial service was held at Congregation Beth-El Zedeck in Indianapolis on April 17, and Russell was laid to rest at Beth-El Zedeck’s Memorial Park Cemetery in Fishers, Indiana.

Russell’s son, Jon, remains with Celadon as president of its logistics unit. Russell also is survived by his wife, Olivia, son Stuart and daughter Melissa Rubel.