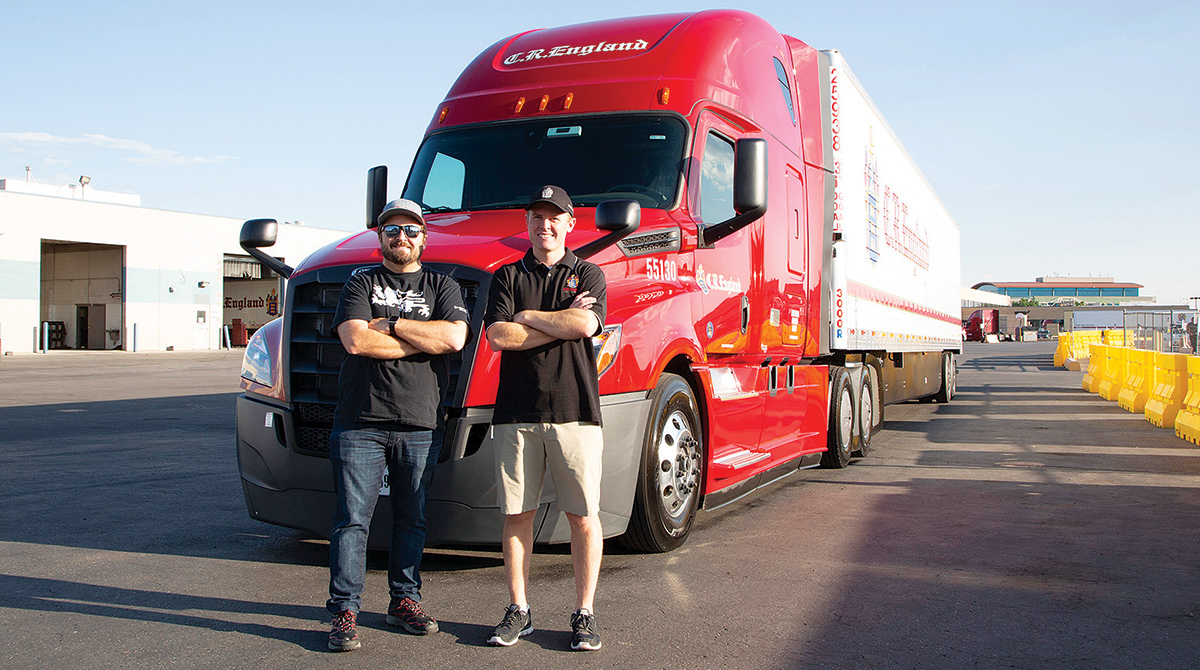 CEO Chad England (left) and President Josh England next to one of their company trucks. (C.R. England Inc.)

More than three dozen managers and front-office employees at C.R. England Inc. have taken classes to earn a commercial driver license at the request of CEO Chad England, who said he believes the experience of learning to drive big rigs will help the company be more responsive to the needs of drivers.

“It was eye-opening,” said David Allred, director of management services for the Salt Lake City-based refrigerated carrier, who recently went out on his first run with a driver trainer after spending six weeks going through C.R. England’s own CDL training program and receiving his learner’s permit.

Allred said he already has implemented changes that will make it easier for drivers to get in and out of terminal facilities and is looking at what the company can do to enhance the work environment for older drivers in the fleet. 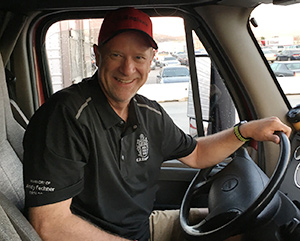 Aaron Shepherd, vice president of schools for C.R. England, said his initial reaction to the idea of getting a CDL was “panic” since he is the guy who oversees the training of some 9,000 students a year at company-owned facilities in Atlanta, Dallas, Indianapolis, Salt Lake City and Fontana, Calif.

Very quickly, Shepherd said, “I went from panic to OK because I liked the idea. We all knew it was a tough job, but going through the process [of getting a CDL] just increased the level of empathy across the board.”

On his first run in April with a driver trainer and another executive, Shepherd said he drove across Donner Pass in the snow on a route from Salt Lake City to Sacramento, Calif. He experienced a flat tire caused by an embedded loose tire chain and saw firsthand how difficult and time consuming it is to find truck parking.

“It’s physically and mentally exhausting,” Shepherd said of his time behind the wheel. 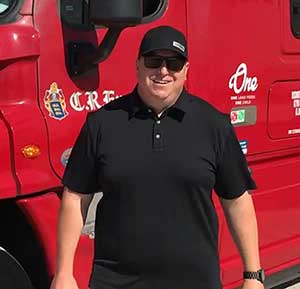 Brandon Harrison, C.R. England's chief sales officer, recently completed his second trip as part of the program. He provided Transport Topics with a digital diary of his journey.

Based on his experience, Shepherd said he has a better understanding of the challenges facing new drivers and he is working with company officials to offer more assistance to drivers on the road and to modify truck cabs to provide more driver comfort features.

“Falling asleep in a truck was a challenge for both of us,” Shepherd said of his time on the road with a fellow executive. “It’s definitely an issue for new drivers.”

In his first trip behind the wheel, Brandon Harrison, C.R. England’s chief sales officer, said he faced what drivers fear the most, which is being forced to wait hours to be unloaded, wasting time that could be spent driving and disrupting schedules for picking up other loads.

“We had a 5 a.m. delivery appointment and came in the night before, but there was nowhere to park,” Harrison recalled. “We found a place and then sat for seven to eight hours, which of course had a ripple effect on our next pickup. I saw that multiple times.”

As a consequence of his experience, Harrison said he has had follow-up conversations with shippers, and many have agreed to provide better facilities and more training for employees to expedite loading and unloading at their facilities. But not everyone is willing or able to help and those “bad actors,” according to Harrison, will face higher shipping charges or lose service.

“I know [delays] happen, but it’s different sitting behind a desk and looking at a computer monitor and being in a truck and it’s hot and there’s no sense of urgency,” Harrison said. “It’s incredibly frustrating.” 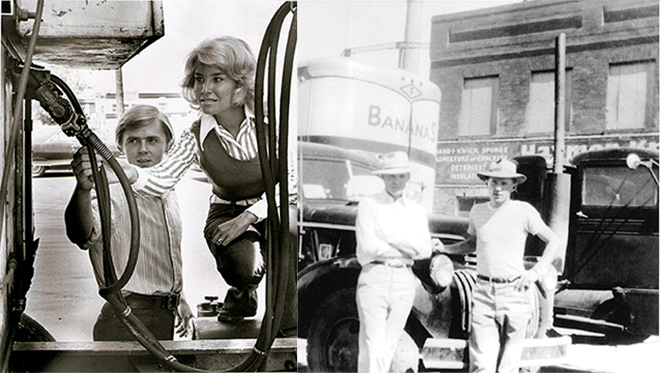 Chad England said he comes from a long line of truckers, beginning with company founder Chester England, followed by brothers Gene and Bill and his father, Dan, all of whom were licensed drivers as well as business executives.

“It’s in my blood,” said England, who got his CDL in 1997 while attending college and who proposed the idea of requiring other management employees to get trained as a way of experiencing firsthand what drivers go through and looking at business issues “through the drivers’ eyes.”

As a result, England said he sees “more empathy” in the boardroom and a willingness of managers to bring up issues of concern to drivers. “It’s refreshing,” he said.

The program is open to all nondriving personnel in the company. “We don’t require it, but if you want to get a CDL, we will give you that opportunity and pay for it,” England said. “We want everyone here to see the world from behind the wheel.”

Couple Get 4 Years in Prison for 2015 Staged Truck Accident