Carriers Pull Out All Stops to Recruit Drivers at MATS 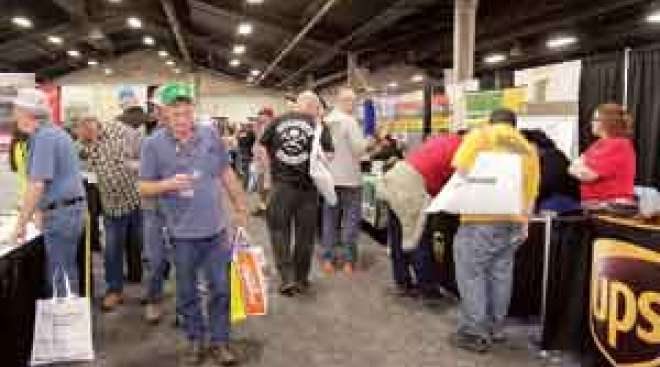 LOUISVILLE, Ky. — Unlike past years at the Mid-America Trucking Show, it was the 100-fleet-strong driver recruiting pavilion in the smaller West Wing of the Kentucky Exposition Center that had the most consistent foot traffic, as the show marked its first year without a single truck maker and several other large suppliers exhibiting in the South Wing, the largest and traditionally busiest section.

One driver-recruiter said, “It’s about pay — that’s what it always comes down to.”

Still, fleets used many approaches to grab the attention of the crowd, which organizers said was 74,937 during the March 31-April 2 show. They displayed new tractors, brought along drivers to answer questions, promoted their pet-friendly policies and promised no travel to New York City.

Truckload carrier Celadon Group parked an International LoneStar at its exhibit space, which Ashley Hay, vice president of driver recruiting and development, said gets noticed for its front grille. She encouraged people to climb into the driver’s seat and told anyone interested in a company position or lease that the average fleet age is only 1½ years old. Just as important, she said, was sharing details of changes to pay packages, still being finalized.

Hay also recommended visiting Celadon subsidiary Quality Cos. in the North Wing, which also had a LoneStar on display.

Refrigerated fleet Prime Inc. brought a Freightliner with an automated manual transmission, which recruiting coordinator Andrea Mueller said would be used in almost every tractor that Prime owns within three years.

“It means more money for drivers because they are more fuel-efficient,” she said.

The nearby Cargo Transporters’ booth demonstrated a Bose Ride system, which allowed drivers to test the vibration-canceling seat while watching a highway video simulation. Shelley Mundy, director of recruiting for Cargo Transporters, said the system “dramatically reduces fatigue” through less torso and upper-body movement when the truck is in motion.

Cargo Transporters also offers amenities such as in-cab EpicVue entertainment and refrigerators but was struggling to find enough quality drivers, despite a recent 17% pay increase over 18 months, Mundy said.

The Bose system — or a $3,000 bonus — was part of the overall pitch from Dart Transit Co. that included leases on 2016 models with no money down. Recruiter Jake Klein said the company was looking for a range of drivers, including recent graduates. He said he expected to get only “six or seven real connections” because of geography or other factors, but every interaction helps “promote the company and put our name out there.”

One owner-operator who stopped by the Dart booth was Robert Tourgee of Lisbon, New York. Tourgee has been driving 30 years and attended MATS with his wife to “feel out some companies” after taking six months away for vacation.

While he spent most of his career hauling flatbed freight, Tourgee said he was open to new opportunities. At a truck show years earlier, he spoke with Dart but never did business with them, he said.

The main questions he had for recruiters were not a surprise: What is the pay structure, and how long will he spend away from home per trip?

John Elliott, CEO of Load One, spent much of the show at his company’s booth in the pavilion, mingling with employees and attendees. He said it was hard to gauge how many drivers at the show were interested in joining in the near term. Instead, the “residual effect” of these interactions is more long-lasting.

He also stressed the importance of shows such as MATS on “the retention side of the driver issue,” allowing them to experience the show for themselves and to feel proud about who they are and where they work.

Kyle Palucis, director of contractor development, recruiting and retention for Cowan Systems, said he was looking for people “whose passion is to own the truck.” They were among the fleets emphasizing its lease-to-purchase option, especially for its 3-year-old dedicated division.

He also said he believed Cowan offers a more personalized level of support from fuel purchasing and driving tips to business operational assistance than competing fleets.

Wal-Mart Transportation, one of the few private fleets, created an information packet specifically for the show that promoted its environmentally friendly — aerodynamics, emissions controls — truck fleet and efforts in their communities.

“Supported by their local office, our drivers have the opportunity to make a difference and change lives,” the brochure says.

Carrie Hallett Paris, senior manager of transportation recruiting, said Wal-Mart has between 150 and 160 open positions. The company brought drivers to the show who worked in shifts to interact with attendees and answer questions about schedules and pay.

Though everyone knows Wal-Mart, that was not the case with XPO Logistics. Employees said several people inquired about the company, unaware of its recent buying spree that included Con-way Inc. in September. XPO had the most thorough benefits information available, including locations for free truck washes, mentions of performance awards and maintenance rates for owner-operators.

Truckload carrier U.S. Xpress Enterprises could hire an almost unlimited number of experienced drivers, recruiter Amy Hobbs said. For company drivers, literature from the Chattanooga, Tennessee, fleet suggested that solo drivers who become trainers have the possibility of earning as much as $110,000 annually. It also was offering special leases and sign-on bonuses for team drivers on 2017 model-year trucks.

Fleets also were promoting the use of smartphone apps and other software to speed payments and eliminate paperwork. Military-veteran bonuses, guaranteed detention compensation, paid orientation and time off were other common benefits promoted in company brochures.