Cancer Survivor’s Road to Recovery Culminates With Trip to NTDC 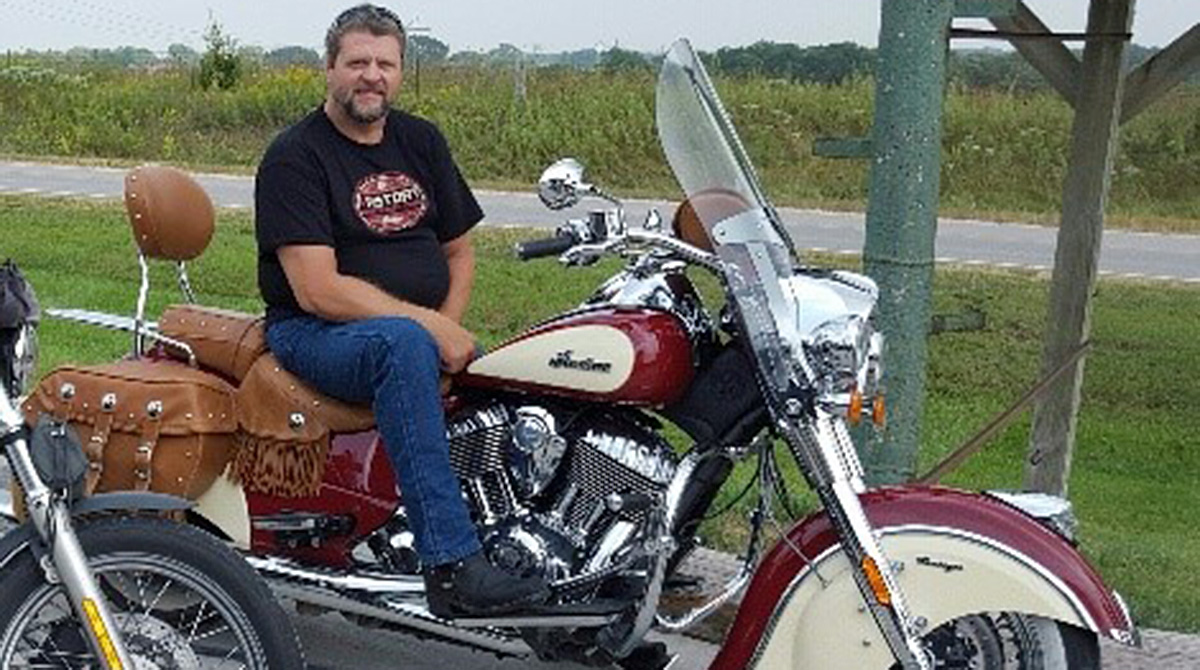 Kevin Mailand promised he would buy himself an Indian Motorcycle, a bike he has admired since his childhood, one year after undergoing surgery. (Family photo)

Kevin Mailand’s biggest challenge in becoming Grand Champion at the 2019 Kansas Truck Driving Championships was not maneuvering a 3-axle rig or scoring high on a written exam. It was getting to Topeka in the first place. Five years earlier, he was diagnosed with advanced Stage 3 esophageal cancer and given just an 18% chance to live.

Mailand, 57, a 35-year veteran of longhaul trucking, is on his way to Pittsburgh for the National Truck Driving Championships on Aug. 14-17. In 2014, he was en route to California on a delivery when he got the news that would change his life.

“Actually, I went in for a colonoscopy, and the doctor asked when I went in if they could scope the upper [gastrointestinal tract] and lower,” said Mailand, a YRC Freight driver for the past 21 years.

He was in Albuquerque, N.M., when he got an urgent call from Michelle Mailand, his wife of 34 years. She said he needed to call his doctor that night at 7 o’clock. 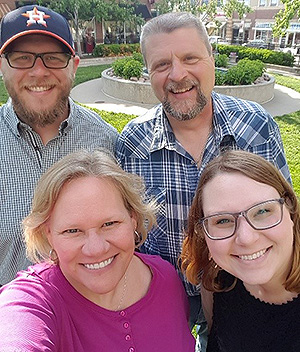 Kevin Mailand with wife Michelle and children Brandon and Brittany in 2017. (Family photo)

“I had my suspicions ahead of time,” Michelle said. “I could tell by the [receptionist’s] voice that she was trying to hold back tears.”

Kevin said: “[The doctor] said I needed to get in and get checked right now. So not only do I get this news, I get it over the phone.”

On Feb. 3, 2014, the diagnosis was delivered. If the cancer had progressed into the fourth stage, Michelle said, treatment would have been palliative care, the purpose of which is to make the patient comfortable.

Mailand relied on his wry sense of humor when he told his wife of the disease — only 1 in 5 survive the first five years after being diagnosed, according to some medical estimates.

“I called Michelle, and she started crying. I said, ‘Hey, there are upsides to this. I can eat cake,’ ”Mailand chuckled, noting he’s also diabetic.

He then paused. “But you do wonder what’s next.”

Michelle’s first step was to make a phone call — to a mortuary.

“I’m the type that prepares for the worst but hopes for the best,” she said. “I was going to not only have to take care of him, I had a family to hold together,” referring to son Brandon and daughter Brittany, now ages 29 and 27, respectively. “If things didn’t go right, I didn’t want to plan for a funeral at the end.” 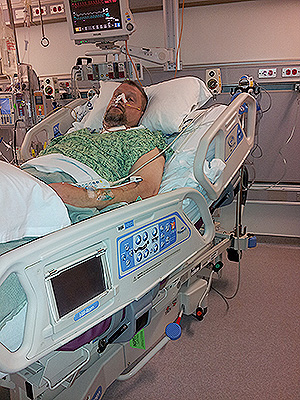 “As far as the cancer goes, he really took it in stride,” Brandon said in an e-mail. “We only talked about the worst-case scenario one time, man to man. He never let my sister and I see him defeated.”

Mailand had a reference point for his condition. His mother died in 2002 after a six-month battle with cancer of unknown origin because of its advanced stage when it was discovered. She was 62.

Knowledge can be one of the most useful tools in combating cancer. To that end, Michelle immersed herself in researching the subject. Also, she has an aunt, Kim Kimminau, who is a teaching doctor at University of Kansas Medical Center in Kansas City, about 45 miles from the Mailands’ home in Lawrence.

“She helped us get through the process,” Kevin said.

Reflecting on his mother’s passing, Mailand had to make a decision. His treatment would consist of 28 rounds of radiation, five rounds of chemotherapy, and surgery to remove his esophagus and two-thirds of his stomach.

“If all I’m getting is six months, I may pass on this,” he thought at the time.

Ultimately, he decided it was a risk worth taking.

His care proved to be a coordinated effort.

“They work as a team at KU Med, the oncologist, the radiologist and the surgeons. They told me at that time they thought they could get it all out,” he said.

When time came for the radiation and chemo sessions, transportation to the medical center wasn’t a consideration. He grabbed his keys.

“I told myself I was going to drive to each one of them, and I did it,” Mailand said.

Radiation was a matter of getting “zapped” in targeted areas, a five-days-a-week process that usually required about 10 minutes in the office.

Chemotherapy, administered on Fridays, was another matter, and yet his humor didn’t abandon him.

“The nurse would come in and she would be gowned up, gloved up, masked up,” he said. “ ‘This stuff is nasty, and you don’t want it on you,’ ” she told him.

Mailand said he probably could have worked during the course of his sessions but opted to play it safe.

“Driving a truck is different from most jobs,” he said, citing potential perils of the road. “If I had an office job, I probably could have worked.”

Mailand has been with YRC Freight for 21 of his 35 years as a professional truck driver. (Family photo)

Radiation and chemotherapy were “a piece of cake” compared with what awaited.

Surgery was scheduled after an eight-week interval to allow for Mailand’s red blood cell count to rise.

His doctor strongly warned him of the operation’s severity, and yet the patient still could crack a joke.

“ ‘This is major, major surgery.’ He told me probably four times this is major. ‘I got it, doc. I’ve had my tonsils out,’ ” Mailand said with a laugh. “Most physicians don’t know how to handle me.”

He paused. “Cancer is such a dour diagnosis.” 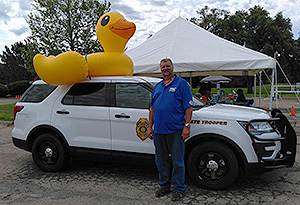 The six-hour surgery involved removing the esophagus from the membrane that connects to the spinal column, then creating a new esophagus (a “stomophagus,” Michelle says Kevin jokingly calls it) from tissue from the one-third of his stomach that wasn’t removed.

Mailand had T-shirts made for different phases of his treatment. A St. Patrick’s Day-themed shirt had the chemistry symbol for radiation with the words “Kiss Me I’m Hot.”

“I don’t think the [medical staff] quite knew how to take me,” Mailand said. “I saw the same people most every day. It was so glum. I said, ‘Come on, people! We’re going to beat this.’ ”

Looking back, Mailand said there were warning signs.

“I had trouble swallowing for maybe a year and a half. Bread would be clumpy, and I had to drink a lot of water to get it down.” 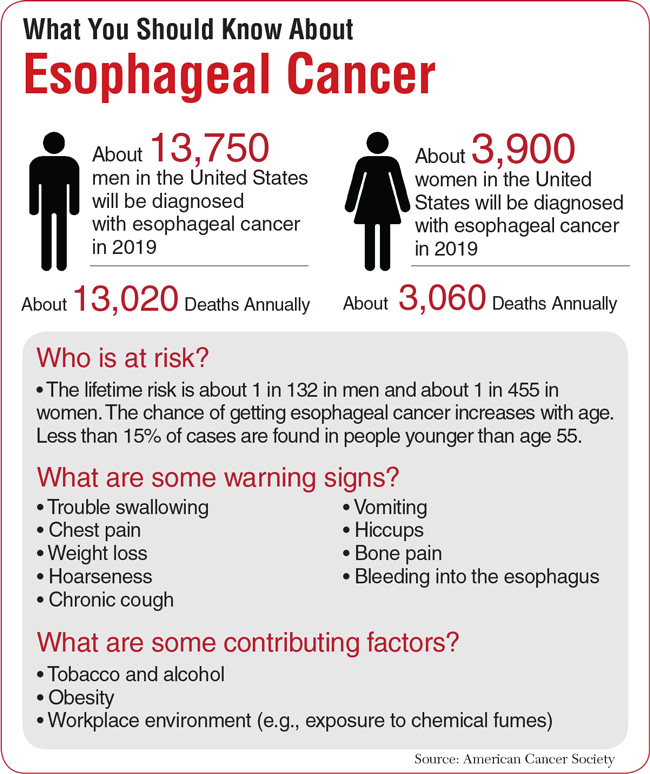 Mailand wants his battle to be a cautionary tale, particularly for other truckers who may be susceptible to poor nutrition, long hours on the road and irregular sleep. He doesn’t draw a direct correlation between those symptoms and esophagus cancer, but they could be contributing factors.

“If you have trouble swallowing, get it checked out,” he said.

He also is an unabashed advocate for screening. “Prostate exams for men. Don’t be one of those that say, ‘I’m not doing that.’ Go get checked.”

This past May 23, Mailand was declared cancer-free.

Daughter Brittany said that a great weight had been lifted from the whole family.

“I feel like we have all been holding our breath the past five years, thinking we could lose him at any time,” she said in an e-mail. “Five years was always the marker. If he could get past that statistic then everything would be OK, so this was a big year for us.

“I can start thinking about the future again and not have those thoughts creep in that Papa won’t be there for those life events like marriage and kids.”

Kevin Mailand loves the freedom that comes with driving a truck. It’s an inherited trait; his father drove trucks and competed in truck driving championships in the late 1970s and early ’80s. 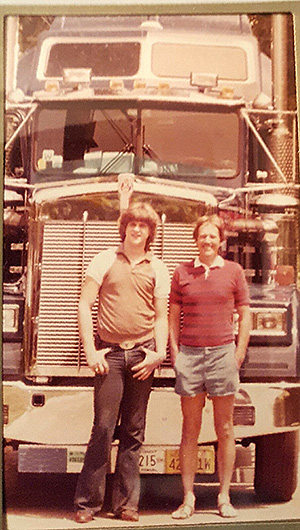 Mailand with his future father-in-law, Michael Lechtenberg,  in 1985. In the background is a Kenworth Liberty Limited Edition, the first truck Mailand and his wife owned. (Family photo)

“I will say, he’s probably the best driver I’ve ever seen. And I say that with bias. Those old guys have had done so much with a lot less equipment,” Mailand said.

And on the road, you are your boss.

“I don’t do well in an office setting,” he said recently from Salt Lake City while on a team route. “I need to be out. Out here, nobody is looking over your shoulder.”

One adjustment he has had to make is sleeping on an incline to keep acid reflux in check. To that end, he takes along a board with hinges that goes under the mattress and connects to the cab, allowing him to keep his head elevated.

Kent Durant is Area 10 safety manager for YRC Freight. An America’s Road Team captain for 2007-09, he said caring and compliance were essential.

“First thing, of course, is compassion for the family,” Durant said.

Once Mailand was treated and ready to work, there was the matter of assessing his health in terms of physical preparedness and the Department of Transportation’s regulatory framework. Information was shared between family and work doctors so that every positive step could be documented.

By August 2014, Mailand had resumed driving. He started with shorter routes as he regained the stamina required to handle his normal runs that take him to the Pacific Northwest.

“We’ll definitely put you out there as long as things are in compliance,” Durant said, citing the industrywide truck driver shortage.

Mailand’s love of the open road extends to one of his passions, motorcycles. He’s had several since he was about 18, but his current one, an Indian Motorcycle, holds special meaning.

“The Indian came about as a result of my cancer. I had told myself that if I got through this, I would get one,” Mailand said.

One year after surgery, he fulfilled a lifelong dream and bought the motorcycle he had admired since he was a small child.

“During that first year, he put over 10,000 miles on that bike while working full time and riding mostly on the weekends,” son Brandon said.

Recently, Mailand took it on a 3,400-mile, round-trip ride from Kansas to Las Vegas to see his father. On the first night, a storm set in. He was able to find a pull-off, which was being occupied by a truck. The driver invited Mailand to pull up alongside his rig. 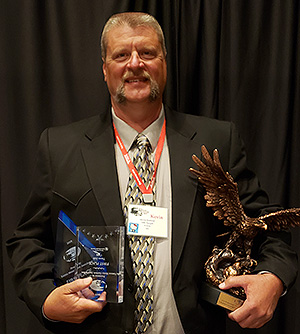 Mailand with his trophy haul from the 2019 Kansas Truck Driving Championships.
(Family photo)

That, Mailand said, embodies the camaraderie of the drivers he sees at Kansas Truck Driving Championships, held every year on Father’s Day weekend.

“For me, it’s mostly about seeing the same guys — and ladies — and making friendships. It’s the least competitive competition I know,” he said of this year’s event at Kansas Expocentre in Topeka on June14-15. “[2012 national Grand Champion] Don Logan has set the bar extremely high in the state of Kansas, but that’s a good thing. It makes each of us be that much better.”

Mailand likened driving in a TDC to playing golf.

“You’re competing against yourself, proving what you can do for yourself.”

He remembers a rough outing in his first go-round on the national stage in 2009 after winning state Rookie of the Year honors. That would be in Pittsburgh, where 10 years later he’s headed back for another shot.

He has. All the way.