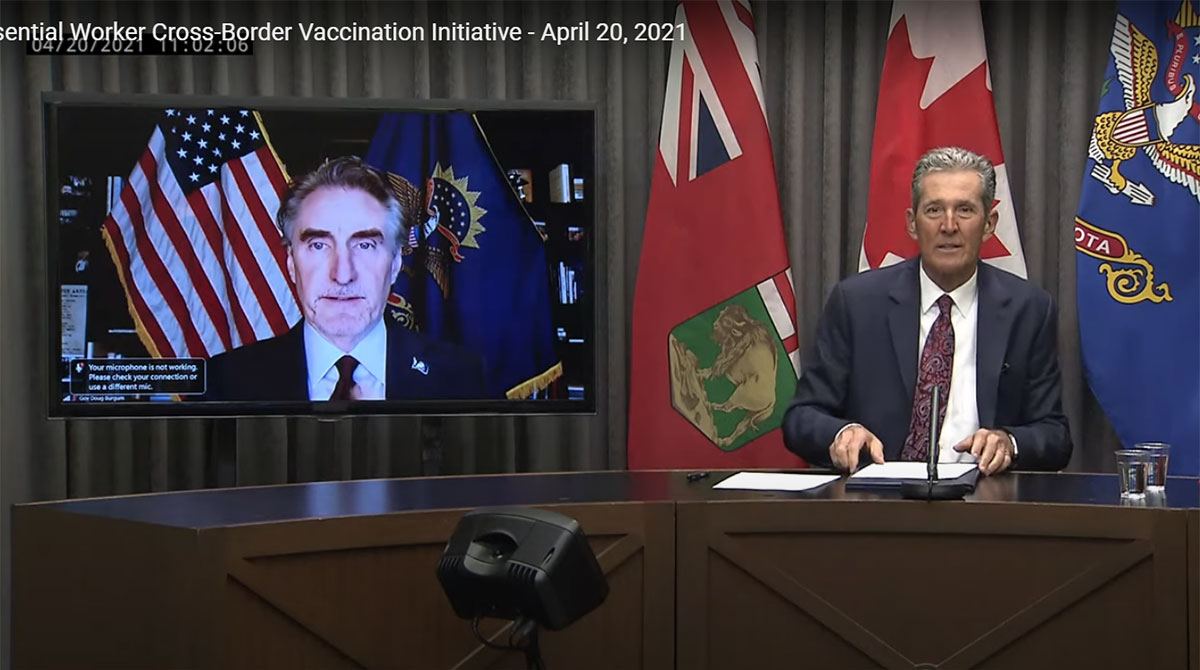 Leaders from North Dakota and two Canadian provinces have reached agreements to offer COVID-19 vaccinations to Canada-based truckers who cross the border to deliver goods.

The initiative is meant to help truckers who support provincial and state economies by regularly hauling goods across the border.

“With adequate vaccine supplies and all North Dakotans having access to vaccine while Canada is dealing with a vaccine shortage, we want to do our part to ensure essential workers from Canada who are frequently traveling through our state are vaccinated,” Burgum said. “The timely and effective administration of vaccines is essential for public health and the eventual safe reopening of our shared border.”

Government officials and trucking industry representatives will work together to identify eligible individuals and schedule vaccination appointments for truck drivers during their routine trips to the U.S. over the next six to eight weeks.

The North Dakota Department of Transportation’s rest area near Drayton will serve as an initial vaccination site. It will also be open to North Dakotans age 16 or older to get vaccinated. Located along Interstate 29, Drayton lies across the Red River from Minnesota, about 31 miles south of the Canadian border. An additional site has been approved near the Saskatchewan border crossing point to vaccinate truckers and energy workers from the province who regularly cross the border. An appropriate location for this site has yet to be announced.

“The Saskatchewan Trucking Association knows how critical vaccines are to fighting COVID-19 and is pleased to see the partnership between North Dakota and Saskatchewan,” said Susan Ewart, executive director of the Saskatchewan Trucking Association. “Providing necessary vaccines to professional drivers and oil field workers crossing the border will ensure the safety and protection of these workers as they continue to drive the economy.”

The North Dakota Department of Health will provide nurses and staff members to administer first and second doses. Participating truckers must commit to getting both of their shots in North Dakota.

We are grateful to @PremierScottMoe for his partnership on this initiative, which will ensure the safe delivery of goods and services across the border and strengthen the longstanding friendly relationship between North Dakota and our northern neighbors. https://t.co/c84cW1iik0 — Gov. Doug Burgum (@DougBurgum) April 28, 2021

Manitoba Trucking Association Executive Director Terry Shaw said part of the initiative’s beauty is its simplicity, as it allows drivers to get vaccinated during their routine dispatches. In Manitoba, vaccine eligibility is still restricted to certain groups. Shaw also pointed out the waiting time between doses in Manitoba is three to four months. In the United States, the waiting time is three to four weeks.

“These truck drivers will be completely vaccinated much, much quicker through this North Dakota program than they will in Canada,” Shaw told Transport Topics. “We’re not even at the point in Manitoba where, if you want a vaccine, you can go get it. North Dakota had more vaccines than arms and Manitoba had more arms than vaccines.”

Manitoba and Saskatchewan represent important economic partners for the United States. According to the Bureau of Transportation Statistics, the port of entry at Pembina, N.D., which sits alongside I-29 and links to Manitoba, experienced 217,992 truck crossings in 2020. The facility at Portal, N.D., which connects to Saskatchewan, processed 80,101 truck crossings in 2020, according to BTS data.

Shaw pointed out that not all commercial truck traffic that passes through this corridor originates in Manitoba and terminates in North Dakota. He said loads originate in other provinces, such as Saskatchewan and Alberta, and travel through North Dakota to the southern states.