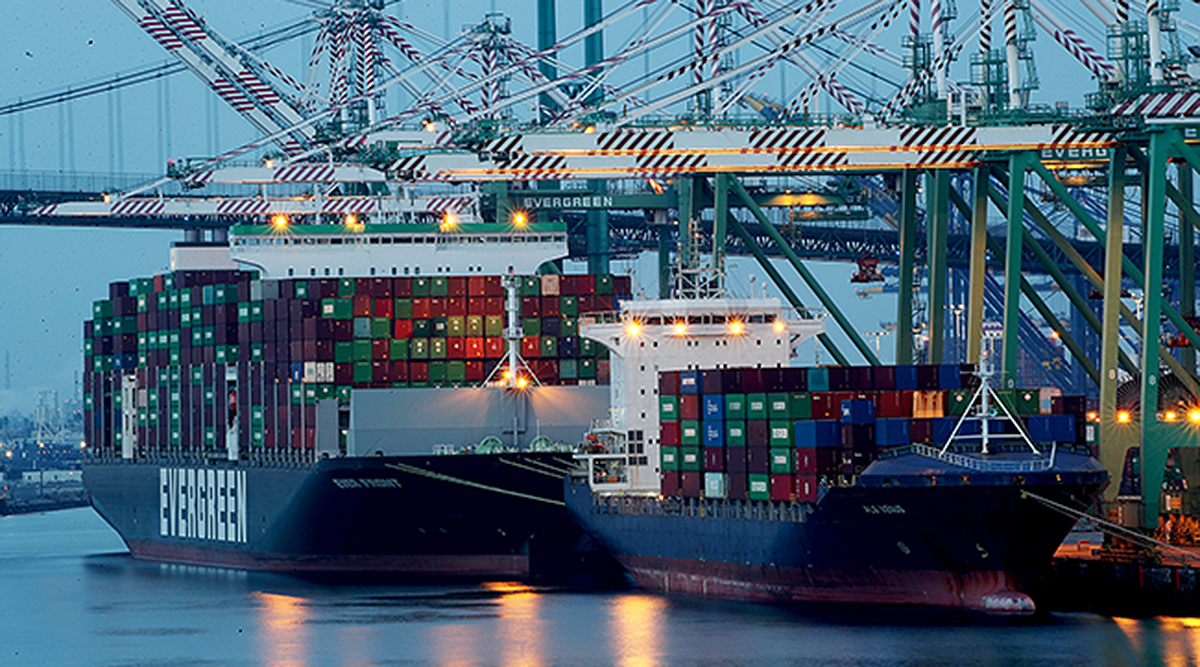 LOS ANGELES — When Janet Schaaf-Gunter peered through the window at San Pedro Bay last year, she saw so many cargo ships it looked as if Southern California was on the brink of an invasion.

As a veil of gray exhaust settled over the ports of Los Angeles and Long Beach, Schaaf-Gunter worried about how much more diesel pollution she and her neighbors would be inhaling during the shipping logjam.

“I’m looking out my window, and I have a view of the harbor, which is lovely — and used to be more lovely,” said Schaaf-Gunter, a member of San Pedro Peninsula Homeowners United. “And I’m seeing dozens of ships that are along our coast sitting out there spewing.”

At the Port of Los Angeles, cancer-causing diesel particulate matter rose 56% compared with 2020. The emissions of nitrogen oxides, the precursor to smog, increased 54% while lung-irritating sulfur oxides rose 145%. 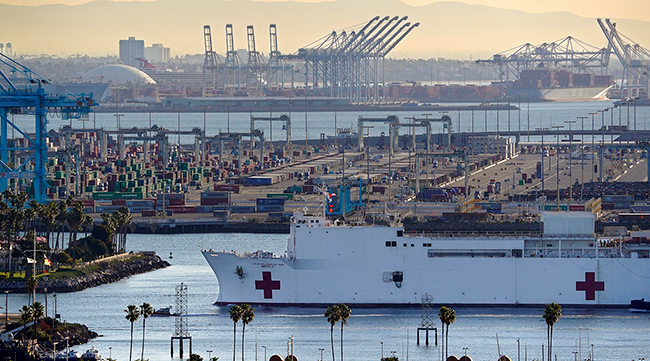 The USNS Mercy enters the Port of Los Angeles. Port officials say that pandemic-based surges in demand are to blame for increased emissions in 2021. (Mark J. Terrill/Associated Press)

The report has outraged neighborhood activists and clean air advocates, who say the ports are failing on promises to mitigate the effects of port activity on air quality.

For their part, the ports say the surge was an anomaly, and that they’ve taken steps to reduce the health effects of future slowdowns. Although the increase in pollution was substantial, officials said emissions are still much lower than levels in the mid-2000s.

“We’ve been talking for years about how an efficient supply chain means lower emissions,” said Eugene Seroka, Port of L.A. executive director. “Now, we have a pure case study to show what an inefficient supply chain does to our environment. It’s been a call to action for all of us in this profession.”

The emissions surge has highlighted unexpected difficulties the ports are facing attempting to reduce harmful emissions and greenhouse gasses. While an initiative to increase the use of zero-emission electric trucks has been stymied by the expense of such technology, the ports also abandoned clean-air powering systems for ships at berth when a record heat wave threatened to overload the power grid in September.

Ocean-faring ships and freight-moving equipment were largely responsible for the 2021 surge in air pollution.

Last year, both ports witnessed a 16% rise in cargo movement as the COVID-19 pandemic stoked demand for e-commerce goods. However, ocean-faring ships tarried in San Pedro Bay as crews struggled to keep up with the pace.

The workforce was also hampered by COVID-19 and pandemic-related precautions that limited the number of crews moving cargo from ships to trucks and trains. Farther inland, some warehouses and distribution centers had also reached storage capacity and suffered labor shortages.

In November 2021, 114 ships were either anchored or loitering in San Pedro Bay waiting to dock.

“All of this led to a system that was not functioning anywhere near optimum efficiency,” Seroka said.

Seroka and other port officials say they have created new procedures they hope will prevent congestion during times of heavy ship traffic.

Ships are now required to reduce speed and slow steam toward the ports during periods of congestion, and they are also prohibited from idling within 150 miles of shore to avoid ships gathering outside the breakwater.

However, Schaff-Gunter and other residents say such policy changes have been slow to arrive. “While the port pats itself on the back about their decision to finally move the armada of spewing ships awaiting terminal space 150 miles off our shore, that decision was made only after the local community complained about the horrific situation,” she said. 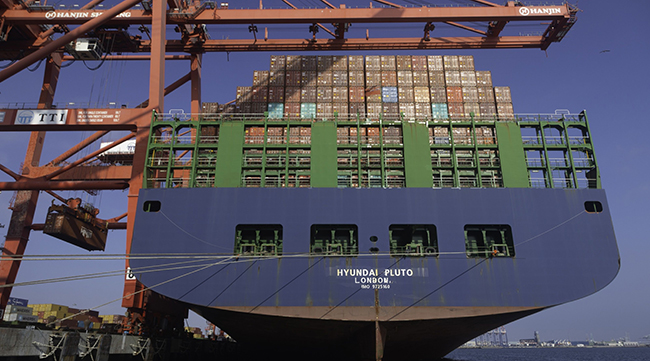 Cargo is loaded at the Port of Long Beach. (Tim Rue/Bloomberg News)

The port complex emits around 100 tons of nitrogen oxides each day — surpassing the amount emitted daily from the region’s 6 million cars — making it the largest fixed source of smog- and particulate-forming pollution in Southern California, according to the South Coast Air Quality Management District. The predominately working-class, Latino communities surrounding the ports withstand the highest percentile of diesel particulate pollution statewide, according to CalEnviroScreen, an online tool that assesses environmental pollution.

But the twin ports are also an economic juggernaut and support about 3 million jobs, officials say. The complex serves as a gateway for about 40% of the nation’s containerized cargo imports. (The Port of L.A., alone, is the largest port in the Western Hemisphere, handling $294 billion in cargo in 2021.)

Even considering the emissions surge of 2021, air pollution from the port complex is still significantly below historical levels. Major categories of emissions — diesel particulate, nitrogen oxides and sulfur oxides — declined sharply between 2005 and 2010, as ships switched to fuels with lower sulfur concentrations and older ships were replaced with more efficient vessel engines.

The ports have also sought to reduce their pollution and greenhouse gas emissions by transitioning to zero-emission cargo-handling equipment by 2030 and heavy-duty trucks by 2035.

But that transition has proved more challenging than officials anticipated.

An initial bid seeking trucks capable of running a minimum of 25 miles without emissions generated a lackluster response, Seroka said. The Port of L.A., which has more than 20,000 registered trucks, received commitments for only 42 zero-emission trucks, he said.

“These truckers, on average, pay $50,000 for their truck,” Seroka said. “It’s usually bought on the second- or third-hand market. A near-zero truck today costs $225,000. A zero-emission, battery-electric truck costs between $350,000 and $450,000, and the early prototypes of the hydrogen fuel cell truck are probably double that. How are you going to get this family business to go from a $50,000 rig to a half-a-million-dollar investment per truck?”

The California Air Resources Board, the state agency responsible for regulating mobile sources of pollution, including cars and trucks, is weighing a proposal that would require truck manufacturers to sell an increasing number of zero-emission trucks in California from 2024 to 2035.

Although state and port officials say they still hope to meet such deadlines, some public health experts worry about the immediate consequences for area children — who are among the most vulnerable to pollution.

“Thinking about what’s going to happen 10 or 20 years from now is great,” Avol said. “It’s good for us to be thinking about that. But, in the interim, we are literally signing away the health of the current generation of kids because they will be growing up with the air that’s here now.”