A three-truck platoon ran on Interstate 110 using technology developed by the University of California at Berkeley’s Partners for Advanced Transportation Technology attached to a Volvo truck. The platoon used forward looking sensors and vehicle-to-vehicle communication to maintain speed and spacing, the California Department of Transportation said.

“Once again California is leading the nation in advanced technology,” said Caltrans Director Malcolm Dougherty. “Today we saw a demonstration of a truck technology that promises to improve California’s existing freight system by enhancing truck safety and increasing capacity on existing highways.”

The three Class 8 rigs drove 50 feet apart at speeds of 55 miles per hour while hauling cargo containers that are omnipresent in Los Angeles County. By design, cars cut into the platoon to simulate real-world traffic. 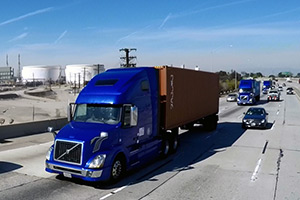 Officials from the Federal Highway Administration and the California Highway Patrol also took part in the demonstration, as did an executive with Cambridge Systematics, which worked on the platooning technology.

RELATED: Robots could replace 1.7 million American truckers in the next decade

“California faces some of the worst traffic congestion in the nation, a contributing factor in the state’s air quality problems. The Volvo Group is committed to developing advanced technology solutions, such as platooning, which can provide sustainable economic, environmental and safety benefits for truck fleets and the communities where they operate.”

“Our technology planning and traffic simulation work suggests connected vehicle and truck platooning technologies may eventually facilitate the ability to operate up to 50% more trucks on these lanes — essentially giving the capacity equivalent of a third lane of freeway in each direction,” said Mark Jensen of Cambridge Systematics.