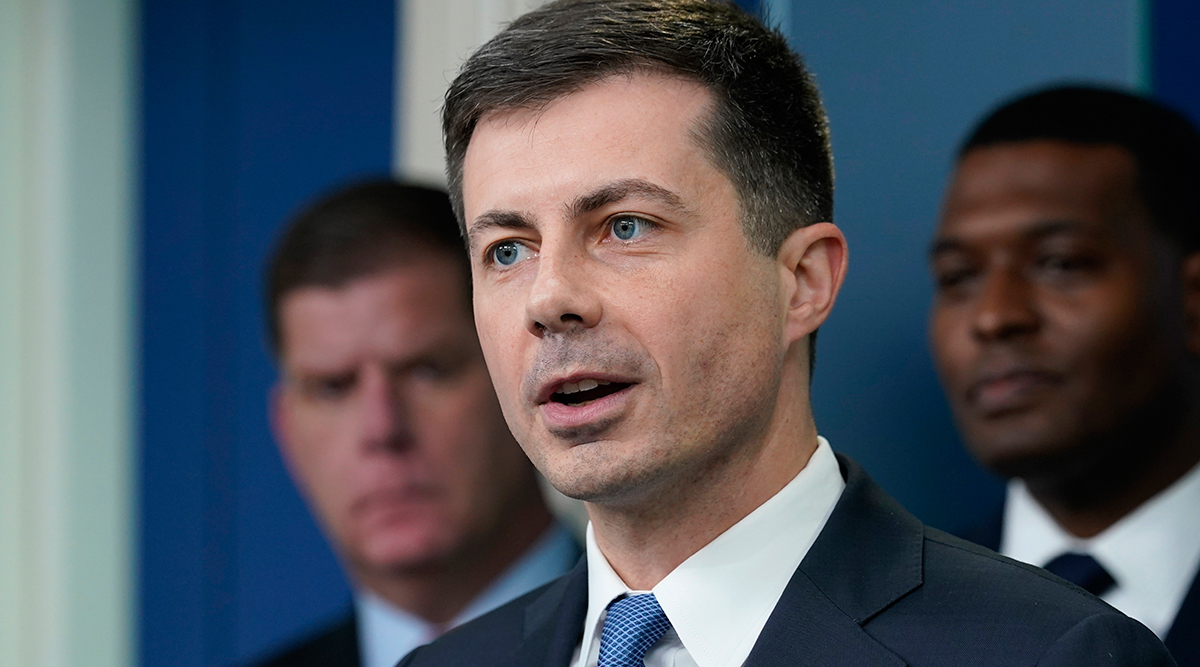 Motorists taking advantage of electric vehicle tax breaks contained in a $739 billion Senate bill introduced this week will be well-served by existing and planned infrastructure in the West, Transportation Secretary Pete Buttigieg said in Coeur d’Alene, Idaho, on July 29.

“Making electric more affordable for everybody is a priority, along with what we’re already partnering with states on, which is making it easier to charge,” the Navy Reserve veteran and former Democratic presidential candidate told six governors of the Western states.

Buttigieg said “there’s a lot to be excited about” in the package, called the Inflation Reduction Act of 2022, which was unveiled July 27 as part of a sweeping presentation on American infrastructure delivered on the final day of the Western Governors Association annual meeting. The transportation secretary, the fourth Cabinet member of the Biden administration to address the group this week, touted the future of electric vehicles, autonomous transportation and the infrastructure improvements that could be made with the previous, $1.2 trillion infrastructure law passed by Congress last year.

Buttigieg said the West was uniquely positioned to serve as a proving ground for these investments, particularly electric vehicles.

Glad to meet with the Western Governors on plans to modernize transportation infrastructure to lower costs, fight climate change, and build resiliency against wildfires, floods and other risks they face. pic.twitter.com/KO94OmYxuh — Secretary Pete Buttigieg (@SecretaryPete) July 28, 2022

“I think you have a chance in the West to challenge some expectations about where innovation happens because so much of it is happening in your states,” Buttigieg said. He specifically mentioned ChargeWest, an agreement among Montana, Idaho, Wyoming, Nevada, Utah, Colorado, Arizona and New Mexico to increase rural charging stations for electric vehicles.

The Senate bill includes a $7,500 incentive for the purchase of new electric vehicles and $4,000 for used cars, Buttigieg said. That should lower the financial burden for drivers to adopt electric vehicles, a burden that Buttigieg acknowledged had created a stigma around ownership of an electric car.

“They are thought of as something for well-off people in dense urban centers who are sipping their lattes on the way to get sushi,” Buttigieg said, to laughter from the assembled audience. “But you know, the longer your distances that you drive every day, the more this is going to matter to you.”

In an interview after the speech, Buttigieg said making electric vehicles more affordable would get more drivers pulling their transportation energy needs from the power grid, which is already being pushed toward cleaner sources by state, local and federal laws.

“Even if most of your electricity comes from fossil, an EV burns cleaner than a gas car,” Buttigieg said. “But it gets cleaner and cleaner, the more you have renewable energy. So if this helps us get us get sustainable, homegrown, green energy more and more into our grid, that’s a double win.”

Assembled governors questioned Buttigieg on the timetable for spending their share of the federal funds for infrastructure, citing the need for environmental permit review for projects as unnecessarily delaying that spending. Idaho Gov. Brad Little asked Buttigieg if that delay would continue to drive inflation upward, citing as an example delays on digging trenches to help run broadband internet lines across the Gem State.

“I’m certain, as we get closer — my cities, counties, highway districts, transportation departments, schools — all of them are going to say, I can’t efficaciously and wisely spend this money,” Little said. “I can’t think of anything more inflationary than a lot of government dollars chasing too few people.”

Buttigieg said he understood the concern and that it behooved governments to work quickly to spend their money in order to avoid inflationary costs, but that environmental reviews were also important.

“We want to be as user-friendly as we can be within the parameters of the law,” Buttigieg said.

Republican Gov. Doug Burgum of North Dakota asked Buttigieg about increasing the pool of trucking employees who’ve received their commercial driver licenses and the administration’s position on permitting autonomous vehicles for freight shipments by road. Buttigieg said in much the same way the country will need to experience “a cultural shift” around electric vehicles, the public needed to change its thinking on self-driving cars.

“Some of it is technology,” Buttigieg said about the reticence to push for more autonomous vehicles. “But some of it is our readiness to work with the technology.”

That could be driven by the public’s increased scrutiny of crashes involving self-driving cars, as opposed to the large number of traffic injuries and deaths occurring every year in traditional vehicles, the secretary said.

“We’re so used to it, that there is more fear around a handful of incidents happening in the autonomous environment, than around the around 100 to 150 lives we lose every single day in the status quo,” Buttigieg said. The National Highway Traffic Safety Administration reported 42,915 deaths in motor vehicle crashes in 2021, the most recent year for which data was available, averaging out to 117 per day. That was the highest number of deaths in 16 years.

Buttigieg said after the meeting with governors he appreciated their concern about environmental review and would take those comments back to Washington, D.C.

“The truth is that most funding that comes from my department will go to a state for day-to-day decisions, where to put it,” Buttigieg said. “So, the partnership with governors, with state departments of transportation, is central to our work. If they don’t feel like something is working for them, I need to know.”