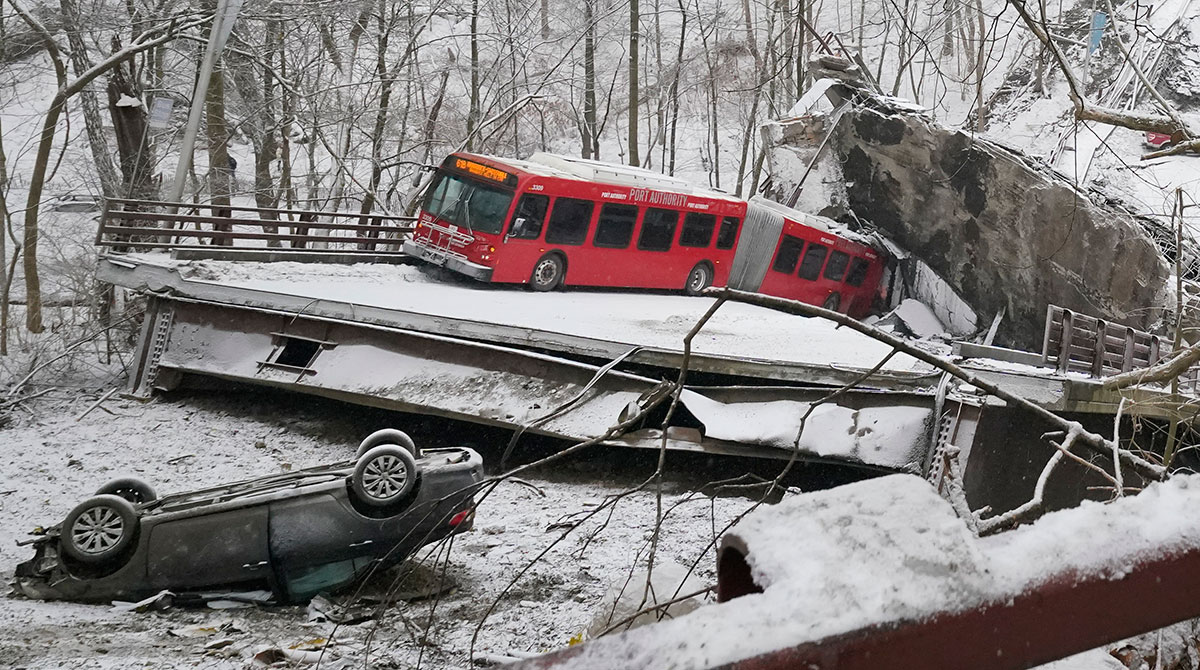 A Port Authority bus and a car were on a bridge when it collapsed. (Gene J. Puskar/AP)

PITTSBURGH — A 50-year-old bridge collapsed in Pittsburgh early Jan. 28, requiring rescuers to rappel nearly 150 feet and form a human chain to reach occupants of a bus that had plummeted with the span into a park ravine.

The collapse came hours before President Joe Biden visited the city to promote his $1 trillion infrastructure law, which has earmarked about $1.6 billion for Pennsylvania bridge maintenance.

There were minor injuries from the collapse but no fatalities, said authorities, who also flew drones to make sure no one was under any collapsed sections. Five other vehicles were also on the bridge at the time. The cause was being investigated and crews were searching under the debris for additional victims.

City officials said the Forbes Avenue Bridge over Fern Hollow Creek in Frick Park came down at 6:39 a.m. ET. Witnesses said the loud noise from the collapse was followed by a hissing sound and the smell of natural gas. 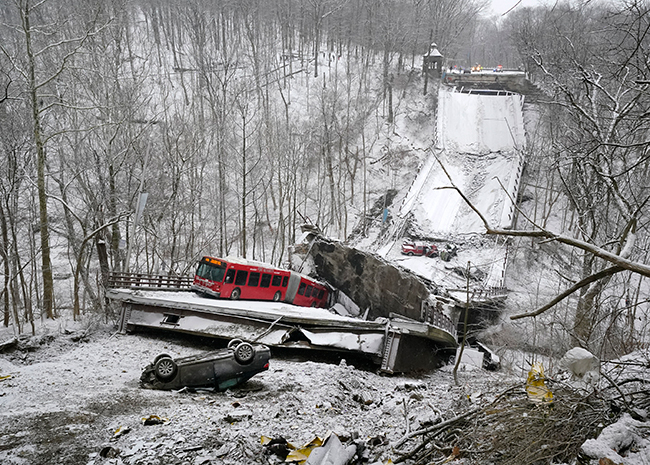 “The first sound was much more intense, and kind of a rumbling, which I guess was the structure, the deck hitting the ground,” said Ken Doyno, a resident who lives four houses away. “I mean, the whole house rattled at that point.”

Ruptured gas lines along the bridge produced the leak and the supply of gas was shut off within a half hour, city officials said.

A spokesperson for the National Transportation Safety Board, an independent government agency that investigates transportation problems, said Jan. 28 the agency was sending a team of about 10 people to investigate “not only what happened but why it happened.”

Sam Wasserman, a spokesman for Pittsburgh Mayor Ed Gainey, said a few hours after the collapse that officials were evaluating the scene and an urban search-and-rescue team was still combing the area for any other possible victims.

Every school day Melissa takes her daughter across the Pittsburgh bridge that collapsed this morning. Today there was a delay due to snow. Behind her, a Port Authority bus balances nose down in the wreckage. This hours ahead of Biden’s visit to the city to discuss infrastructure. pic.twitter.com/2uJsVjnF9u — Stephanie Strasburg (@StephStrasburg) January 28, 2022

He said most of the 10 people who were evaluated for injuries were first responders checked for exhaustion or because of the cold and snowy weather. Three people were taken to hospitals and none had critical injuries, Wasserman said.

The scene was reminiscent of the aftermath of an earthquake, with a large crack on the end of the bridge where the bus landed. There was also a car upside down in front of the bus.

A two-part, elongated Port Authority of Allegheny County bus was on the bridge when it collapsed, with two passengers aboard in addition to the driver, said Adam Brandolph, spokesperson for the transit agency. All three were taken off safely.

About two hours after the collapse, Brandolph said, one of the passengers was on another bus when the passenger began complaining of injuries and was taken to a hospital. The driver and other passenger were not hurt, according to Brandolph. 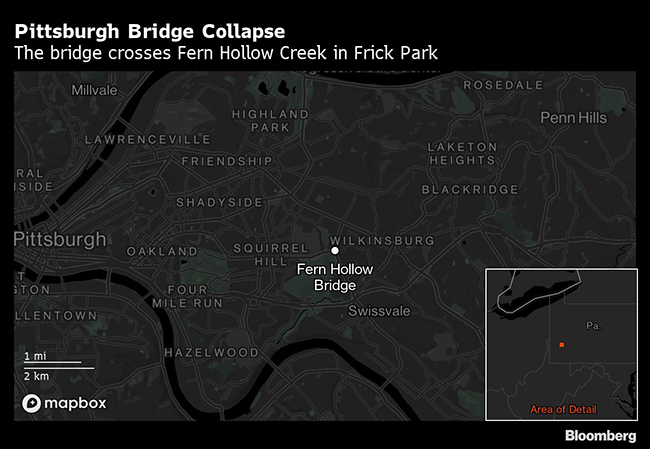 The bus had started its route in downtown Pittsburgh and was headed to the suburban community of Braddock.

“Judging by the time of day, had this bus been traveling inbound, toward downtown, there likely would have been more people on the bus and obviously could have been a much, much more dire situation,” Brandolph said.

The bus had seven or eight cameras and any footage they captured of the collapse will be part of the investigation.

“We have not yet been able to review that footage but we certainly hope to very soon,” Brandolph said.

Neighbors said a gas company worker went door-to-door to get them to evacuate from the immediate vicinity before the gas was successfully shut off. 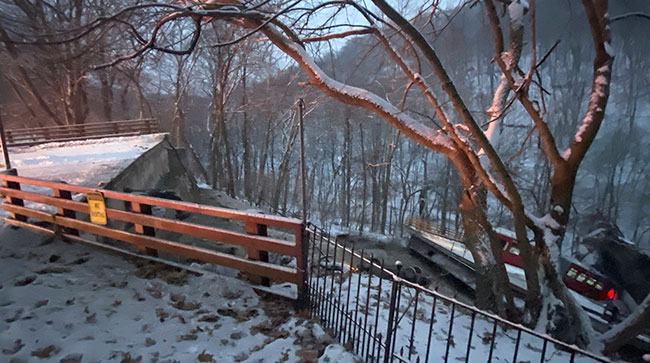 A commuter bus sits upright on a section of a collapsed bridge in Pittsburgh.  (Greg Barnhisel via AP)

“Apart from just this abiding noise, we could begin to smell gas and that was the truly frightening thing, then with that smell we both said, let’s get dressed and get out of here,” said Lyn Krynski, whose home is nearest the bridge.

“It sounded like a weather phenomenon more than anything,” said Douglas Gwilym, who was shoveling about an inch of snow when he heard the noise. “It was all I had to compare it to — it was this odd, whooshing sound.”

At the site of the collapse, Pennsylvania Lt. Gov. John Fetterman called it “just an awful, surreal scene.”

“I hope it’s a wake-up call to the nation that we need to make these infrastructure investments,” Fetterman said.

The bridge is an important artery that leads to the Squirrel Hill and Oakland neighborhoods, and a popular route toward downtown Pittsburgh. Authorities told motorists to avoid the area. Several neighbors said a weather-prompted two-hour school delay may have prevented a far worse human tragedy.

During his visit to the city, Biden stopped at the scene of the bridge collapse. He shook hands with law enforcement at a command post and looked over a barrier to examine the damage.

“The idea that we’ve been so far behind on infrastructure for so many years, it’s mind-boggling,” the president said.

Wasserman said the most recent inspection occurred in September but the report was not immediately available.