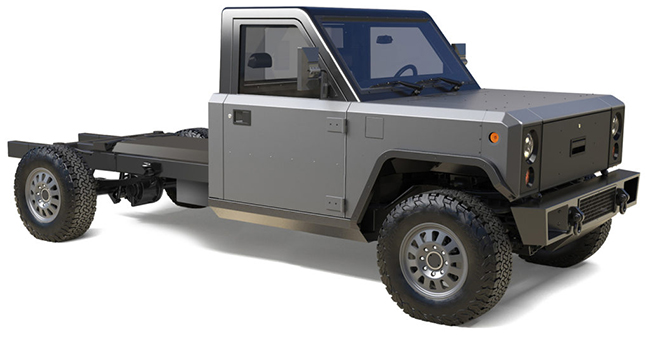 Bollinger Motors Inc. said Aug. 25 it will sell Class 4 and Class 5 electric commercial trucks in addition to the Class 3 vehicles it unveiled last year in a move the Oak Park, Mich.-based startup said would offer greater coverage to customers.

Bollinger’s $125,000 B1 SUV and B2 pickup are among the anticipated crop of forthcoming consumer electric vehicles. But the startup has turned to the high-volume work truck market to sustain its operation that initially was largely self-funded by CEO Robert Bollinger with a fortune earned in the cosmetics industry.

“We’ve been working on these vehicles with the intention of a commercial application,” Bollinger told The Detroit News. “We’ve been going down that path with an all-new frame and chassis.” 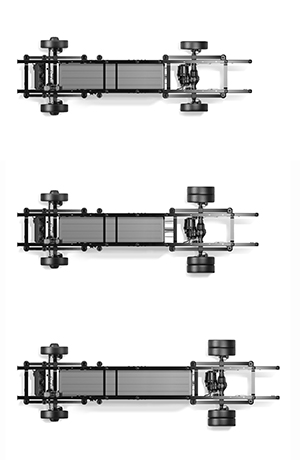 Classes 4 and 5 go bigger: The B2 Chass-E-4 and Chass-E-5 have weight ratings of 16,000 and 19,500 pounds, respectively. The electric skateboards can power last-mile delivery vans, chassis cabs, freight or bucket trucks and airport tugs. Pricing still is being finalized, though the vehicles are meant to be cost effective, efficient and offer long-life durability, Bollinger said.

He hopes to start building prototypes soon. Production could begin in 2023 with the manufacturer that also will build its retail vehicles. That partner could be announced next month. Progress has been delayed due to the COVID-19 pandemic, Bollinger said.

“There’s a lot of really valuable work that we have done there in Class 3 that can be used beyond Class 3,” Bollinger said.

Speaking with potential customers that Bollinger hopes to announce in the near future, the company heard about how businesses may use Class 3 trucks to deliver to people’s homes or businesses but use the larger vehicles to transport between their own facilities.

“They don’t always have their fleets in one class,” Bollinger said. “It was a way to offer a lot of customers a few more choices.”

The suppliers Bollinger already was working with have the production capacity and motors with the capability to make the jump, he said. Bollinger itself expects to double its more than 50-person workforce by the end of the year.

But startups have faced their fair share of obstacles. Rivian in July delayed the start of deliveries of its R1T pickup and R1S SUV until September, citing challenges with equipment installation and facility construction in Normal, Ill., and shortages of parts such as semiconductors. It still expects to begin producing Amazon.com Inc. vans this year.

Lordstown also has said it intends to launch production in September, after previously warning it may not have the funds to continue in business. It lost its CEO and chief financial officer this summer following a scathing report from a short-sell investor that had targeted Nikola a year prior.

Bollinger hopes the semiconductor scarcity that has shut down auto plants around the world since the start of the year will be over by the time the company launches production.

That makes going public through a special-purpose acquisition company, as many EV startups have, attractive in order to get an influx of cash, he said. But that comes with greater transparency at a time when many of these companies, including the privately owned Bollinger, still have a lot of development work to do.

“We are trying to not put the cart in front of the horse,” he said. “We are getting financing and funding. When it’s the right time to announce things, we announce them.”