Advances in information technology have boosted the efficiency of trucking operations in countless ways during the past few decades. Trucks and trailers, once invisible to fleet managers, are now tracked via telematics systems. Increasingly, paperwork associated with tasks such as recording drivers’ hours of service and processing vehicle inspection reports has moved to electronic systems. 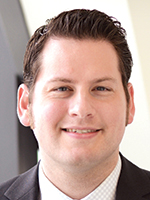 Meanwhile, fleet management has improved by leaps and bounds through the use of data analytics, which is enabling companies to make better business decisions based on factors such as lane profitability and driver and vehicle performance.

When a vehicle component begins to fail, modern trucks send proactive information to the fleet and can even alert the dealer before the truck arrives for repairs.

All of these improvements have made the movement of freight easier and more efficient.

The next stage of this evolution could very well be blockchain, a shared digital ledger that could increase the speed and accuracy of many kinds of transactions.

Blockchain originally was developed to support the cryptocurrency Bitcoin, but now technology experts are exploring other ways to apply the concept across a variety of industries.

This broad applicability has helped make blockchain one of the hottest topics in the technology world, following in the footsteps of other much-discussed trends such as the internet of things, cloud computing and big data.

So what’s all the fuss about?

In short, blockchain could significantly reduce the friction of doing business.

Blockchain’s collective bookkeeping system can eliminate the need for a third party to verify transactions, which could decrease costs and enable much faster payment processing.

All parties share an identical, updated version of the ledger, and the system only posts a transaction when the parties agree that it is valid, thus preventing fraud and errors such as double charging.

Technology experts believe that blockchain, through this decentralized process, could redefine trust in the business world. Rather than trusting only people and organizations, businesses could instead place their trust in the system itself, confident that the transactions are verified.

Within the transportation industry, blockchain could serve as a new architecture for a host of functions.

Companies might also use blockchain to document compliance with food transportation requirements under the Food Safety Modernization Act.

In the future, shippers and carriers might place and accept bids on load boards built on blockchain networks.

Blockchain could enable carriers and shippers to use “smart contracts” to track each party’s obligations throughout the course of the agreement, from the initial bid to final payment. Perhaps these contracts could include built-in factors such as on-time delivery and driver detention time. When the load is delivered, the smart contract could automatically create an invoice and process payment immediately, rather than weeks later.

But for blockchain to take hold in the transportation business, the industry will need to develop standards for the technology. That’s one of the goals adopted by the Blockchain in Transport Alliance, a growing consortium of fleets, trucking technology suppliers and other industry stakeholders.

While blockchain is still in its infancy in trucking, transportation providers can expect to hear much more about it in the years to come. Now is a great time for industry executives to start thinking about how they might incorporate blockchain into their operations.