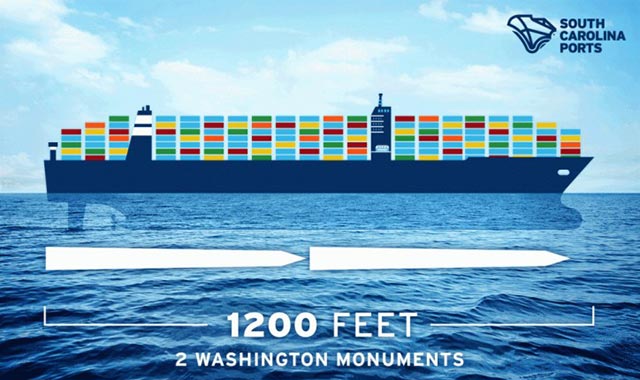 The Panama Canal truly entered the big-ship era the week of May 8 when the largest vessel to date — a vessel from Asia that is as long as the Eiffel Tower is high and 158 feet wide — transited the expanded canal en route to the United States.

During the week beginning May 15, the 1,200-foot-long COSCO Development, which came from China, will become the biggest ship ever to call on U.S. East Coast ports. It falls into the category dubbed “Neopanamax” — ships too long, too wide and too heavy to fit through the locks of the original Panama Canal before the recent addition of new locks and entry channels.

But the containership won’t be coming to the Port of Miami, which has spent some $1.3 billion to deepen its shipping channels and make other improvements so it can efficiently handle Neopanamax ships.

With a capacity of 13,092 TEUs, or 20-foot equivalent container units, the COSCO Development can carry far more cargo than a ship transiting the original canal, which can only handle 5,000-TEU vessels that are no more than 965 feet long and 106 feet wide.

Even though this record-setter will be bypassing PortMiami, Port Director Juan Kuryla said May 4 that Miami expects to be getting ships of similar size later this year. A project to raise the road bed of New Jersey’s Bayonne Bridge, allowing 13,000-14,000 TEU ships to reach terminals in the Port of New York and New Jersey, is expected to be completed by June 30. When it’s done, Kuryla said Miami has been told it will be a stop on the rotation of those huge northbound ships.

The COSCO Development is part of the new OCEAN Alliance’s weekly South Atlantic Express service that connects Asia to U.S. East Coast ports via the canal. The Alliance, which includes China COSCO Shipping, Orient Overseas Container Lines, CMA CGM Group and Evergreen, has 11 vessels at its service. All are too large to fit through the canal’s original locks, which were inaugurated in 1914.

Kuryla said that while PortMiami is not part of the South Atlantic Express service, it will be getting OCEAN Alliance vessels because CMA CGM, the largest line in the alliance, owns a terminal at the Miami port.

The COSCO ship passed through the canal on May 2. “Today’s milestone transit ushers in a new era of mega-ships transiting the expanded canal,” Panama Canal Administrator Jorge Quijano said. “This is yet another example of the expansion surpassing our original expectations. Less than one year in, and the impact of the expanded canal is already evident across the world.”

The Disney Wonder was the first cruise ship to transit the expanded Panama Canal.

More than 1,200 Neopanamax ships have used the new locks since they opened last June, and the week of May 8 the first cruise ship — Disney Cruise Line’s Disney Wonder — transited the canal expansion. The 2,713-passenger ship was en route from Port Canaveral to San Diego on a 14-night voyage.

PortMiami dredged its shipping channel to a depth of 50 to 52 feet so it would be able to accommodate Neopanamax vessels. The first vessel in that category, the 6,724-TEU MOL Majesty, arrived in Miami on July 9 to much fanfare. Before the dredge, only ships that drafted 39.5 feet or less could get into the port.

Since the Miami dredge was completed in October 2015, PortMiami has seen 113 vessels that wouldn’t have been able to make it into port at the previous depth. And since July 9, 65 Neopanamax ships have visited.

Cargo volume on trans-Atlantic and routes from Asia, which tend to use bigger ships, is up 7% to 8% so far this fiscal year, said Kuryla, while trade with Latin America is down. That means cargo volume will probably be flat this fiscal year, Kuryla said, but he still expects it to exceed 1 million TEUs for the third year in a row.

Currently only four East Coast ports — Norfolk, Va., Baltimore, New York/New Jersey and Miami — have water deep enough to handle Neopanamax vessels, but others have plans to dredge. In the past, mega-ships from Europe or Asian ships that have transited the Suez Canal have called on some ports that aren’t big-ship ready, but they haven’t been fully loaded.

Savannah, Ga., already has embarked on a deepening project that could be completed as early as 2020, and Charleston, S.C, is expected to begin dredging its channels to a depth of 52 to 54 feet this year. In Florida, Port Everglades also has designs on deep water. It hopes to complete deepening its main navigational channel and deepening and widening its entrance channel between 2021 and 2024.

Congrats to our friends at @thepanamacanal on the passage of the @COSCOSHPGLines Development! Track the vessel: https://t.co/4WnxsNjdV2 pic.twitter.com/PGS0DxCoMD — South Carolina Ports (@SCPorts) May 2, 2017