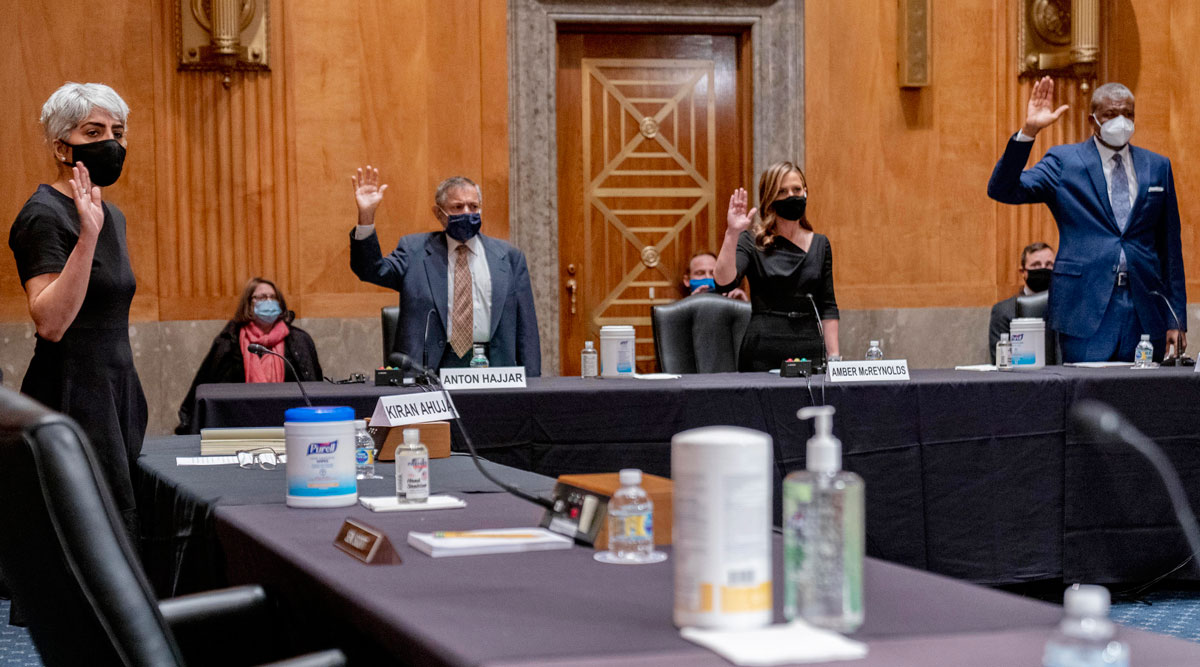 Standing from left, Kiran Ahuja, nominee to be Office of Personnel Management Director, and the nominees for Postal Service Governors Anton Hajjar, Amber McReynolds, and Ronald Stroman, are sworn in on April 22. (Andrew Harnik/Associated Press)

President Joe Biden’s nominees to the governing board of the U.S. Postal Service pledged April 22 to rebuild trust with the American public through prompt deliveries, as they outlined a vison for the agency in their first formal statements to lawmakers.

The nominees — Ron Stroman, a former deputy postmaster general; Amber McReynolds, who leads the nonprofit National Vote at Home Institute; and Anton Hajjar, the former general counsel of the American Postal Workers Union — made the remarks during their confirmation hearing before the Senate Homeland Security and Governmental Affairs Committee. The panel did not immediately vote on the nominations.

The hearing marked the first step in a process that could reshape the board as Postmaster General Louis DeJoy, a former executive with XPO Logistics, pursues a controversial overhaul of mail operations following outrage last year over delivery slowdowns. If approved by the committee and then the full Senate, the nominees would give Democrats and Democratic appointees a majority on the board.

The hearing was relatively tame compared to the combative spats that have characterized DeJoy’s appearances on Capitol Hill since he took over the agency last year and since weathered several calls to step down. Under questioning, all three nominees said they have not faced any outside pressure to oust DeJoy, a major GOP donor, and instead focused on their plans to improve service and agency infrastructure.

The nominations came after DeJoy and the board Chairman Ron Bloom, a Democrat, debuted a sweeping, 10-year strategic plan meant to stem a projected $160 billion loss at the agency over the next decade.

Among other things, the plan would relax the current first-class letter delivery standard of one-to-three-days to a one-to-five-day benchmark for mail going to the farthest reaches of the postal network. Officials have said 70% of mail would still be delivered within a three-day standard. The plan also includes a proposal to consolidate underused post offices, and hints at a potential postage rate increase as well as investments in a new fleet of delivery vehicles.

The agency is seeking advisory opinions from the independent Postal Regulatory Commission on potential changes to delivery standards as well as other initiatives in the plan.

Democrats have had DeJoy in their crosshairs since he took over the Postal Service, and have ramped up their criticism after he detailed his long-term strategy for the agency.

A wealthy logistics executive, DeJoy was accused of trying to sabotage the agency when he implemented a series of policy changes that slowed mail deliveries before the 2020 Election. He has strongly disputed that claim though he eventually suspended some of his initiatives following intense public pushback and a raft of legal challenges. Despite the concerns, more than 99% of ballots were delivered to election officials within five days during the general election, according to the Postal Service.

DeJoy was again drawn into the spotlight during the holiday season as delivery times plummeted across the nation, renewing calls for him to step down. Service has shown signs of rebounding since the holiday dip, with national on-time rates improving to 87% in the beginning of April, according to postal delivery data.

During the hearing, the nominees stressed the need to establish a clear plan to improve delivery service as lawmakers pressed them on delays.

“The universal service obligation of the Postal Service requires delivering prompt, reliable and efficient service to all Americans, all over the country,” said Stroman. “And it starts, it seems to me, with having a plan to ensure that you have great service.”