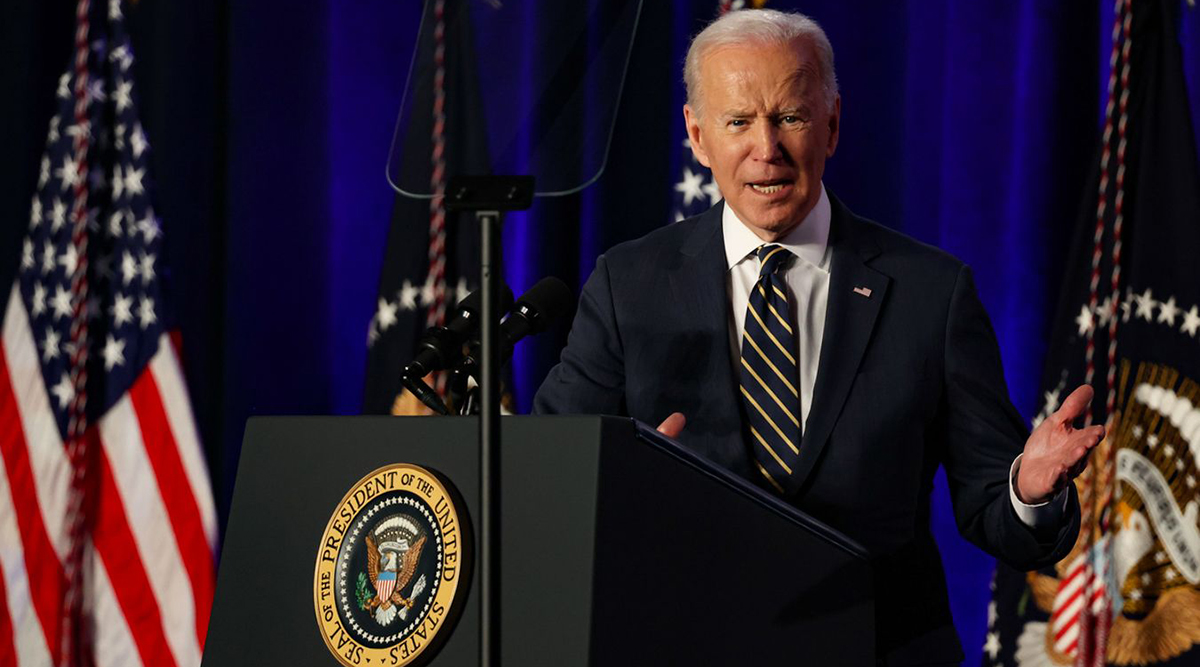 President Joe Biden has urged U.S. oil companies to step up production, but they are wary given his historic hostility toward fossil fuels (Hannah Beier/Bloomberg News)

The war in Ukraine has touched off a feud between the White House and U.S. oil industry as many companies reap record profits from rising prices despite pumping less crude than before the pandemic, leaving American consumers beset by surging gasoline costs.

President Joe Biden has urged U.S. oil companies to step up production — but they are wary given his historic hostility toward fossil fuels and the risk that new drilling won’t pay off over the long term.

The political dangers are stacking up for an administration set to lose ground in midterm elections in November with record-high inflation stinging voters even before Russia’s invasion of Ukraine.

For now, polls show most Americans support the U.S. ban on Russian crude even if it means higher prices at the pump. Biden has pinned the surge directly on Vladimir Putin. This is “Putin’s price hike,” he said.

“His logic of where to point the blame is probably justifiable and politically smart,” said Charles Franklin, director of the Marquette Law School Poll. “But does it make people ignore the fact that it’s costing them an extra 12 or 15 bucks to fill up the average car? I don’t think it makes those economic concerns to households go away.” 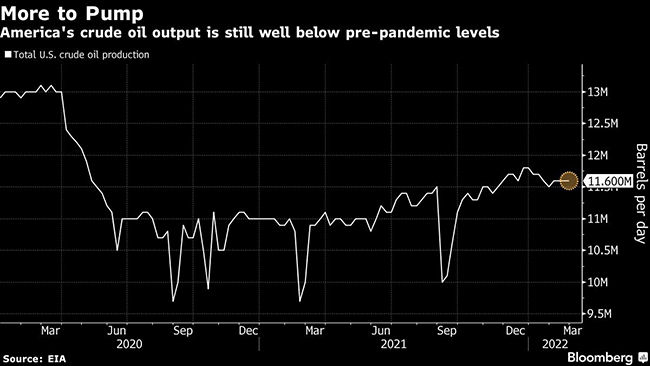 The Biden administration finds itself in the uncomfortable position of pleading with oil companies to boost crude production, despite its long-term goal of shifting the U.S. away from the fossil fuels that worsen climate change.

“We are on a war footing,” Energy Secretary Jennifer Granholm told oil executives at the CERAWeek by S&P Global conference March 9. “We need oil and gas production to rise.” 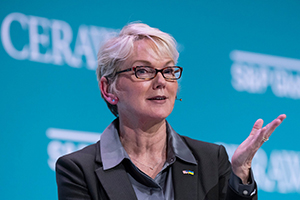 But it’s not as simple as oil companies turning on a spigot. These businesses make drilling plans based on economic forecasts for at least a year out, when OPEC+ may have boosted output and prices may have long since peaked.

That leaves Biden in a political bind. Republicans are confident that inflation and gas prices will help deliver them control of Congress despite White House attempts to steer voters’ anger elsewhere.

“Biden’s attempt to deflect blame is an insult to every American and small business owner struggling to afford the cost of everyday goods,” RNC Chairwoman Ronna McDaniel said March 10 in an emailed statement.

Franklin, the Marquette pollster, said inflation and gas prices are “made-to-order issues for the opposition party” because “people feel them and you can point blame at the president.”

The administration’s approach assumes oil producers will turn on a dime in response to pleas from the same people “telling everybody that they are going to be obsolete in 30 or 40 years,” said Benjamin Salisbury, director of research at Height Capital Markets.

Investors in shale also have brushed aside arguments that drillers should crank up production because it’s their patriotic duty. Many still bear scars from the last boom-and-bust cycle, when companies chased production growth, ultimately contributing to a glut that drives down prices.

“The upstream industry is not a public service industry,” said Ben Dell, founder of Kimmeridge Energy Management. “For 10 years we made no money. The industry is profitable for two months, and the argument is that we’re supposed to price down the product or give away margins to support the consumer.”

The Biden administration got a small piece of good news March 11 in industry data showing that shale explorers added the most rigs in a month. But the increase underscored that any improvement would be slow: The number of new, active rigs was just 8, pushing the U.S. total to 527.

It typically takes five to six months to drill and stimulate production at a Permian Basin well before oil and gas starts flowing, said Artem Abramov, head of shale research at Rystad Energy.

And that’s in the best of times. Right now, inflationary pressures have created headwinds for oil production too. Executives of both ConocoPhillips and Occidental Petroleum Corp. have cited the rising costs of piping, trucks and labor as obstacles to a ramp-up.

Three-quarters of America’s oil production and 86% of its gas production happens on private and state land — not U.S. government lands and waters.

Still, oil and gas companies held more than 9,000 approved-but-unused permits to drill in already-leased federal lands onshore as of Dec. 31, and the White House wants the industry to quickly put them to use.

Oil producers don’t “need an embroidered invitation to drill,” White House press secretary Jen Psaki said March 9. “There is a war. We’re asking them to go use the approved permits, use the unused space and go get more supply out of the ground in our own country.”

It is customary for companies to stockpile two-year permits to drill individual wells on federal land, in part to better stage complex operations. Even if they abandon operations at a site after finding it isn’t as productive as expected, existing permits aren’t forfeited.

Nearly 60% of leased federal acreage isn’t producing oil or gas, Psaki said. Yet a greater share of federal leases are producing oil and gas than any other time in the past two decades. Some 66% of onshore federal leases were churning out crude or gas in fiscal 2021, the most recent data available. 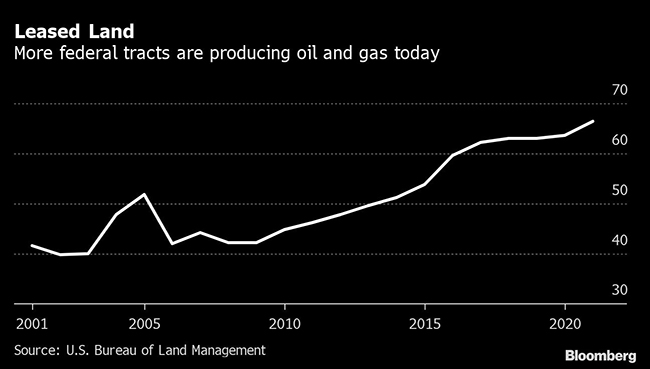 Overall U.S. crude production, which averaged 11.7 million barrels per day in January (up 100,000 bpd from the prior month) is on track to reach record-high levels next year, according to the U.S. Energy Information Administration.

“A combination of factors is driving a more disciplined approach to production — one that has made surging production complicated,” said Frank Macchiarola, senior vice president of policy for the American Petroleum Institute.

It’s not only Democrats who face risks from surging oil prices. Consumers could end up blaming oil companies, which might not bode well for the industry’s Republican allies.

—By Jennifer A. Dlouhy, Jordan Fabian and Kevin Crowley. With assistance from David Wethe and Steven T. Dennis.