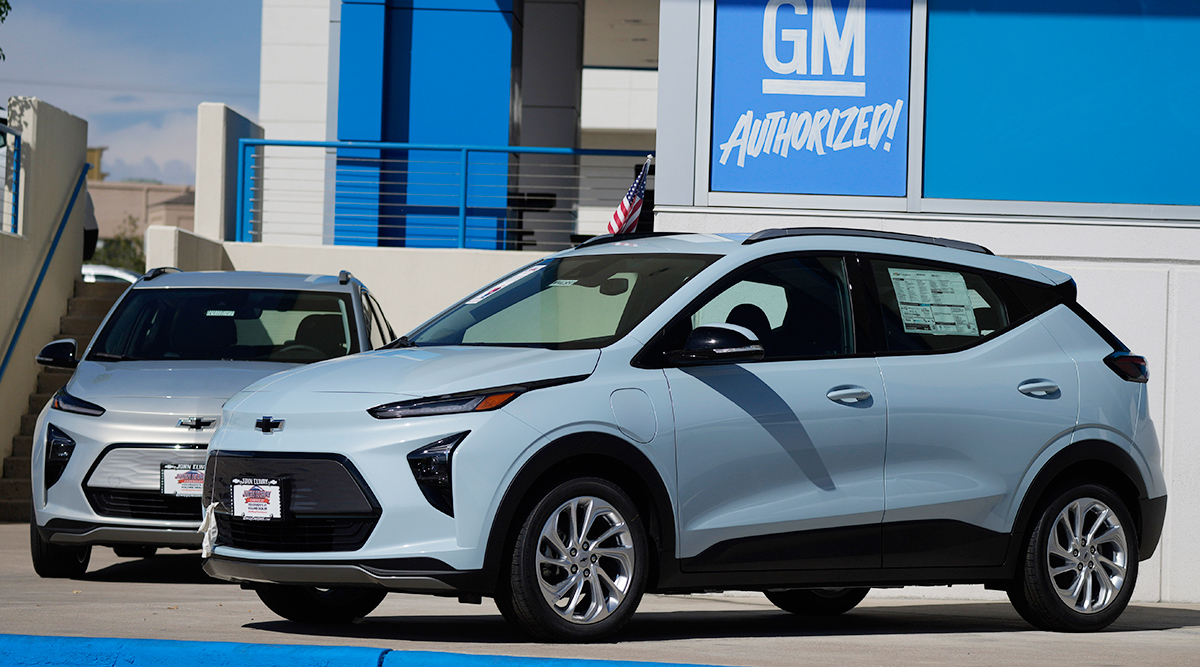 President Joe Biden wants electric vehicles to account for 50% of new car sales by 2030. But to meet that target he may have to sell the cars to a skeptical demographic: Donald Trump voters.

More than 76% of electric vehicle sales last year were in states Biden carried in the 2020 presidential election, according to data registration from IHS Markit and compiled by Bloomberg. 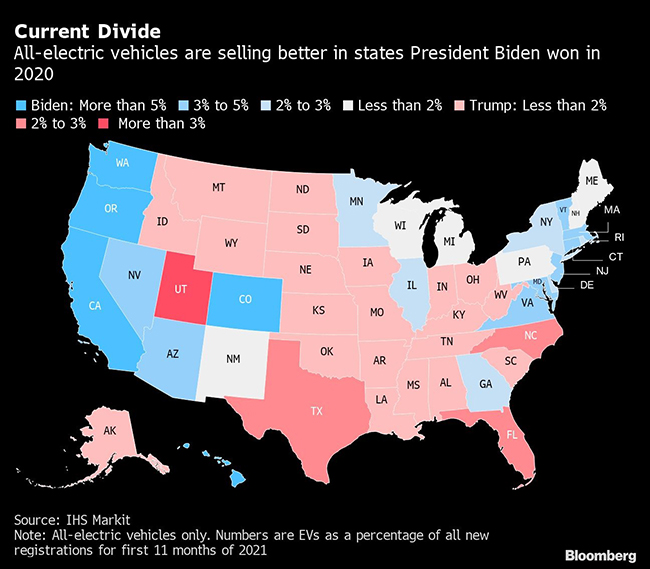 Transportation Secretary Pete Buttigieg says that EV sales in rural areas — where former president Trump is most popular — are a key part of the administration’s strategy to speed adoption and reduce emissions. The administration soon will roll out a rural electric vehicle strategy, he said.

“The Americans who stand to benefit most from EVs are those who drive the most, often rural drivers — so we’re working to increase charging availability across the country,” he tweeted last month. And rural areas tend to have more single-family homes where it’s easier to plug a vehicle in at night.

Teri Viswanath, an energy economist at rural cooperative bank Cobank ACB, has been skeptical of efforts to close the divide, but said Ford Motor Co.’s new F-150 Lightning — and a similar General Motors Co. model on the way — could be a “game-changer.”

It’s not just that the Ford F-series is the most popular model in the U.S., she said. With a battery 31% larger than the flagship Tesla Model S, the F-150 could also offer portable power for rural residents working away from the grid or who experience disproportionate number of power outages. Viswanath said the administration should focus not just on extending EV highway corridors, but also on the 80% of charging that happens in homes. 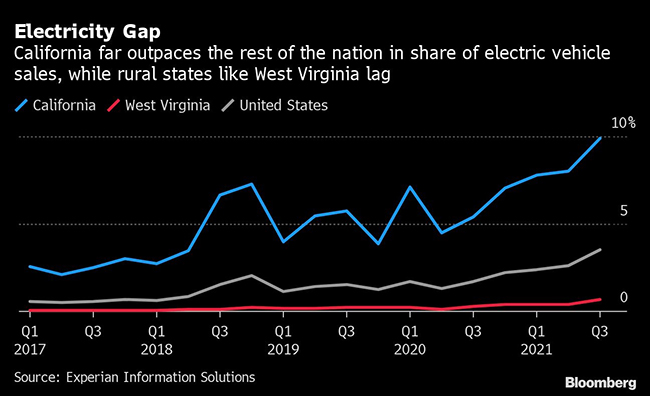 But charging infrastructure is just one side of the incentive equation. So, Biden is also pushing a $12,500 tax credit for new electric vehicles — an increase from the current credit of up to $7,500 — as part of his signature “Build Back Better” legislation.

That provision has met opposition from Sen. Joe Manchin (D-W.Va.), whose vote is essential in a Senate divided 50-50 between Democrats and Republicans. Manchin says the credit should be tailored to more inexpensive cars and favors an income cap on eligibility.

Manchin’s constituents aren’t buying EVs anyway: Just 0.5% of new cars registered in West Virginia in the first 11 months of 2021 were all-electric vehicles, according to IHS Markit. Only Mississippi and North Dakota had fewer.

“It doesn’t matter how good the charging is if no one wants to buy it anyway,” said Mike Fiske, an automotive powertrain forecaster at IHS Markit. “We’re going to have to see the right product at the right price with the right capabilities.”

State tax incentives can also make an impact. California offers a rebate up to $7,000 based on income requirements, often available at the point of sale. Other states with high EV sales also offer tax credits, rebates on home charging stations, waivers from periodic vehicle inspections and access to carpool vehicle lanes.