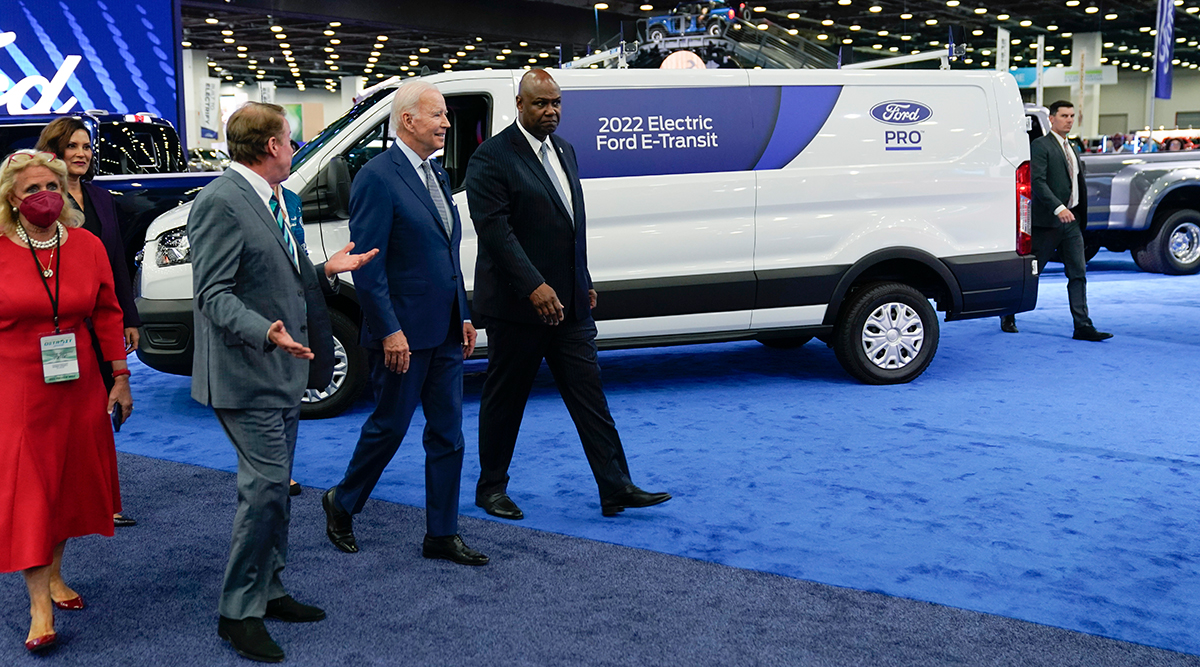 DETROIT — President Joe Biden, a gearhead with his own vintage Corvette, is showcasing his administration’s efforts to promote electric vehicles during a visit Sept. 14 to the Detroit auto show.

Biden, who owns a 1967 Stingray, hopped into the driver seat of a bright orange Chevrolet Corvette Z06 — not an EV — and fired up its engine, alongside GM CEO Mary Barra. 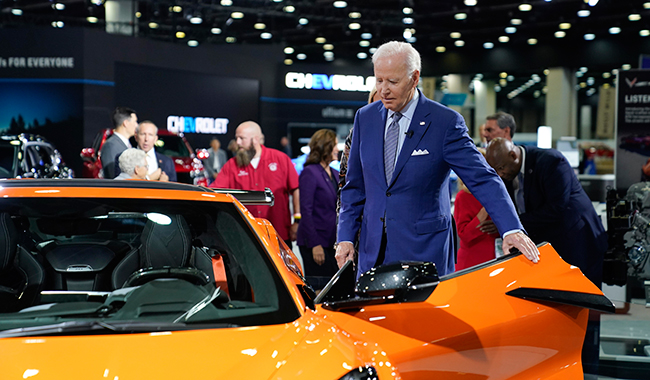 President Joe Biden gets into a Corvette during a tour of the auto show in Detroit. (Evan Vucci/Associated Press)

While Biden has been taking credit for the recent boom in electric vehicle battery and assembly plant announcements, most were in the works long before the Inflation Reduction Act was signed into law on Aug. 16. Biden’s 2021 infrastructure legislation could have something to do with it — it provides $5 billion over five years to help states create a network of EV charging stations.

In Detroit, Biden was to announce approval of the first $900 million in infrastructure money to build EV chargers across 53,000 miles of the national highway system in 35 states.

Under the law, electric vehicles must be built in North America to be eligible for a new federal tax credit of up to $7,500. Batteries for qualifying vehicles also must be made in North America, and there are requirements for battery minerals to be produced or recycled on the continent. The credits are aimed at creating a U.S. electric vehicle supply chain and ending dependence on other countries, mainly China.

Passage of the measure set off a scramble by automakers to speed up efforts to find North American-made batteries and battery minerals from the U.S., Canada or Mexico to make sure EVs are eligible for the credit. 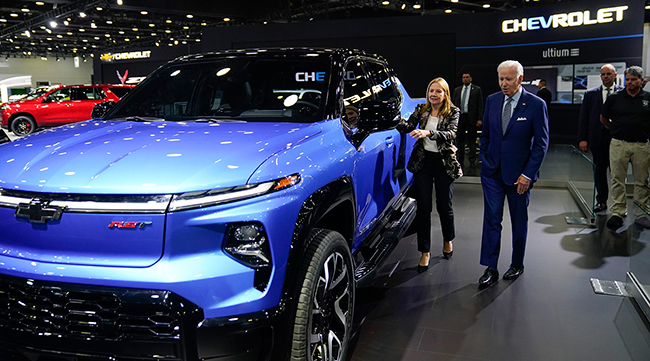 Long before legislators reached a compromise on the legislation, each company announced three EV battery factories, all joint ventures with battery makers. A GM battery plant in Warren, Ohio, has already started manufacturing. A government loan announced in July will help GM build its battery factories.

Ford said last September it would build the next generation of electric pickups at a plant in Tennessee, and GM has announced EV assembly plants in Lansing, Mich.; Spring Hill, Tenn.; and Orion Township, Mich. In May, Stellantis, formerly Fiat Chrysler, said it would build another joint venture battery factory in Indiana, and it has announced a battery plant in Canada.

Hyundai announced battery and assembly plants in May to be built in Georgia, and Vietnamese automaker VinFast announced factories in North Carolina in July. Honda and Toyota both announced U.S. battery plants after the act was passed, but they had been planned for months.

Biden has been talking for a long time about the importance of building a domestic EV supply chain, and that may have prodded some of the companies to locate factories in the U.S. But it’s also advantageous to build batteries near where EVs will be assembled because the batteries are heavy and costly to ship from overseas.

And auto companies are rolling out more affordable electric options despite battery costs. The latest came last week from General Motors, a Chevrolet Equinox small SUV. It has a starting price around $30,000 and a range-per-charge of 250 miles. Buyers can get a range of 300 miles if they pay more.

The Equinox checks the North American assembly box. It will be made in Mexico. The company won’t say where the battery will be made but it is working on meeting the other criteria for getting the tax credit.

The Democratic president, who recently took a spin in his pine-green 1967 Stingray with Jay Leno for a segment on CNBC’s “Jay Leno’s Garage,” may get the chance to slide behind the wheel of a new vehicle during his stop in Detroit. He doesn’t get many chances anymore in the driver’s seat; he’s not allowed to drive on public roads as president.