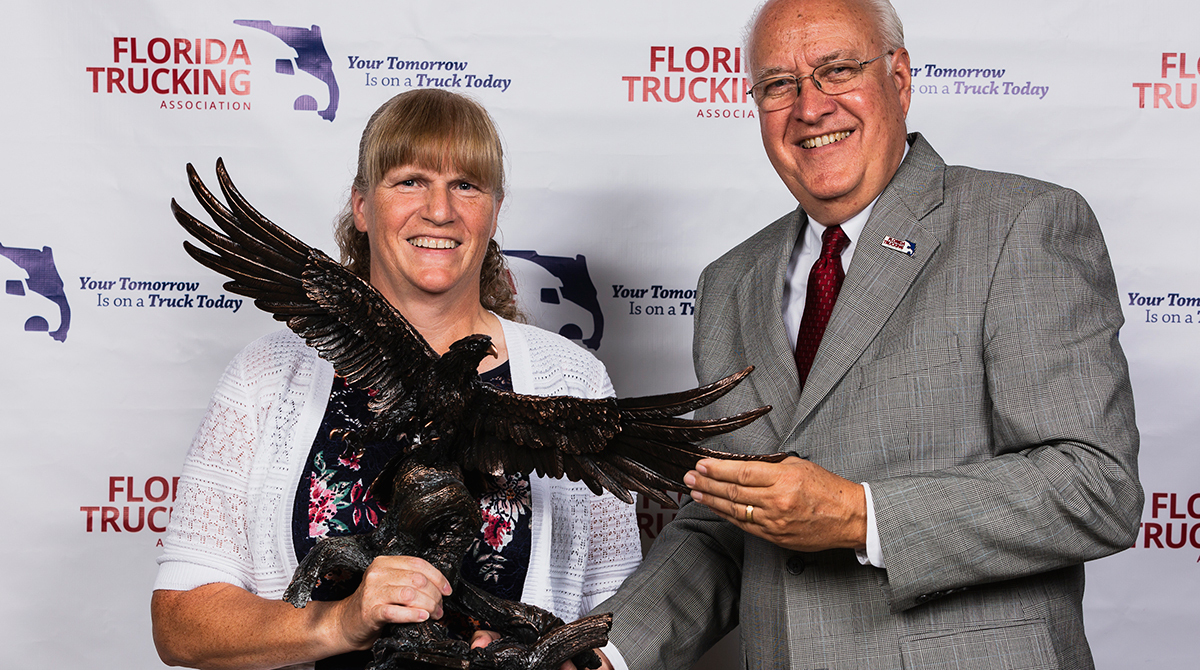 She earned a score of 319 in the Straight Truck competition and will be advancing to the National Truck Driving Championships in August.

Nelson, 53, is from Fairbanks, Alaska, where she competed in state championships several times and attended NTDC three times. Now, she’s gearing up for her fourth year at NTDC, this time as a Floridian.

Nelson moved to Florida about a year and half ago, and she said the competition is much steeper than it was in her home state.

“In Alaska, for the Step Van or the Straight Truck, if we had even 10 competitors, that was a pretty heavy year for that class,” Nelson said. “A lot of times, there were only four or five of us competing.”

However, fewer competitors meant greater opportunity for drivers to bond.

“When you’re in a small state, you get to know everyone so well that you almost feel bad when you beat them all,” she said. “I mean, you’re competing against some of your really good friends up there.”

Nelson knows this feeling well. In becoming Florida's Grand Champion, she surpassed her mentor and last year’s Grand Champion, Jottyn Santos. Although Santos did not claim the Grand Champion title, he won the 4-Axle division for the second year in a row, earning a spot at NTDC alongside Nelson.

Santos helped Nelson, a newcomer to Florida, prepare for the competition.

“He helped me find places to practice, and he was the biggest help for me this year,” Nelson said. “He’s awesome.”

Nelson got her start as a driver in Valdez, Alaska, when she was in college working for her parents' tour bus company.

“It was a lot of fun,” she said. “You meet a lot of people from all over the place.”

After graduation, she was hired at FedEx, where she has been working for more than 28 years.

Although she is a veteran competitor, Nelson still gets nervous before every competition, particularly for the driving course.

“You just know that if you’re off by a quarter of an inch, it can keep you from placing,” she said. “It’s nerve-wracking.”

Nelson is naturally competitive — that’s why she loves the Truck Driving Championships so much. However, she sees value in the event beyond just winning and losing. To qualify, drivers must remain accident-free for at least one year.

“As far as I’m concerned, I think we’re all champions as far as one year of safe driving,” she said.

She is thrilled to compete at NTDC in Pittsburgh and predicts she will continue to participate in the competitions for years to come.

“As long as I’m accident-free and healthy, I can’t see myself stopping until I retire,” Nelson said.