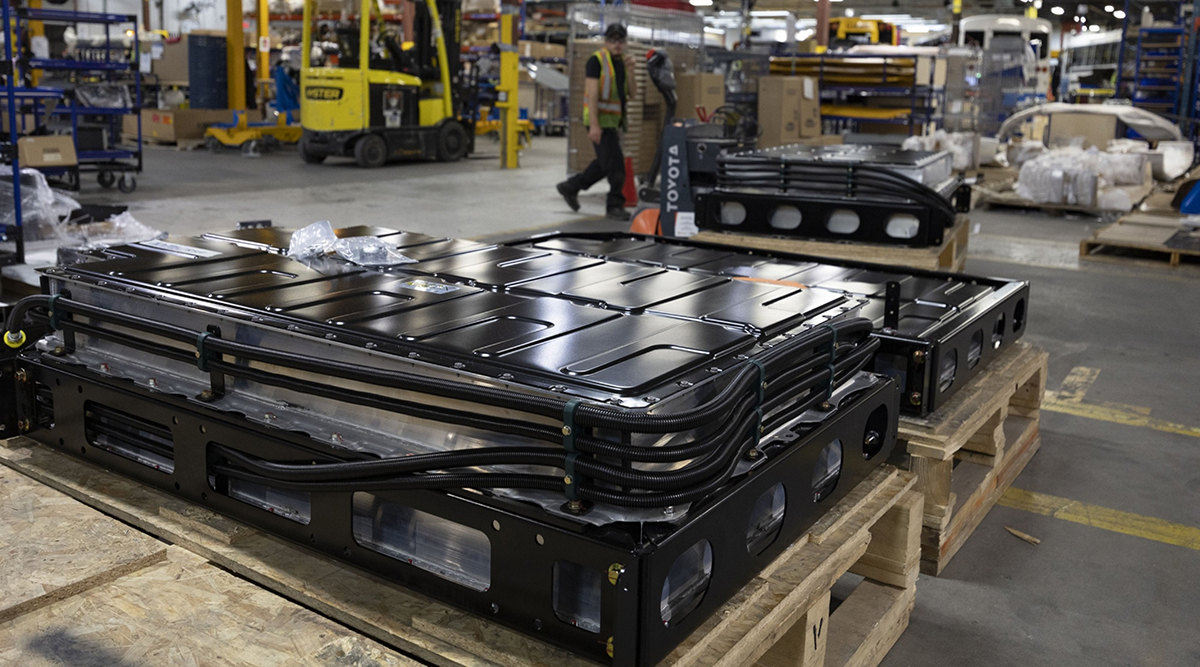 It’s official: the supply chain for electric vehicle batteries is coming to America.

Redwood Materials Inc., the battery recycling company created by Tesla co-founder J.B. Straubel, said it has reached a deal to supply Panasonic with billions of dollars in critical battery components that will be produced in the U.S. for the first time.

The agreement marks the first major contract for domestically processed cathode material, a substance that’s responsible for more than one-third of the expense of a finished battery pack. The material will supply Panasonic’s new battery plant in Kansas City, Kan., when mass production begins there in 2025. The plant is expected to produce cells primarily for Tesla electric vehicles.

“Panasonic has been a partner for many years, but this is very significant,” Straubel said in an interview. “This is a large portion of their cathode supply. It’s such an impactful announcement for the U.S. supply chain in general — and of course for us as a company.”

Straubel declined to specify the amounts of material to be supplied or the specific price structure, other than to say that it would total billions of dollars over several years.

A New US Industry

Straubel left Tesla in 2019 after he grew concerned about a widening gap between electric vehicle demand and the availability of materials needed to make them. Redwood quickly rose to become the biggest lithium-ion battery recycler in the U.S., before branching out into anode and cathode production.

Every battery has two electrodes — a cathode and an anode — between which trillions of charged lithium atoms travel. It’s the cathode that largely determines a battery’s performance, cost and environmental footprint. Cathode today is produced almost entirely in Asia.

Straubel says the materials in Redwood’s cathode will help electric vehicles qualify for new $7,500 federal tax incentives available under stringent guidelines that will take effect between now and 2024.

To qualify for the full incentive under President Joe Biden’s 2022 Inflation Reduction Act, half of a battery’s minerals (by cost) must either be recycled in North America or mined from a country with which the U.S. has a free-trade agreement. The cathode Redwood plans to provide Panasonic will be made with 100% recycled cobalt and 25% to 30% recycled nickel and lithium, Straubel said. He declined to say where the company would procure the remaining mineral supplies.

“We were already going at supersonic speeds,” Straubel said, but the manufacturing provisions in Biden’s climate plan were “like what happens if you attach a rocket engine to a supersonic airplane.”

Cobalt is one of the most expensive and controversial ingredients for batteries. The majority of the world’s supply comes from the Democratic Republic of Congo, where allegations of human rights abuses in the mining industry have been common. The reason Redwood has such a large amount to recycle is that it’s used in much higher concentrations for batteries that power consumer electronics than for those used in EVs. For example, it would take 6,147 recycled iPhone batteries to provide enough lithium for a Tesla Model Y, but only 166 iPhones to provide enough cobalt, according to BloombergNEF data.

It’s such an impactful announcement for the U.S. supply chain in general — and of course for us as a company.

For now, most battery recycling consists of consumer electronics and scrap material from factories. That’s expected to change dramatically as the first fleets of mass-produced EVs continues to age.

Panasonic’s new Kansas City plant will be the company’s second major battery factory in the U.S., after the Nevada Gigafactory it jointly operates with Tesla. Straubel said the $4 billion Kansas City plant is likely to eventually exceed Nevada production. Redwood already recycles the scrap materials produced at Panasonic’s Nevada factory, and in turn will supply that factory with refined materials, including anode copper foil, by the end of this year. 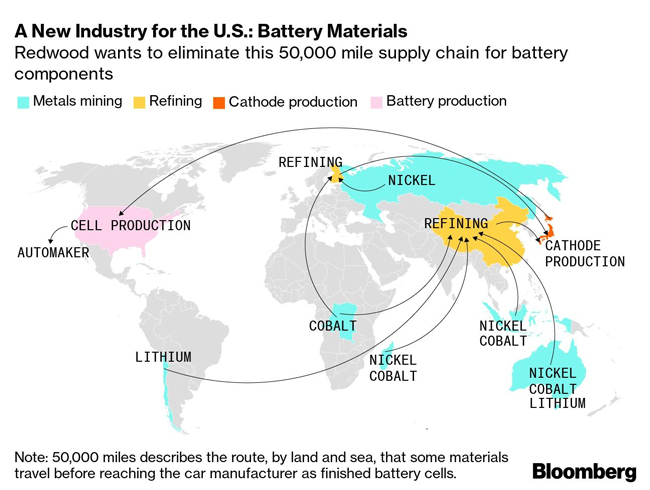 Enough for One Million Cars

Redwood says it is spending billions of dollars to bring its cathode production up to the equivalent of 100 Gigawatt hours a year by 2025. That’s enough material for 1 million EVs. By 2030, the company said it plans to expand to 500 GWh per year. It currently has three recycling and production facilities in Nevada.

Straubel says words like “cathode” and “anode” still sound strange to most car buyers, but over time they will become as familiar as “spark plugs” and “catalytic converters” are today.

“It’s just an incredibly high percentage of the cost of the car,” Straubel said of cathode. “As the world is shifting to electrification, there’s going to be a bit of a new vocabulary and new list of components that everyone will get familiar with.”