Automakers Weigh the Electrification of Pickups 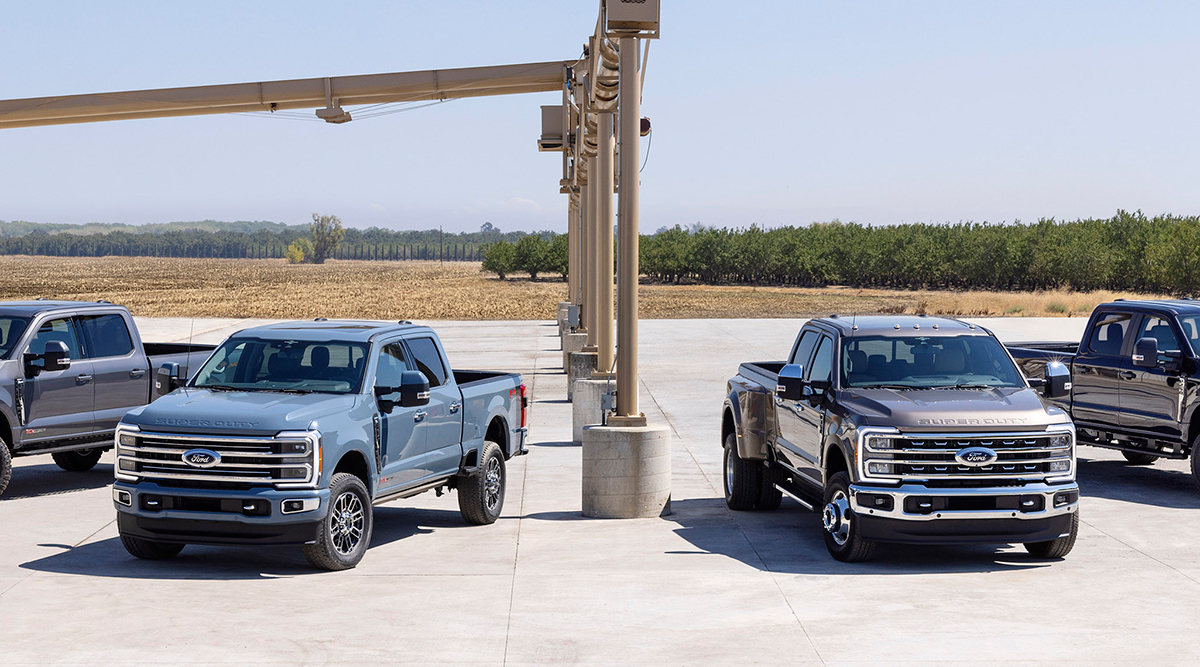 The Detroit Three automakers are pushing toward an electrified future, but they’re not yet putting their gas and diesel-powered pickup trucks on the back burner.

After all, the profitable sales of these fuel-guzzling vehicles are funding the expensive transition to electric vehicles, which promise zero emissions and freedom from high gas prices. General Motors Co., Ford Motor Co. and Stellantis NV over the last several weeks have revealed pickup truck updates for next year, but don’t expect electrified versions of these beefy pickups anytime soon.

“This will be the dead last segment that it’s going to happen to because they are the most demanding and it would be the most taxing on the electrical system,” said Ivan Drury, director of insights for Edmunds.com Inc., a vehicle information website. The batteries needed to tow the thousands of pounds pickup customers demand might be available, but they cost more and offer less range than gas and diesel powertrains.

The $110,595 Edition 1 Hummer EV pickup, for example, has a large 200-plus kilowatt-hour battery with a range of 329 miles, according to documents filed with the Environmental Protection Agency as previously reported by Car and Driver. The Hummer can tow up to 7,500 pounds. 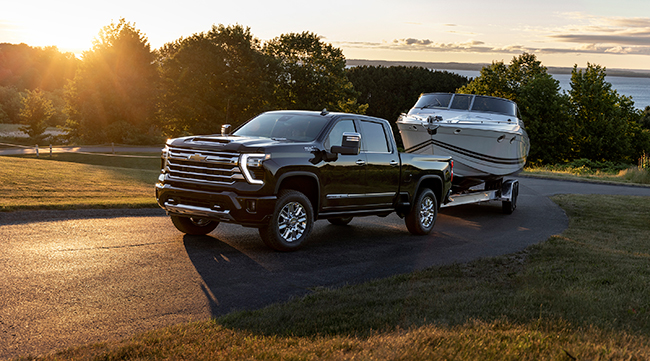 During the January 2022 reveal of the electric Silverado, GM CEO Mary Barra said the automaker will electrify pickup vehicles like light-duty vehicles by 2035: “These all-electric HD trucks will be engineered to deliver effortless heavy-duty hauling and towing, while offering customers amazing new features and range needed to get the toughest jobs done.”

Ford just upped the price of its 2023 electric F-150 Lightning Pro, geared toward commercial customers, by $5,000 to $51,974. A Lightning with a standard battery pack gets 98 kWh of capacity to go 240 miles on a charge. The Lightning with an extended-range pack with 131 kWh of capacity gets 320 miles on a charge. With an optional max trailer tow package, the Lightning can tow 10,000 pounds with the larger battery and 7,700 pounds with the standard size.

Ford hasn’t yet revealed pricing or towing capabilities on its recently revealed gas- and diesel-powered 2023 Super Duty lineup, but the automaker is shooting for “unparalleled capability” on gooseneck towing, fifth-wheel towing, conventional towing, pintle hitch towing and payload capacity. The 2022 Super Duty can tow 21,000 pounds for conventional and 37,000 pounds for gooseneck.

At an event revealing the Super Duty earlier this month, Ford CEO Jim Farley told media as reported by Automotive News: “If you’re pulling 10,000 pounds, an electric truck is not the right solution. And 95% of our customers tow more than 10,000 pounds. This is a really important segment for our country and it will probably go hydrogen fuel cell before it goes pure electric.”

Hydrogen fuel cells could be used to convert larger products like pickup trucks to zero-emission products since fuel cells offer longer range and the fuel-cell system is lighter than a battery, but the use of fuel cells would also require an infrastructure network of charging stations.

Ram has teased an electrified version of its light-duty truck and said it will have a full portfolio of electrified vehicles in most segments by 2025 and all segments by 2030. The Stellantis NV truck brand in September announced it was adding a Rebel trim option to the 2023 Ram 2500 HD lineup. The truck’s maximum tow limit is 16,870 pounds.

Pickup drivers will be tough to turn into EV buyers, Edmunds’ Drury says, because they are taking a risk on capability, which is a tough gamble for the commercial customers relying on their fleets to get the job done.

“With these consumers,” Drury said, “it’s still go with what you know.”

Fleet managers also look at the overall cost of ownership, so they will want to know that transitioning “is actually going to get the job done and save money,” he said. “And right now, I think that would be kind of a hard thing for a lot of them to even make pencil out.”

Ross Thomas, 80, and his wife, Bonnie, of East Jordan, Mich., tow their camper with a V-8-powered, 2015 Ford F-250 that weighs 10,000 pounds. They live in the East Jordan City Tourist Park during the summer, then commute to warmer climates in Texas and Florida during the winter. 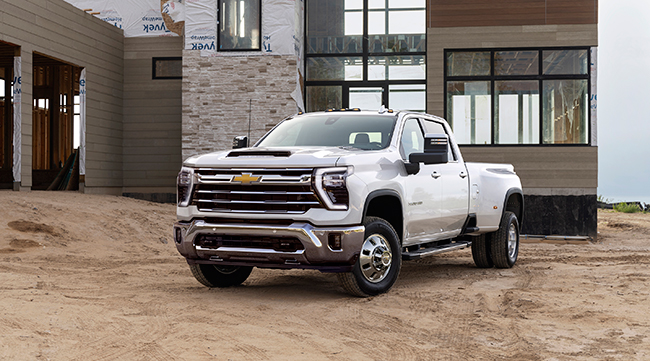 Pickup EV trucks are in their infancy with manufacturers like Bollinger making Classes 3-6 chassis and GM not planning electrified HD versions of its pickups until the next decade.

“This is not an EV,” said GMC President Duncan Aldred when he introduced the all-new Sierra 2500 HD this month with its tried-and-true, 6.6-liter Duramax turbo-diesel V-8. “The Sierra Heavy Duty will become an EV in time, but it will be toward the end of the 2035 transition.”

Real-world experience with EV pickups is limited with new entries like the Ford F-150 Lightning and Rivian R1T first to market. But the towing capabilities of the Lightning are not encouraging to pickup owners.

A recent tow test by truck test site TFLTrucks.com with a 6,000-pound trailer behind the Lightning found range degradation of 70% to just 95 miles — a problem for long-distance hauls. While diesel and gas engines also suffer range degradation when towing, they offer more reliable range and refueling infrastructure.

Ross Thomas typically gets about 280 miles of range with his V-8-powered F250 — and quick refueling. Drain a Lightning’s battery after 95 miles and it will take an hour to fill it full of electrons at a DC fast charger. 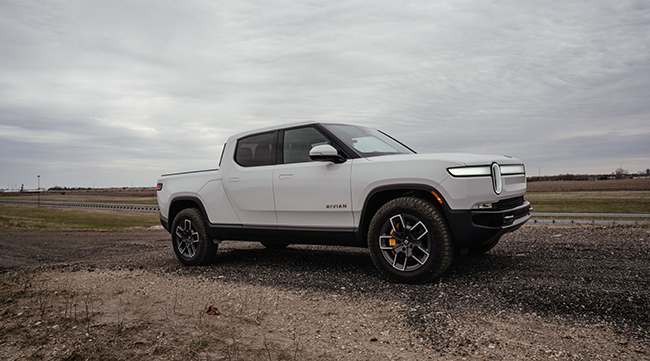 EV range limitations are an issue for Randy Hartman of Columbus, Ohio, too.

“It would have taken me forever to tow my 28-foot trailer over the mountains with an electric truck,” said Hartman, 63. His Ram is stuffed with a 7.2-liter diesel and gets 300 miles between fill-ups at 11 mpg.

Jeremy Ingram knows electric vehicles — his 386 Powersports in Rochester Hills is the exclusive Michigan dealer for Volcon EV motorbikes — but he prefers gas trucks to haul them to customers and sporting events.

“For the loads we carry we need gas,” said Ingram who owns a fleet of Ford, Ram and Chevy HDs. “You know Michigan. You put a load on batteries — and then add the cold weather — and they will die in half the time.”

With these consumers, it's still go with what you know.

His brawny Ram 5500, Ford F-550, Chevy 4500 dually pickups, for example, do heavy lifting, including 15,000-pound flatbeds that take multiple bikes to customers around the Midwest. They also do double duty — along with a GMC Sierra, Ford F-250 and Ford F-350 cube truck — in servicing customers with Ingram’s contracting firm, Ingram Roofing.

Ingram worries the short life of battery packs would also change his business model. “I don’t want to buy a fleet of electric trucks not knowing their life span,” he said, citing a 1996 diesel Ford F-350 he uses that’s still going strong. “I’d have to go to a lease fleet.”

For Michigan Asphalt Paving foreman Tim Davidson in Birmingham, it’s not the range — it’s the expense and logistics that are insurmountable obstacles to going electric.

His company serves a variety of paving needs in the Metro Detroit area with a herd of diesel-powered vehicles from dump trucks to Caterpillar track loaders to the semis that transport them. One of the vehicles in his fleet is a 1995 Ford F800 Class 6 truck (GVWR: 26,000 pounds) that is 27 years young and still hauling up to 45,000 pounds of aggregate daily.

“Electrics are a big waste of time and money,” said Davidson as he dug up a driveway with his Cat, then dumped it into the back of the hulking Ford. “Reliability is a real issue for me. What if I get stuck on the way to a job?”

His fleet is looked after by a diesel service company and his fuel is delivered to tanks on his property where he fills up every night. Building on-site electric capacity to power his trucks would be costly.

Bollinger Motors in Oak Park, Mich., is the only manufacturer making a Class 4 electric truck (GVWR: 14,001-16,000 pounds). While assembling battery-powered trucks with 100-mile range to suit contractors like Michigan Asphalt, Bollinger is counting on the billions of dollars in the federal Inflation Reduction Act to help reduce the costs. Under the IRA, a Bollinger buyer would be eligible for a 30% tax credit up to $40,000.

But for pickup customers who need the dexterity of trucks for long and short hauls, EVs are a nonstarter.