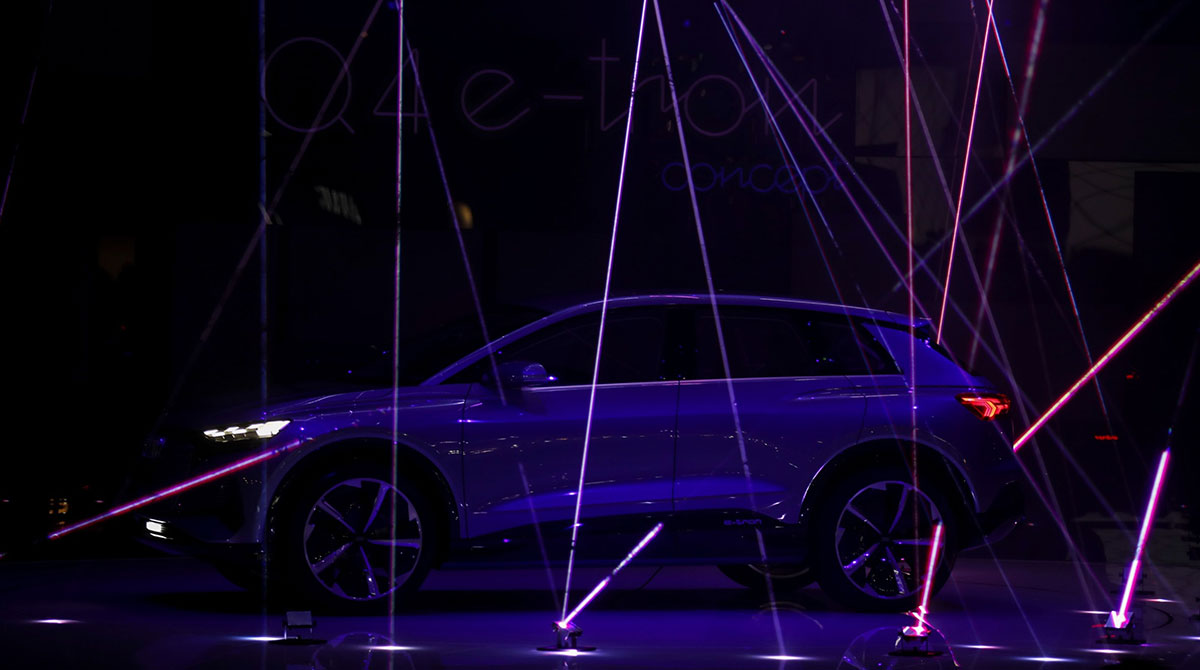 The model Audi will unveil April 14 is among a dozen models including VW’s ID.4 and an electric version of the Porsche Macan that should enable the VW group exceed Tesla’s deliveries by 2023, Bloomberg Intelligence analyst Michael Dean said in a recent report. VW has targeted selling roughly 600,000 purely battery-powered cars this year as Europe’s biggest carmaker seeks to gain ground on its California-based rival.

The Q4 e-tron “is Volkswagen’s first real competitor to Tesla, being a modest-sized SUV which hits the right segment,” Dean said. He expects the model to offer more than 300 miles of battery range and sell for about 40,000 pounds ($55,000).

The wait is over. Watch the unveiling of the Audi Q4 e-tron models and be a part of the celebration.

So far this year, Tesla has done well defending its dominance. Demand for the Model Y and Model 3 in China supported strong first-quarter deliveries and has reignited investor optimism about the world’s most-valuable automaker holding its own in an increasingly crowded EV market. Incumbent manufacturers including VW, General Motors Co. and Mercedes-Benz have stepped up plans to churn out EVs while smaller upstarts such as Nio Inc. and XPeng Inc. also vie for tech-savvy customers.

VW has positioned Audi at the center of its challenge to Tesla by building up its EV lineup and tasking it with taking lead on developing software — an area where Tesla remains well ahead. Audi is also responsible for running an engineering task force called Artemis that’s looking to speed up vehicle development.

The Q4 e-tron models “play a central role in the brand’s electrification strategy by launching in a particularly popular market segment,” Hildegard Wortmann, Audi’s sales chief, said in a video message. They represent the entry point of Audi’s electric offerings and “showcase how our brand and our design are moving forward.”

VW group’s biggest profit contributor after Porsche unveiled the $121,000 Audi e-tron GT sports car in February as Tesla prepared to amp up the Model S sedan with a fresh performance version. While the e-tron GT shares underpinnings with the Porsche Taycan, the Q4 e-tron is based on VW’s architecture for mass-market electric cars.

The platform, called MEB, stacks up well against Tesla on a number of key aspects, UBS Group AG analysts said in a detailed report last month. MEB underpins the VW brand’s ID.3 and ID.4 models as well as Skoda’s upcoming Enyaq SUV. A separate platform for other upscale Audi and Porsche models, dubbed PPE, will launch next year.