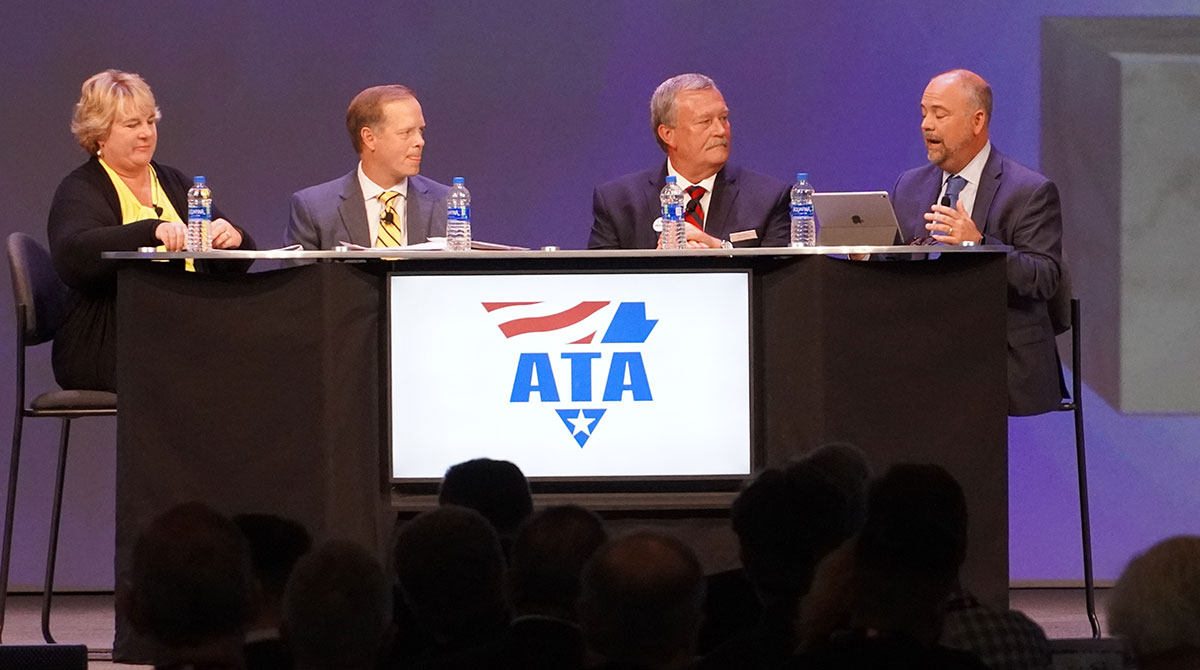 SAN DIEGO — For the third year in a row, the driver shortage is the top-ranked issue for trucking fleets, as they struggle to recruit and retain qualified drivers, according to the American Transportation Research Institute.

The hours-of-service rules remained the No. 2 issue in the survey for a second consecutive year, reflecting what ATRI and ATA officials said was the industry’s call for additional flexibility in the rules, particularly the sleeper berth provision.

The issues were discussed by a panel led by Rebecca Brewster, CEO of ATRI. Panelists were Bob Costello, ATA’s chief economist; James Reed, CEO of USA Truck Inc.; and Gary Helms, a Covenant Transport driver and an ATA America’s Road Team captain for 2017-18.

Helms said the HOS rules were not flexible enough and did not take into account the sleeping habits of drivers. He also told an audience of about 500 that the rules, with their mandated rest breaks, have worsened truck parking.

But a driver shortage is the industry’s biggest challenge, Costello said, which could balloon to 105,000 drivers in 2023 and 160,000 drivers in 2028. If the shortage reaches 160,000, then the United States could see real disruptions in the supply chain, he said.

“The driver shortage is an over-the-road, for-hire truckload problem,” Costello said. “This is not unique to the U.S.”

Costello said truck driving can support a family of four, and that should be able to attract potential drivers away from lower-paying jobs.

Two issues appeared on this year’s list for the first time, ones that also impact the industry’s ability to recruit and retain qualified drivers: compensation, and detention and delay at customer facilities.

Driver compensation ranked third and represents two sides to a complex issue: Motor carriers have raised pay significantly over the past year in response to the driver shortage and to drivers who are concerned that their pay has not kept pace with inflation.

Costello noted that compensation shot up as the freight economy boomed in 2017 and the beginning of 2018. It’s not an issue that carriers can fix easily.

“How do you walk those pay increases back?” Costello said. “I don’t think you can.”

Driver detention at customer facilities, making its debut at No. 4, reflects growing industry concern over delays that create impacts for drivers’ HOS compliance, compensation and ability to find safe, available truck parking, according to ATRI.

Reed said driver surveys can be collected about customers who make drivers dwell a long time at the unloading area. Reed said he uses that information to negotiate with businesses.

“I will price lanes differently based on dwell-time characteristics and how they treat our drivers,” Reed said. “Most, especially the large shippers, want that feedback.”

The lack of available truck parking rounds out the top five issues but ranks third among commercial driver respondents after compensation and HOS rules.

Rounding out the list were No. 6 driver retention, No. 7 the electronic logging device mandate, No. 8 “Compliance, Safety, Accountability,” the data-driven safety compliance and enforcement program of the U.S. Department of Transportation, No. 9 infrastructure and congestion and No. 10, the overall U.S. economy.

The complete results of the annual survey were generated by more than 2,000 responses from motor carriers and commercial drivers.