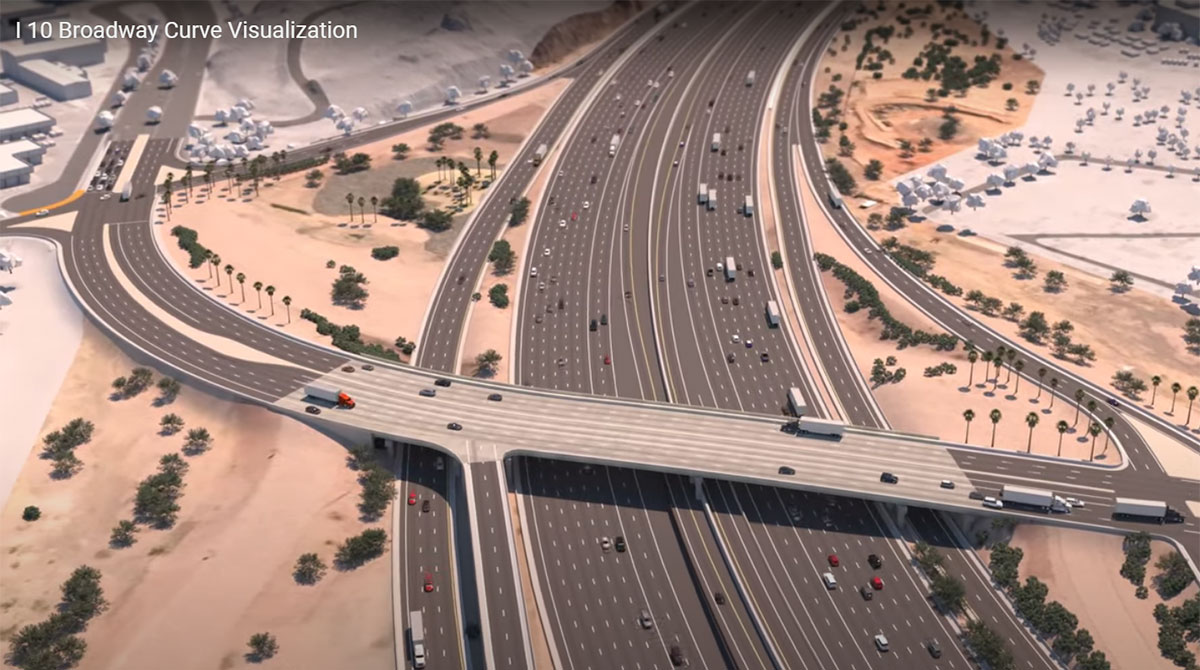 I-10 Broadway Curve Visualization by azdot.gov

The Arizona Department of Transportation has selected a preferred developer for a project to reconstruct a portion of Interstate 10 in Phoenix that the agency has identified as a key commerce corridor.

I-10 stretches across the southern U.S. from Santa Monica, Calif., to Jacksonville, Fla. It provides an important conduit for freight coming from the ports of Los Angeles and Long Beach. ADOT announced a joint venture team representing Pulice Construction Inc., FNF Construction Inc., Flatiron Constructors and T.Y. Lin International has been selected as the preferred developer for the Broadway Curve Improvement Project.

The objective is to improve an 11-mile stretch of I-10 that runs between I-17 and state Route 202. Located southeast of downtown Phoenix, the project zone runs from the Salt River to Chandler and encompasses Tempe and Guadalupe. ADOT, city representatives of Phoenix and Tempe, and the Maricopa Association of Governments were involved in the decision regarding the developer.

“This project will improve safety and efficiency for hundreds of thousands of drivers who travel through the Broadway Curve each weekday and generate $658 million in new economic activity,” said Phoenix Mayor Kate Gallego, who also serves as chair of the Maricopa Association of Governments’ Transportation Policy Committee.

Proposed improvements include widening I-10 to six general-purpose lanes and two high-occupancy vehicle lanes and building a collector-distributor road system, which is meant to separate local and through traffic. The project also will include modifying I-10’s connections with state Route 143, Broadway Road and U.S. Route 60, as well as adding three pedestrian bridges to connect communities.

The project will be partially funded by the Maricopa Association of Governments’ Proposition 400, which is a sales tax dedicated to transportation purposes. Maricopa County voters approved Proposition 400 in 2004. 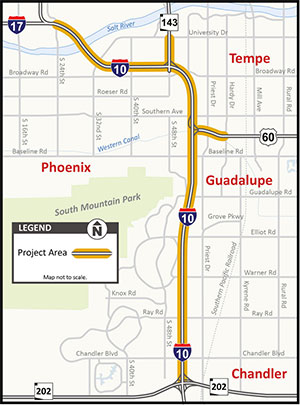 Encompassing cities such as Phoenix, Scottsdale and Mesa, Maricopa County is rapidly growing. According to the U.S. Census Bureau, the county’s population was 4.4 million in 2019, a 17.5% increase from 2010 figures.

“Arizona continues to build the infrastructure of the future and strengthen our transportation network,” Gov. Doug Ducey said. “When completed, this project will help power Arizona’s economic expansion and reduce travel times for hundreds of thousands of commuters.”

Negotiations between ADOT and the joint venture team began this month. If the negotiations are successful, ADOT expects to finalize the contract in early 2021. Construction is scheduled to begin in 2021 and continue for four years.

The Phoenix region, located at the nexus of I-10 and I-17, is an important place for freight movement. According to ADOT’s State Freight Plan, the greatest concentration of freight clusters is located along the I-10 corridor in Phoenix and Tucson. The freight plan notes that, of the freight traveling to, from or within Arizona, more than 83% travels by truck.