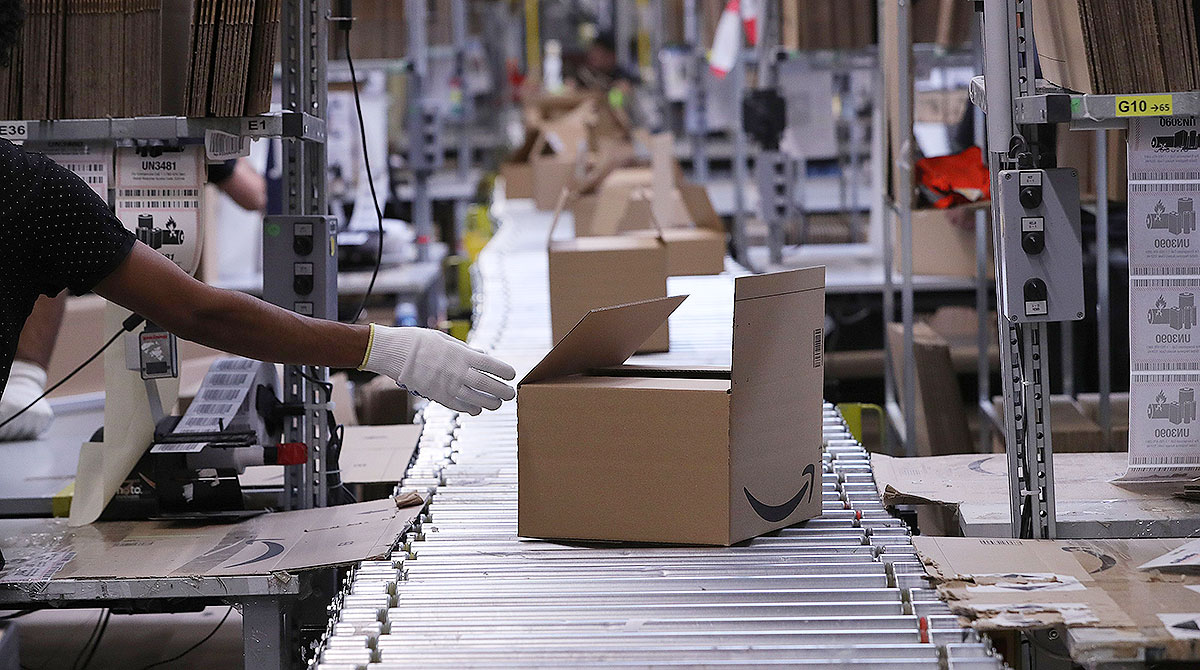 Empty cardboard boxes pass along a conveyor from the packing station at an Amazon fulfillment center in Koblenz, Germany. (Krisztian Bocsi/Bloomberg)

Amazon.com was handed a French ban on sales of nonessential items after losing the first round of a court fight with labor unions that said the company wasn’t doing enough to protect staff from the COVID-19 pandemic.

Amazon said in a statement is appealing the ruling, a move that suspends the court’s decision.

The world’s biggest online retailer initially was given 24 hours to comply with the ruling by the court in Nanterre, close to Paris, or risk symbolic fines of 1 million euros ($1.1 million) for each day’s delay.

“We disagree with today’s decision by the Nanterre court and are currently assessing its implications for our French logistics sites,” Amazon said. “We will also continue to work with all stakeholders and provide the necessary clarifications as we have done since the beginning of this unprecedented crisis.”

Amazon “evidently failed to comply with obligations to protect the health of employees,” judges said in their April 14 ruling. The court also said the retail platform should carry out a more thorough evaluation of the coronavirus risks in its warehouses.

In France, where several workers have been tested positive for COVID-19, pressure also came from the government. Labor minister Muriel Penicaud demanded late last month an improvement to the working environment for the firm’s employees, saying that “protection conditions are insufficient.”

The U.S. giant has been one of the standout performers as the pandemic forces store closures, amplifying e-commerce demand. Earlier this week, Amazon said it would hire an additional 75,000 workers in the U.S. to meet the spike in demand. The company already filled 100,000 previously announced temporary and full-time positions.

A request for an urgent ruling was lodged by a labor union last week asking to ban Amazon from continuing to employ staff on its six French sites or, alternatively, reduce the company’s activity to essential goods. The Nanterre court ruling said Amazon would be allowed to return to a “normal” activity once its has properly evaluated the risks linked to COVID-19 with staff representatives and put in place appropriate safety measures.

Also on April 14, Amazon confirmed that it had fired Emily Cunningham and Maren Costa for violating company policy. The two employees, who worked at Seattle headquarters, had taken to Twitter recently to voice concerns about the treatment of workers during the coronavirus pandemic; they’ve also long been involved in an employee campaign urging Amazon to do more to fight climate change. A third employee, Bashir Mohamed, who worked in a warehouse in Minnesota, also was fired. The Washington Post and BuzzFeed News reported earlier on the firings, which took place last week.

COVID-19 is our biggest challenge yet. From flying masks around the world to rolling out daily temp checks, we’ll continue rising to the challenge of keeping our team safe. https://t.co/uZBb4bl9px pic.twitter.com/AQBH7W1sd2 — Amazon (@amazon) April 14, 2020

U.S. senators, labor leaders and some of Amazon’s own workers have expressed concern that the company hasn’t been doing enough to keep employees safe. Groups of workers have staged walkouts at Amazon warehouses in New York, Illinois and Michigan.

Amazon said the two employees at its headquarters had been terminated for violating its policy prohibiting employees from speaking publicly about company matters.

“We support every employee’s right to criticize their employer’s working conditions, but that does not come with blanket immunity against any and all internal policies,” the company said in an emailed statement. “We terminated these employees for repeatedly violating internal policies.”

The company also has defended its work to keep warehouses safe, saying it’s following public-health guidance to limit employee contact in its facilities and supporting employees diagnosed with the disease. Amazon has offered temporary raises and more lucrative overtime to warehouse employees working during the pandemic.

Richard Trumka, president of the AFL-CIO, called the firings “outrageous” on Twitter. “Amazon needs to stop retaliating and start making sure employees are safe, working in sanitary conditions with proper protections,” he said.

Trumka was among the signatories of a letter that leaders of the largest U.S. labor groups, joined by New York elected officials, sent Amazon CEO Jeff Bezos criticizing the company’s decision to fire Chris Smalls, who led a walkout at Amazon’s Staten Island warehouse. The company says he was terminated for violating a company-ordered quarantine after coming into contact with someone diagnosed with COVID-19.

Matt Day contributed to this story.