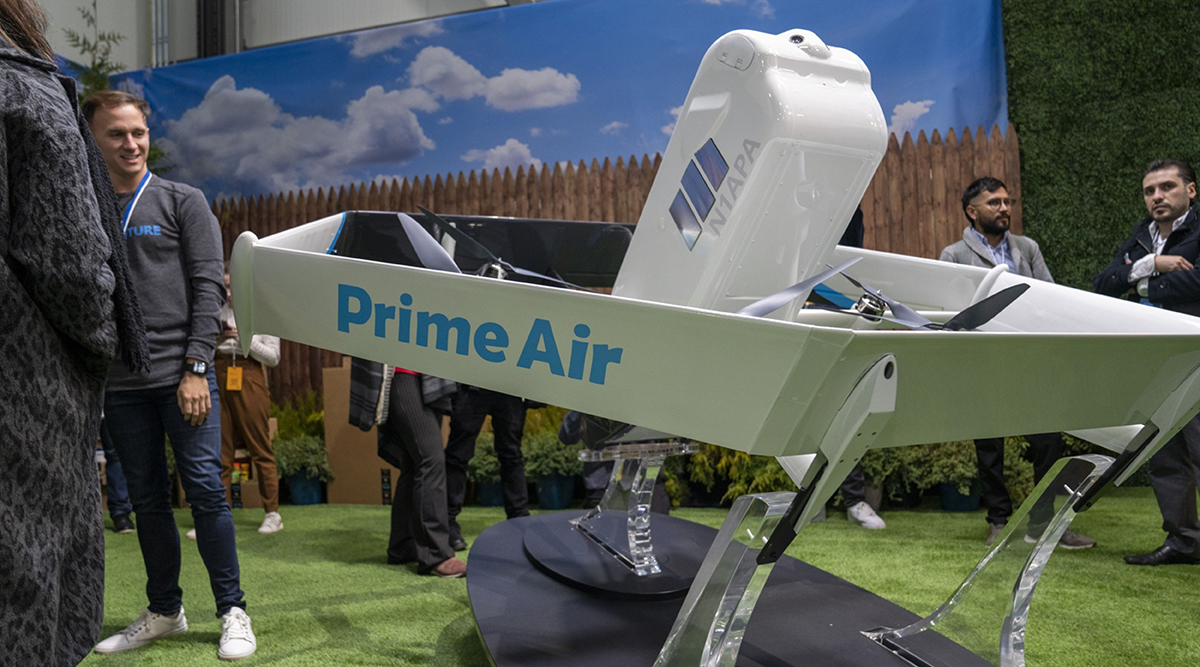 The Amazon Prime Air MK27-2 drone on display in the Neighborhood of the Near Future exhibit during the Delivering the Future event at the Amazon Robotics Innovation Hub in Westborough, Mass. (M. Scott Brauer/Bloomberg News)

Amazon.com Inc. unveiled a new delivery drone on Nov. 10 that’s smaller, makes less noise and can fly through light rain, the latest effort to get the troubled and long-developing project off the ground.

The company has spent nearly a decade pursuing founder Jeff Bezos’ vision of autonomous drones that can deliver a package weighing less than 5 pounds as little as 30 minutes after a customer places an order. Beyond speeding delivery times, drones could significantly cut the cost of delivery, which still mostly requires a person driving a vehicle to someone’s home.

The new drone, dubbed MK30, will go into service in 2024 and replace the existing MK27-2, the model that will be used to make deliveries in Lockeford, Calif., and College Station, Texas, this year. The new unit has a longer range, can fly in a wider range of temperatures and has new safety features, Amazon said.

It will be years before the Federal Aviation Administration approves commercial drone deliveries, although the agency is letting companies conduct test flights in increasingly populated areas so long as they don’t pose significant safety risks. Amazon’s drone program has been beset by delays, crashes and high turnover, a Bloomberg investigation found. The company is competing with Alphabet Inc., Walmart Inc., UPS Inc. and various startups to convince federal regulators that drone deliveries can be conducted safely.

Amazon introduced the new drone during a press event at a robotics research and manufacturing facility outside of Boston. Earlier on Nov. 10, the company announced a new robotic arm capable of identifying and grabbing single items, potentially a major milestone in its effort to build more automated warehouses and reduce its reliance on human workers.