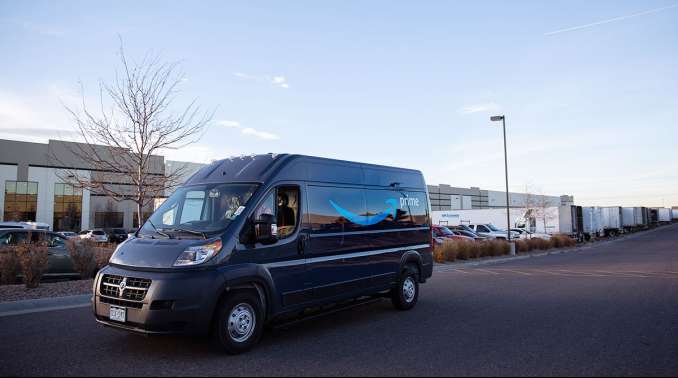 Jeff Bezos captured the world’s imagination when he appeared on CBS’s “60 Minutes” and pledged to fill the skies with package delivery drones.

Five years on, Amazon.com Inc.’s chief executive officer is betting on decidedly more terrestrial technology: Drivers. As in real people. Tens of thousands of them. High-tailing it through town in gas-slurping vans to leave packages on doorsteps just like the milkman, postal worker, UPS guy and pizza dude before them.

Bezos this summer issued a call-to-arms to aspiring entrepreneurs, offering them a chance to earn $300,000 a year by starting their own businesses making Amazon deliveries. All for as little as $10,000 up front, far less than the $250,000 it takes to open a fast-food franchise like McDonald’s or the $1 million required to buy a typical FedEx delivery business. 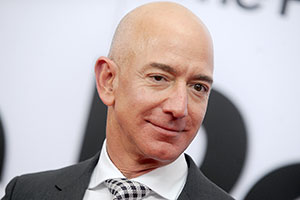 Instead of charting a future that makes drivers obsolete, Amazon is so dependent on them it’s copying FedEx Corp. to build a network of independent couriers around the country in a frantic effort to keep pace with demand that peaks in December. To entice interest, Amazon uses its bargaining power to get partners good deals on vans and insurance and offers them a steady stream of packages.

The Bezos proteges take on the biggest challenge of all: recruiting and hiring drivers willing to meet Amazon’s high standards for low pay. All when there are plenty of other jobs to pick from. The effort puts Amazon in legally murky terrain where it has to be careful how much control it exerts over people employed by different companies. The company already faces multiple lawsuits from delivery drivers claiming to be stiffed wages by Amazon partners.

Those workers say Amazon is on the hook, as well, since they toil on the company’s behalf. But the risks could be worth it if Amazon finds a legal way to add drivers and vans without spending its own money. The model gives it far more negotiating power over each small business partner than it has with United Parcel Service Inc., FedEx and the postal service. 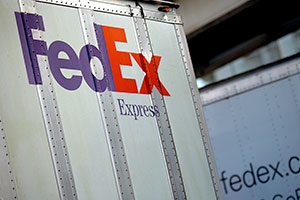 “There’s all these futuristic visions of drones delivering things and robots delivering things, but all of that innovation flies in the face of some sort of regulation and those regulations move very slowly,” says Mike Howell, CEO of the on-demand delivery company Dolly. “Amazon doesn’t have time to wait for drones. It has to pursue this old-guard model now more out of necessity than out of desire.”

So far, Amazon has attracted tens of thousands of aspirants eager for a ground-floor opportunity serving the fast-growing company led by the world’s wealthiest man. Applicants go through phone interviews followed by several days of training. In just a few months, hundreds of new businesses have sprouted up around the country that employ thousands of drivers. Even more hopefuls are on a waitlist eager for Amazon to expand further next year.

Riccardo Drago is among the new partners. He had been making deliveries through Amazon Flex, an Uber-type application that lets people deliver Amazon packages in their own cars. Drago and his wife, Judy, always dreamed of starting their own business, so they accepted an offer from Amazon to help test the new delivery partner concept last year before it was announced.

Drago, who previously owned a bodyguard business, was eager to make a good impression on his first day, but there was a big problem. He had only two of the five vans he ordered, and his company was assigned five routes. Amazon offered to divert the packages, but Drago put two workers in each van, doubled their loads and did one of the routes in his own Hummer. 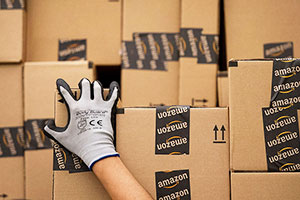 When he returned to the warehouse thinking he was finished, an Amazon manager asked him, “Hey Riccardo, how much do you love me? Will you do one more route for me?”

Without balking, Drago threw dozens of additional packages in his car, raced through Denver and upon his return to the warehouse less than an hour later, collapsed on the floor. “I became the talk of Amazon after that,” he says. Drago’s business now has a motto: “We don’t give up routes. Ever.” And his drivers will double up on packages to cover for co-workers who are sick or falling behind.

That’s the can-do spirit Bezos is counting on to meet insatiable demand from Amazon shoppers without breaking the bank. The Dragos now have 42 vans and 70 employees who each deliver about 250 packages in a typical day. Their profit is about $40,000 each month, about $1,000 per van, Drago says. The biggest challenge is hiring and retaining drivers, who earn about $150 for each eight-hour shift. “Denver has low unemployment,” Judy Drago says. “So it’s tough to find drivers.” Her husband says he keeps them motivated with gestures like serving homemade Italian meatballs at the end of shifts.

If the FedEx experience is any guide, the Dragos and others could be building valuable businesses. Buyers for FedEx parcel delivery routes can be found in as little as a few weeks, says Tony DiNitto, who once operated routes and now advises people who want to buy their own.

The price for FedEx routes have climbed over the last five years to about 3.3 times cash earnings from about 2 times. The average number of routes sold by owners is about 10 at an average price of just under $1 million, he says. One route typically earns about $25,000 a year before taxes, providing a payback on investment in three or four years. 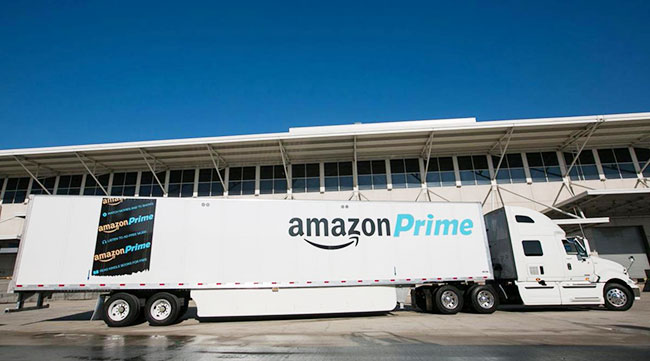 “I don’t know of a better business to buy than FedEx routes,” he says. “The revenue is very stable and growing. The valuation of the business itself has slowly and continuously grown over the last decade.”

That model has been good for FedEx, as well. The company has 5,600 service partners who employ nearly 50,000 people, providing “increased service capacity and operational flexibility,” the company said in an e-mailed statement.

While FedEx wants partners, it doesn’t let any of them get too big and usually limits the number of routes to about 30, DiNitto says. Amazon is capping most of its delivery partners at about 40 vans, though some exceed that limit to meet demand.

Amazon is mostly a victim of its own success. The company has 97 million U.S. Prime members who pay monthly and annual fees in exchange for fast delivery, according to Consumer Intelligence Research Partners. Those customers have little incentive to consolidate their orders to make shipping more economical.

Shipping is one of Amazon’s fastest-growing expenses and consistently outpaces online sales growth. The company must find cheaper ways to deliver packages or its e-commerce business could be unsustainable without further price hikes. Amazon increased the yearly cost of Prime membership by 20% this year to $120, the first hike since 2014. Any company delivering packages for Amazon has to pay for vehicles, gas and insurance.

A key way for Amazon’s new partners to keep delivery costs down while making a profit is to pay drivers less than the competition. UPS’ union drivers earn a top wage of nearly $80,000 a year, excluding overtime, plus health care and pension benefits. Those wages will go up 9.4% in 2022. Median annual pay for union postal workers is $57,000. Most FedEx contractors pay drivers about $40,000 a year and some offer health-care benefits. 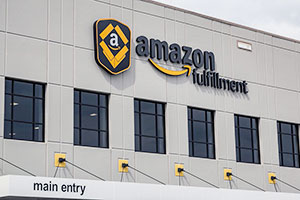 FedEx drivers aren’t unionized and turnover is higher than UPS, which has a waiting list to become a driver. Amazon, which announced in October that all of its warehouse workers would be paid at least $15 an hour, doesn’t dictate how much delivery partners pay drivers. Interviews with two Amazon delivery partners indicate full-time drivers earn between $30,000 and $40,000 a year, excluding overtime.

Beyond saving on pay, the delivery partner model lets Amazon train the owner once, who then bears the cost of recruiting, hiring and training the rest of the drivers in a high-turnover business. That can cost up to $4,000 per person, says Atif Siddiqi, CEO at Branch Messenger.

“Finding and retaining people is very costly right now,” he says. “But they shouldn’t have a hard time finding people who want to start their own businesses and run things.”

Amazon’s new delivery model has already come under fire in lawsuits alleging its partners have skirted overtime laws by paying drivers daily rates rather than hourly wages. One case filed this month in Illinois calls the program an “unlawful scheme to attempt to avoid responsibility for paying” delivery drivers.

FedEx was forced to pay a $13 million settlement for lawsuits that claimed “misclassification” of workers as independent contractors cost them wages. In response to those lawsuits, FedEx now requires its service providers to have drivers on payroll. Still, more lawsuits on behalf of drivers in several states are challenging FedEx’s new terms. Amazon paid a similar settlement regarding the use of independent contractors in a California lawsuit that alleged contract delivery drivers were shortchanged.

“The primary problem is finding people willing to do this work for $15 an hour who won’t hurl packages 30 feet towards a porch from the van window,” says Marc Wulfraat, president of the logistics consulting firm MWPVL International Inc. “It doesn’t matter how many entrepreneurs Amazon throws at this, that problem remains.”

These are the challenges Bezos & Co. will be forced to endure — at least until fleets of robot drones take to the skies.

FedEx to Cut Management Jobs by More Than 10%