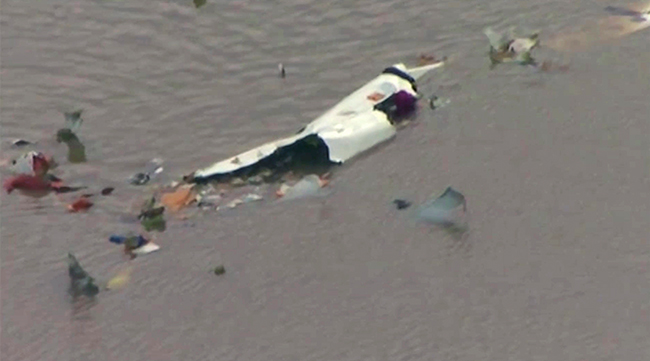 This image taken from video provided by KRIV FOX 26 shows the scene of a cargo plane crash on Feb. 23 in Trinity Bay, just north of Galveston Bay and the Gulf of Mexico in Texas. (KRIV FOX 26 via AP)

The National Transportation Safety Board and other agencies investigating the fatal crash of an Atlas Air cargo 767-300 jet contracted by Amazon Air — Amazon.com’s freight delivery service — are being hampered by difficult conditions at the accident site east of Houston.

Two crew members and a third pilot, who was in the jump seat catching a ride to Houston, died Feb. 23 when Flight 3591 en route from Miami to Houston’s George Bush Intercontinental Airport went down into the shallow waters of Trinity Bay, near Anahuac, Texas, about 40 miles from Houston.

Authorities have recovered all three bodies.

An NTSB “go-team” including Chairman Robert Sumwalt immediately went to the crash scene. The agency is receiving assistance from the FBI and other law enforcement organizations.

“Our entire purpose for being here is to find out what happened so that we don’t have to go through this again,” Sumwalt said at a news conference at the site. “We’re not here to determine the probable cause. We’re not here to speculate. We’re just here to collect the perishable evidence.” 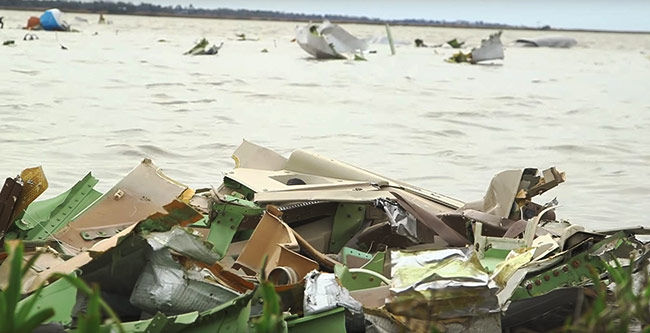 Typically, it takes NTSB more than a year to determine the cause of a transportation accident.

The agency obtained a video taken from a security camera more than a mile away that shows about five seconds of the plane’s final moments. The video has not been made public.

“By looking at the video, I saw no evidence of the aircraft trying to turn or pull up at the last moments,” Sumwalt said.

According to FlightRadar 24, the real-time commercial aircraft flight-tracking service, after flying level at about 6,000 feet, the plane began a sudden drop at 12:38 p.m. It plummeted about 4,500 feet in nine seconds, from 5,800 feet to 1,300 feet. No further position reports were received, and the jet was descending at an estimated 30,000 feet per minute in its final seconds.

“The aircraft was in what I would characterize as a normal descent,” Sumwalt said. “When it got to about 6,300 feet, it then began a very, very rapid descent.”

“The plane was traveling at about 300 knots, or 345 mph, straight down,” William Waldock, an aviation safety expert at Embry-Riddle Aeronautical University in Prescott, Ariz., said in an interview with Transport Topics.

Air-traffic controllers and the pilots on the plane could be heard discussing how to fly around a line of thunderstorms shortly before the crash, according to a recording of radio calls posted on the website LiveATC.net.

There was no distress call from the crew.

Officials said they lost radio and radar contact with the plane around 12:45 p.m. CT.

Investigators say Trinity Bay is muddy, and the 767’s flight data recorders or “black boxes” are likely buried deep in the mud. The data recorders can be tracked using their “pingers,” which emit a loud sound, similar to sonar, but Sumwalt said the mud could be a factor and heavy equipment will be needed to remove debris.

The FBI is asking people who live near the crash site to reach out to officials, especially if they have video or still pictures of the plane before or after the accident.

.@CBSNews reporting that an Atlas Air 767 in Amazon Prime Air livery has crashed on approach to @iah. Flight departed @iflymia. Last @flightradar24 position had it at 1,325 feet over the bay. https://t.co/DLbciBMLBt pic.twitter.com/ZSQvCAlkMw — Jason Rabinowitz (@AirlineFlyer) February 23, 2019

In recent months, TT has reported on Amazon’s expansion of its aviation division to compete with domestic air carriers FedEx Express and UPS Airlines, and several international airlines that carry hundreds of millions of packages each year.

Amazon also has a contract with Air Transport Services Group, which operates another 20 767-300s as part of Amazon’s delivery system

In December, Amazon Air announced it would more than double its presence at Chicago Rockford International Airport, boosting the number of daily cargo flights it operates out of a facility that sits about 90 miles from Chicago and Milwaukee.

Amazon also had selected Fort Worth Alliance Airport in Texas, near Dallas/Fort Worth, to become a regional air hub, with plans to build a facility to handle multiple flights daily.

Amazon also is expanding at its Cincinnati/Northern Kentucky International Airport hub in Covington, Ky. While it currently operates 33 cargo planes out of the facility, in 2018 Amazon announced that by 2027 it plans to have more than 100 aircraft operating there, along with a 3 million-square-foot sorting facility. Amazon Air now is flying to more than 20 domestic destinations.

All of these efforts are designed to help Amazon ensure it has sufficient capacity to deliver its products without relying solely on shippers such as FedEx Corp., UPS Inc. and the U.S. Postal Service.