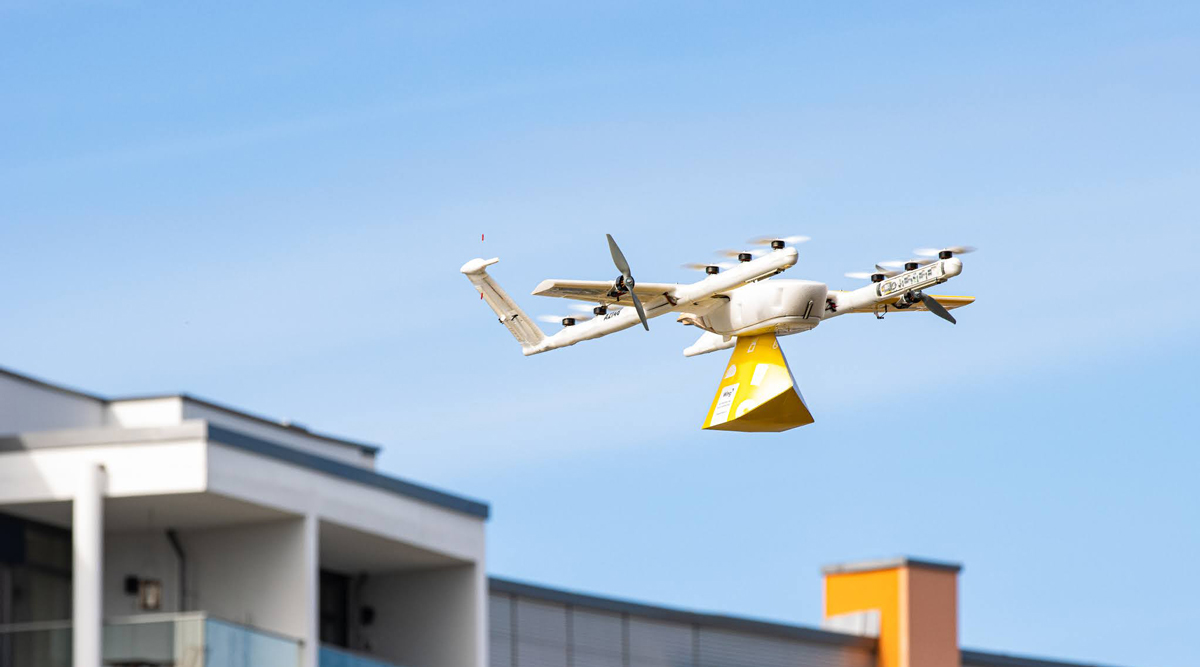 One of Alphabet's Wing drones is photographed in a pilot program in Finland. (Wing)

Alphabet Inc.’s drone-delivery venture, Wing, is releasing free software for U.S. drone users to get permission to fly near sensitive areas such as airports.

The entry of Wing, which is using its corporate cousin Google’s mapping expertise, instantly makes it one of the more significant players in the burgeoning arena of tracking unpiloted aircraft. Starting June 29, Wing’s OpenSky application will be available on Google Play and Apple Inc.’s App Store.

While Wing’s vision of creating a massive drone delivery network is still years away, the new application is a steppingstone toward that goal, which requires well-organized traffic patterns and widespread civilian compliance.

“With nearly 2 million registered drones in the U.S. already, regulatory compliance of all drones will allow them to share the sky safely,” Wing said in a press release. “Moreover, compliance will ultimately expand the uses and benefits of drones — among them emergency response, commercial inspections and contactless delivery — to more people.”

Wing is one of 15 companies that have an agreement with the Federal Aviation Administration to grant drone flight approvals through an agency system known as Low Altitude Authorization and Notification Capability, or LAANC.

Seven of those companies are already offering services to the public, including Airmap Inc., Aloft Technologies Inc. and aerospace giant Airbus SE. Hobbyists from the Academy of Model Aeronautics have a partnership with UASidekick LLC for similar services.

Wing’s OpenSky will allow civilians to get permission to fly near airports or over some densely populated cities, provided other FAA safety rules are followed.

Wing has been testing its automated drone delivery system in Australia, Finland and in rural Virginia.

Existing applications are generally free, but some include fees for additional functions.

The FAA is still in the process of expanding drone uses. It finalized requirements for the devices to broadcast their identity and is working on the framework for allowing them to fly longer distances.