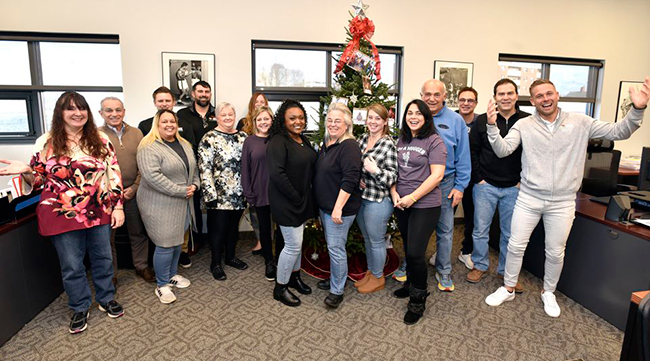 The staff of All States Transport in Springfield have made a large donation to the Toy for Joy campaign. (Don Treeger/The Republican via Tribune Content Agency)

The freight services industry is undergoing constant change, but some things at All States Transport never do.

One is the sense of family within the walls of the trucking company in Springfield, Mass. Another is the company’s commitment to children through the Toy for Joy campaign.

The firm this year bolstered Toy for Joy with a generous $7,500 donation. It’s an inspirational boost to a drive that’s now in its historic 100th year.

“This [ability to contribute] is the result of a lot of hard work by a lot of people,” said owner William “Billy” Kingston, whose firm employs 20 people in Springfield and two in its office in Miami.

All of the staff, including those in the smaller Miami office, are part of All States’ annual contribution — which has more than tripled in the last few years. “It’s the AST family. It’s just what we are,” he said.

“Bill Kingston reached out several weeks before we even launched this year’s campaign to let us know his team would be remembering Toy for Joy again this year,” said Cynthia Simison, executive editor of The Republican. “Little did we know there would be a gift this significant. All States and the Kingston family truly wowed our Toy for Joy team with their generosity.”

Simison said All States is among the region’s many organizations that have established long-standing support for Toy for Joy. “With 100 years of history, I think people know they can trust Toy for Joy to ensure their contributions reach families in need,” she said.

Kingston said he’s proud of a company team that has taken on the many challenges the trucking industry faces today.

“Overall, the year here has been very good. It’s slowed a bit in the last three months, which reflects the economy,” Kingston said.

“People want their freight shipped today and delivered yesterday,” he said with a smile. “The industry has changed so much, even in the past four or five months. Internationally, it’s actually become a little better, as prices have gone down.”While the company donates to various charitable causes, he says that among them, Toy for Joy is special.

“The phrase about the importance of giving back may seem overused, but it’s so critical. That’s especially true, given what people have gone through in the past three years — a pandemic, uncertainty, inflation, political issues and the pressure people are under constantly.

“Who pays for it? Often, it’s the children, who have had nothing to do with it,” Kingston said.

“We are so pleased to be able to contribute and support the children in our region,” he said.

In an industry that has a high failure rate among startups, All-State Transport will celebrate its 38th year in business in April. “All in Springfield,” Kingston says proudly. This year marks the centennial of the Toy for Joy campaign. Over the course of its 100 years, the program has provided thousands of children in Western Massachusetts toys and books through the generosity of the region’s residents, school children, civic groups, businesses and others.

Toy for Joy is a collaborative effort by the Salvation Army with The Republican, El Pueblo Latino and MassLive, along with media partners at Reminders Publishing and The Westfield News. Salvation Army units in Springfield, Holyoke and Greenfield distribute toys and books to families in Hampden, Hampshire and Franklin counties. Toy for Joy serves children age 16 and younger.