Advances in Autonomous Trucking Stand Out at CES 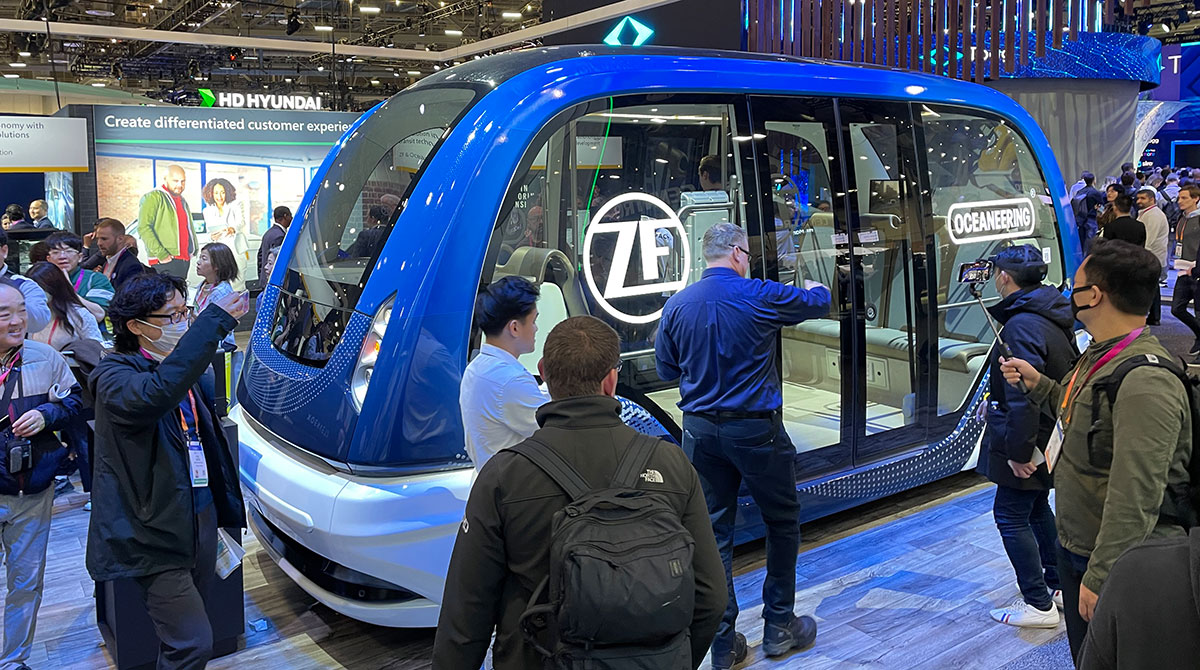 ZF Group unveiled a driverless passenger shuttle that it plans to bring to the U.S market through a partnership with Beep Inc. (Seth Clevenger/Transport Topics)

LAS VEGAS — Advances in the development of autonomous trucks highlighted a heavy focus on commercial vehicles and supply chain technologies at CES 2023.

Developers such as Waabi, Waymo, Aurora, Gatik, Plus and Kodiak Robotics showcased their automated driving systems, met with attendees and participated in panel discussions at the massive annual technology expo, held Jan. 5-8.

Other freight transportation and logistics trends at the show included investments in e-commerce fulfillment technology and the rollout of electric-powered trucks.

The extensive presence of self-driving truck exhibits at CES illustrated how autonomous vehicle technology — once focused predominantly on passenger cars and ride-hailing services — has increasingly shifted toward commercial and industrial applications in recent years.

Waymo showcased a Freightliner Cascadia outfitted with the Waymo Driver alongside its self-driving passenger vehicles at CES 2023. (Seth Clevenger/Transport Topics)

“I think there’s more understanding that for self-driving, commercial vehicles are where it’s going to happen first at scale,” said Raquel Urtasun, CEO and founder of self-driving truck startup Waabi. 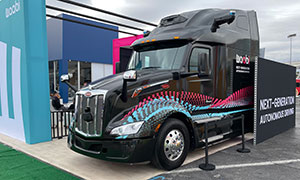 Waabi, a new player in the autonomous truck space, exhibited its autonomous driving technology for the first time at CES. The company showcased a Peterbilt tractor outfitted with the Waabi Driver — its software, computing hardware and sensor suite that enable autonomous driving.

A short distance away, Waymo exhibited its full lineup of self-driving vehicles, including a Freightliner Cascadia tractor outfitted with the latest generation of the Waymo Driver. The autonomous vehicle pioneer also showcased self-driving passenger cars going back to its original Firefly prototype developed while the company was still the Google Self-Driving Car Project.

Elsewhere at CES, Gatik showcased one of its fully autonomous box trucks designed for shorthaul operations, while Plus offered a look at the next generation of its PlusDrive driver-assist technology on an International tractor.

Despite recent pessimism about autonomous vehicle technology expressed by some analysts and investors, self-driving truck developers at CES emphasized their progress toward commercialization. 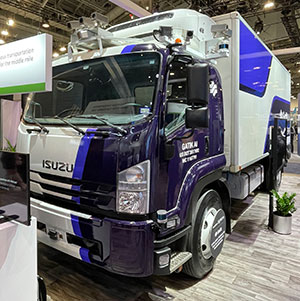 “We feel more optimistic than ever,” said Don Burnette, founder and CEO of Kodiak Robotics. “We have accomplished more in the last year than we ever thought we could.”

Burnette acknowledged a certain amount of skepticism toward autonomous driving among outside observers, but cited growing interest within the trucking industry.

“Among industry folks, I think there’s higher levels of acceptance than there was before,” he said. “Maybe externally in the media or in the investment community, etc. , you’re seeing some negativity, but our investors are super excited.”

“For the customers, a few years ago it was a question of do I really want or need this technology,” she said. “Today it’s all about when can you actually deliver the technology. … That’s a big switch.”

Manufacturers and industry suppliers also had a significant presence at CES. 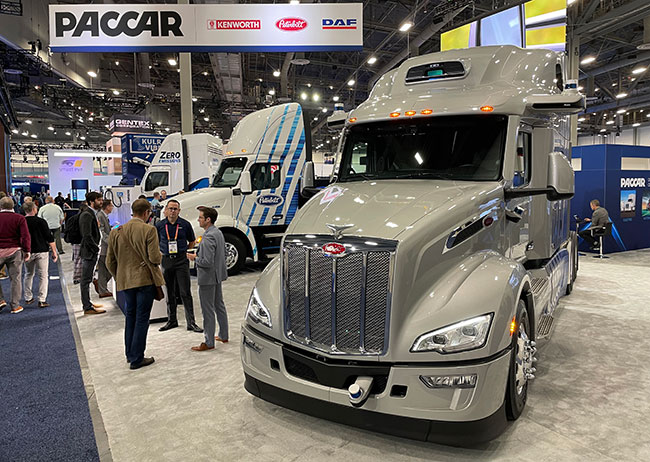 The expansion of automotive and commercial vehicle technologies on display at CES in recent years illustrate how the show has expanded well beyond its original focus on consumer electronics.

“It’s not just consumers who are attending the show. We have customers who are attending the show,” said Peterbilt General Manager Jason Skoog. “It’s just a good environment to see your customers and suppliers and see what else is going on in the rest of the tech world. There are a lot of things I see as I walk through these halls and I think to myself, ‘Oh yeah, maybe that belongs on a truck someday.’ ” 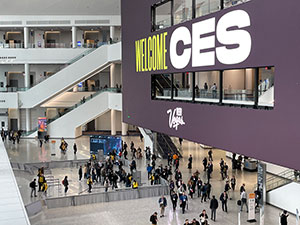 Industry supplier ZF Group introduced a range of new hardware and software systems to support the shift toward automated driving and electric vehicles.

At a Jan. 4 press conference, ZF announced a new “multi-domain” version of its ProAI computer to enable functions such as advanced driver-assist systems and infotainment as vehicle manufacturers shift toward domain and zonal architectures for vehicle electronics.

“Autonomy is coming. E-mobility is coming. It’s software driven, and ZF is ready with hardware, software and system solutions,” said Martin Fischer, a member of ZF’s board of management responsible for safety systems and electronics in the Americas.

ZF unveiled its next-generation driverless shuttle while another automotive company, Benteler Group, introduced its own autonomous people mover under the Holon brand.