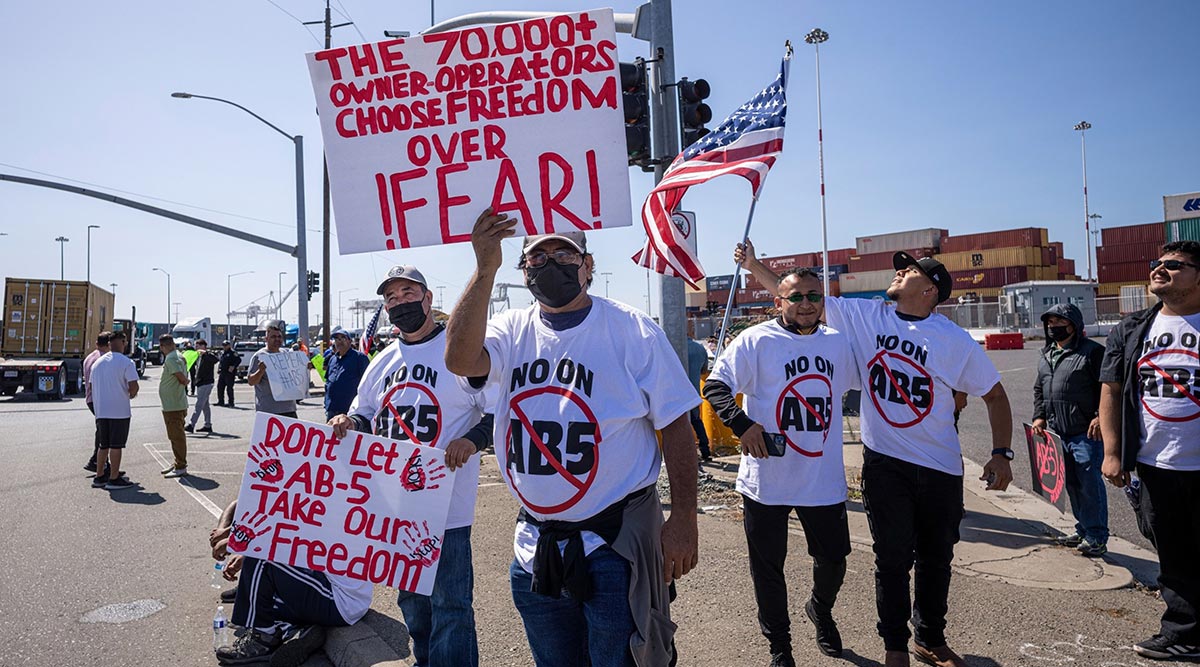 California’s third-busiest port, the Port of Oakland, shut down some of its gates and marine terminals for a third day July 20 as truckers protesting the AB 5 gig-work law that could take 70,000 drivers off the road blocked access to the operation.

Management at the Oakland International Container Terminal decided to close operations due to the independent trucker protest, and the port’s three other marine terminals are effectively shut down for trucks, port spokesman Robert Bernardo said. Some vessel-labor operations are underway.

SSA Marine Inc., the largest terminal operator at Oakland, shut down all operations for the day July 19, he said.

Protests began across California last week after the Supreme Court on June 30 refused to review a case brought by the California Trucking Association challenging the application of Assembly Bill 5 to truckers. The law, passed in 2019, requires workers satisfy a three-part test to be considered independent contractors, or else be seen as employees entitled to job benefits. About 70,000 truck owner-operators in the state must now comply with the law.

The trucking industry relies on contractors — who until now have had flexibility to operate on their own terms — and has fought to be exempt from state regulations for years.

“Ongoing protests will only drive Oakland customers away and encourage them to take their business to other seaports,” Bernardo said. “They need to take their message to Sacramento.”

After ranking as the fourth-busiest hub in the U.S. just a few years ago, the Port of Oakland now barely cracks the top 10. Container traffic fell for three straight months through May on an annual basis as bottlenecks mount.

Import dwell time is rising at the fastest pace on the West Coast, with containers now sitting at terminal for an average of 17.5 days, up from 12.4 last week, according to supply chain data provider project44.

When faced with the demonstration outside of the ports, some dockworkers chose not to enter the terminal, Bernardo said.

The guiding principles of their labor organization — the International Longshore and Warehouse Union — state that “every picket line must be respected as if it were our own.”

The ILWU contract that lapsed at the start of the month established union members have a right to refuse to cross legitimate and bona fide picket lines without being in violation of their labor duties.

The ILWU is currently negotiating a new contract for 22,000 dockworkers across 29 West Coast ports with the Pacific Maritime Association, which represents more than 70 employers. Discussions for a new agreement started on May 10 in San Francisco, and the most recent accord expired on July 1.