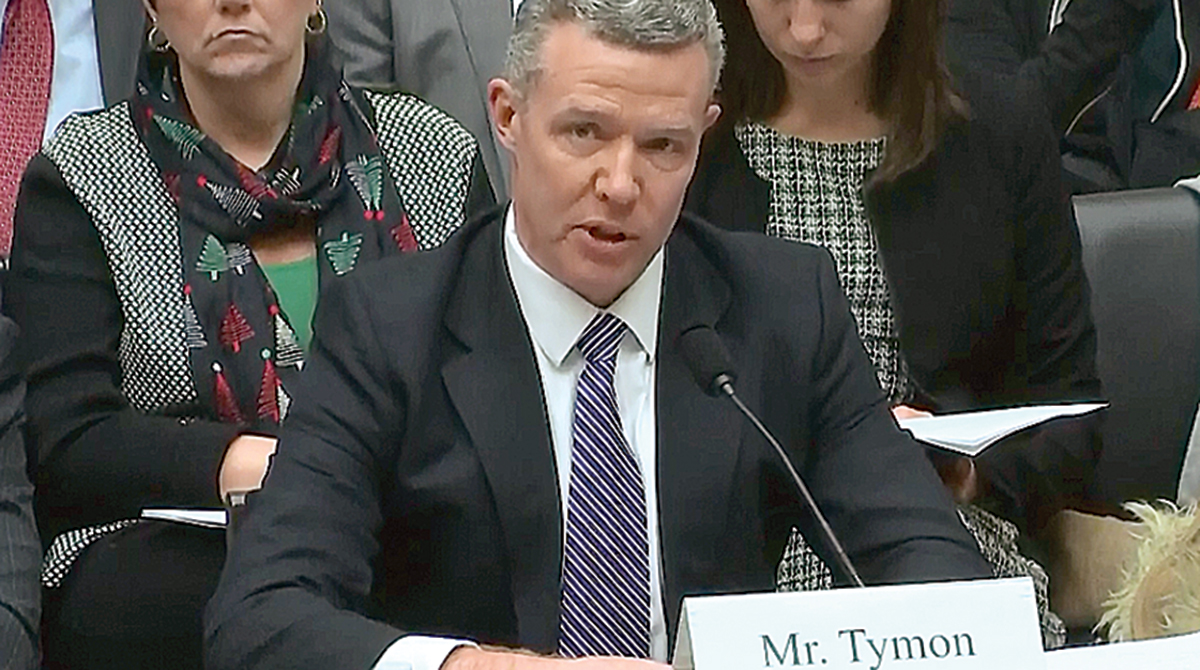 Tymon testifies in front of Congress at a past hearing. (House Transportation & Infrastructure Committee via YouTube)

Congressional approval of a multiyear highway policy measure would enhance state transportation agencies’ ability to plan long-term for infrastructure projects. That is the message from the organization representing the country’s departments of transportation.

Jim Tymon, executive director of the American Association of State Highway and Transportation Officials, pressed federal lawmakers to clear a $1 trillion Senate-passed infrastructure bill. Included in that measure is a five-year reauthorization of a 2015 highway policy law.

House Democratic leaders have signaled the potential for voting on the infrastructure legislation as early as this week. To prevent funding disruptions, Congress extended the highway law’s authority through Dec. 3.

“It’s hard to go out there and commit to a project that’s going to take two or three years to build. That’s why it’s so important for Congress to get a long-term infrastructure bill done that provides states and localities with five or six years of funding predictability. This way they can take on those large projects that the American people want us to be able to take on,” Tymon said on C-SPAN on Nov. 2.

Reacting to the federal highway law’s short-term extension, the group said: “AASHTO members need certainty to plan transportation projects to meet the needs of their communities and keep our economy moving, and the impact of these short-term extensions is not insignificant. Congress must pass the [Infrastructure Investment and Jobs Act] immediately to lessen the harmful impacts that come from the lack of a long-term surface transportation bill.”

The group is not alone in urging Congress to act. American Trucking Associations is among a plethora of stakeholders urging federal lawmakers to advance the multiyear infrastructure package. During ATA’s recent annual conference, ATA President Chris Spear pressed the point: “This is historic; the largest infusion of federal funding into our nation’s bridge network since the creation of the Interstate Highway System. And it gives states the certainty and ability to plan, not just patch, building new projects over the course of several years that address our nation’s top freight bottlenecks.”

Alongside the infrastructure funding measure, House Democratic leaders say they intend to consider a nearly $2 trillion social infrastructure budget package. Both bills reflect significant aspects of President Joe Biden’s Build Back Better proposals on climate change and the social safety net. If passed by the House, the Senate would consider the budget measure via a fast-track reconciliation process.

On Nov. 4 the House appeared poised to vote on both the infrastructure legislative package and the bigger economic plan on Nov. 5. On Nov. 3, Speaker Nancy Pelosi (D-Calif.) reiterated her plan to schedule votes on the physical and social infrastructure bills. “It had been my intention throughout this process to put on the House floor and pass a bill that would pass the Senate in the same form.”

Pelosi continued, “Because I have been informed by a senator of opposition to a few of the priorities contained in our bill and because we must have legislation agreed to by the House and the Senate in the final version of the Build Back Better [budget] Act that we will send to the president’s desk, we must strive to find common ground in the legislation.”

Her statement came a day after her party was defeated in Virginia’s gubernatorial contest. In the New Jersey governor’s race, the Democratic incumbent was re-elected.

Congressional GOP leaders, opposed to the majority party’s Build Back Better agenda, offered a post-election analysis. Republican Leader Mitch McConnell of Kentucky argued, “This radical social takeover is the last thing Americans need and the last thing Americans want. The voters of America just gave our colleagues a preview of that fact last night. They should pull back from the brink while they can.”

In the meantime, Democrats’ intraparty negotiations in the Senate carry on. At a press conference on Nov. 1, Sen. Joe Manchin (D-W.Va.) expressed concerns about the budget bill’s source of funding. He pointed to the need for a Congressional Budget Office cost estimate. The senator affirmed, “I will not support the [budget] reconciliation legislation without knowing how the bill would impact our debt, and our economy, and our country. And we won’t know that until we work through the text.”

The White House responded to Manchin’s predication. Press Secretary Jen Psaki stated, “Sen. Manchin says he is prepared to support a Build Back Better plan that combats inflation, is fiscally responsible and will create jobs. The plan the House is finalizing meets those tests: It is fully paid for, will reduce the deficit and brings down costs for health care, child care, elder care and housing.”

She went on, “Experts agree: 17 Nobel Prize-winning economists have said it will reduce inflation. As a result, we remain confident that the plan will gain Sen. Manchin’s support.”

US Recovers Millions in Ransom From Colonial Pipeline Hackers