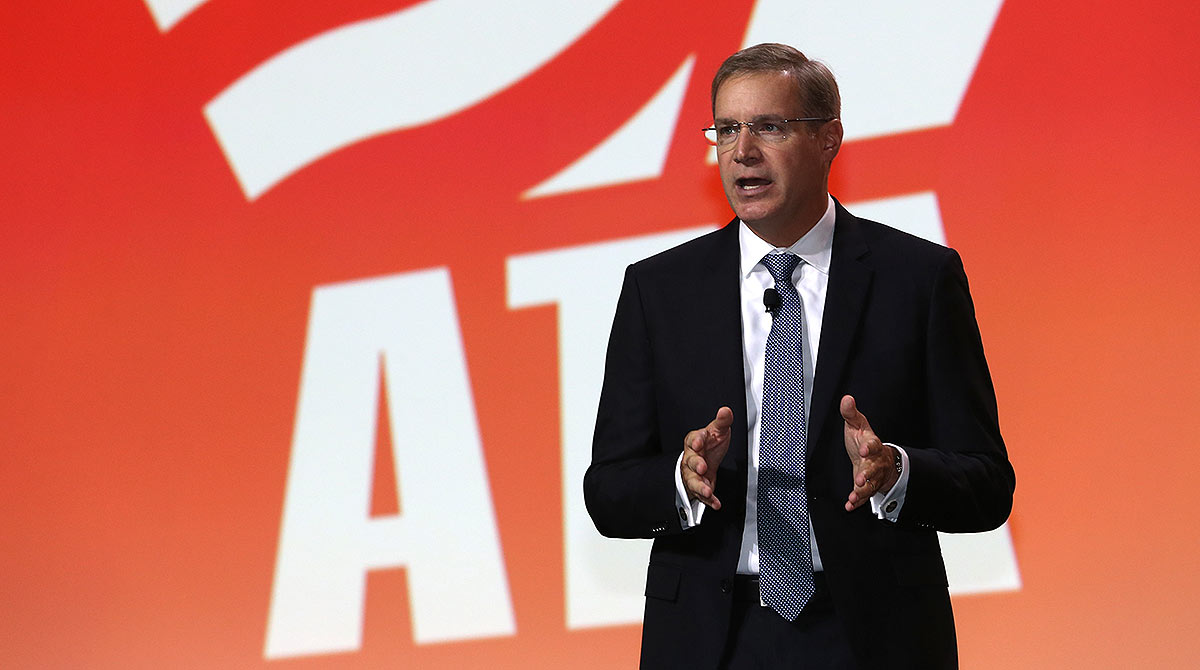 NASHVILLE, Tenn. — The leader of American Trucking Associations during his annual state-of-the-industry address praised truck drivers’ essential role in ensuring the movement of goods across the nation as the transportation industry grapples with supply chain bottlenecks at the ports that are making national headlines.

“The weight placed on the supply chain expands well beyond our shores, where container displacement, weeks of backlog as ships wait to be unloaded, chassis and chronic worker shortages, layered with pipeline hacks, a shrinking supply of chips and sensors, natural disasters and, of course, COVID itself,” said ATA President Chris Spear during the address, delivered Oct. 25 during the federation’s annual Management Conference & Exhibition.“It makes one question, ‘How much more weight can the supply chain withstand before it starts to crack or even crumble?’ That’s why being at the table matters.”

For trucking, being at the table has meant multiple trips to Capitol Hill to stress to lawmakers working on a $1 trillion infrastructure package the importance of trucking to the nation’s economy. The legislation has been approved by the Senate.

“Despite the odds, the Infrastructure Investment and Jobs Act is an example of what’s possible when we tell our story,” Spear said. “In this case, we told it many times, to countless people and for a mighty long time. In the House and Senate, ATA testified 24 times over the last five years — pretty sure that’s a record — and held countless [advocacy] ‘Calls on Washington’ on Capitol Hill, where our members walked the halls, knocked on doors and made an ask. Talk about your voice being heard,” said Spear, as audience members applauded his remarks.

Per analysis from ATA, Spear affirmed the federal infrastructure bill would provide a 38% increase in funding for surface transportation systems, as well as bridges, over the next five years. That would amount to $477 billion in new funding, including $347.5 billion for highways and $37 billion for bridges.

After months of negotiation, congressional Democratic leaders have suggested the Senate-passed funding bill is likely to be considered in the U.S. House of Representatives as early as this week.

Specific to trucking, Spear highlighted potential future workforce investments, an apprenticeship for younger drivers to operate Class 8 trucks across state lines, and establishing a Women in Trucking Advisory Board at the Federal Motor Carrier Safety Administration.

Spear noted, “This is historic; the largest infusion of federal funding into our nation’s bridge network since the creation of the Interstate Highway System. And it gives states the certainty and ability to plan, not just patch, building new projects over the course of several years that address our nation’s top freight bottlenecks.”

He continued, “It took time and patience educating and building support on both sides of the aisle, but passing this bill is another textbook example of how ATA advocacy is shaping our industry and delivering value for our members.”

“Throughout this pandemic, truckers proved how we make a difference. You’re among an elite list of professionals that include scientists, first responders & healthcare providers.” #ATAmce21 pic.twitter.com/t8kOo7VCxU

U.S. House Speaker Nancy Pelosi (D-Calif.) told CNN’s “State of the Union” on Oct. 24 that her chamber is close to advancing the measure. “I have said already we have 90% of the bill agreed to and written,” she said. “We just have some of the last decisions to be made.”

Included in the Senate infrastructure bill are provisions from the Developing Responsible Individuals for a Vibrant Economy, or DRIVE Safe Act. Sponsored by Sen. Todd Young (R-Ind.), the bill seeks to boost training via an apprenticeship for drivers younger than 21 so they may operate trucks across state lines. The legislation responds to an industrywide shortage of truck drivers.

Spear in his address also acknowledged commercial drivers who worked to provide economic stability during the pandemic. Stakeholders and public officials have touted truckers for delivering to supermarkets and hospitals as a nation was asked to stay at home during the early months of COVID-19.

As he put it, “Throughout this pandemic, truckers proved how we make a difference. There was no playbook. Yet our drivers are once again this industry’s most valuable players. You’re among an elite list of professionals that include scientists, first responders and health care providers. When many in this nation sheltered in place, you maintained composure and answered the call.”

Where Trucking Stands on Environmental Sustainability