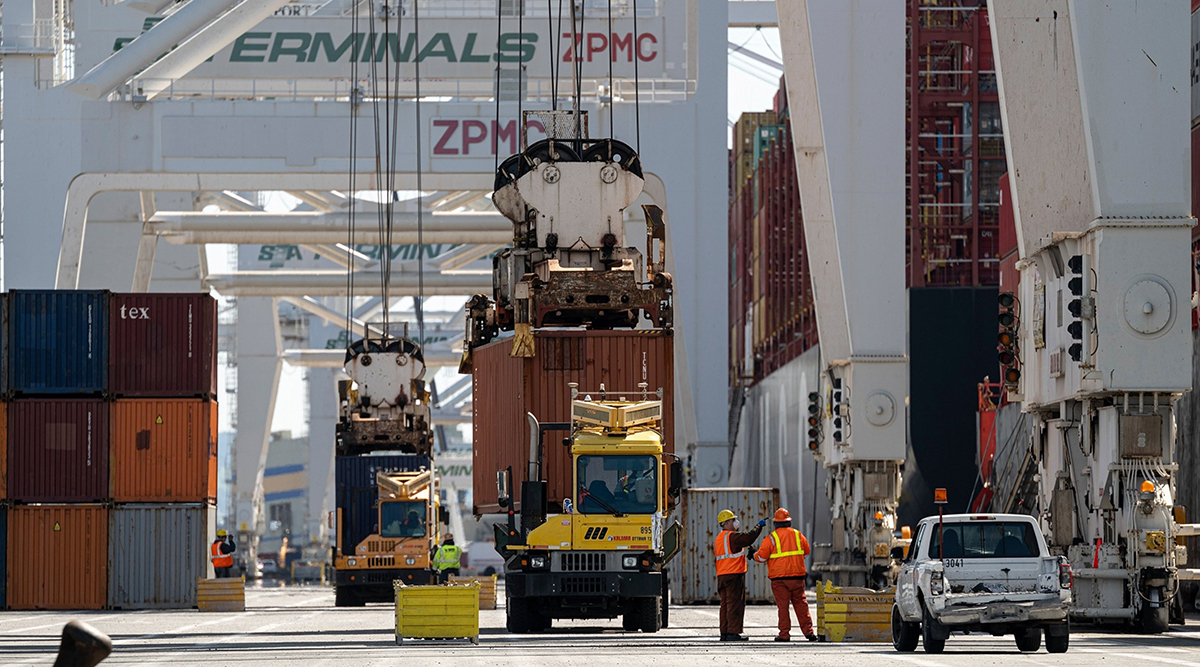 Workers at the Port of Oakland. (David Paul Morris/Bloomberg News)

The union representing about 22,000 West Coast dockworkers and their employers will continue negotiations for a new labor contract past the July 1 expiration of their current pact and said the ports — among them the U.S.’s busiest — will keep functioning.

“While there will be no contract extension, cargo will keep moving, and normal operations will continue at the ports until an agreement can be reached between the Pacific Maritime Association and the International Longshore and Warehouse Union,” the parties said in a joint statement July 1.

The ILWU and the more than 70 employers represented by the PMA started talks May 10 to work out a new contract for longshoremen across 29 ports in California, Oregon and Washington. While the current agreement was to end July 1 at 5 p.m. local time, the groups had recently said they were unlikely to reach a deal before then and had reaffirmed neither party was preparing for a strike or lockout. Talks often go past the expiration.

“Both sides understand the strategic importance of the ports to the local, regional and U.S. economies, and are mindful of the need to finalize a new coast-wide contract as soon as possible to ensure continuing confidence in the West Coast,” the ILWU and PMA said.

The ports handle just under half of the containers entering and leaving the U.S. and are the principal gateway for shipments to and from China, the biggest source of American merchandise imports — illustrating the high-stakes nature of the negotiations.

Last November, the ILWU declined an offer by the PMA to extend the current contract until July 2023. The current pact was originally set to end in 2019, but was lengthened after roughly two-thirds of union members voted to do so in exchange for higher wages and pensions.

This time around, the negotiations are drawing attention because the nation’s largest trade hubs — the ports of Los Angeles and Long Beach — are struggling to clear pandemic-era congestion.

The economic stakes are high: July and August are typically busy months for imports from Asia as retailers stock up on back-to-school and holiday goods. The peak has arrived even earlier this year, with companies looking to pre-empt future disruptions by ordering these products even further ahead of time.

Earlier July 1, a coalition of 150 trade groups led by the National Retail Federation said the White House should work with the parties to extend the current contract until a final deal is reached, ensure commitments to remain at the negotiating table and not engage in any kind of activity that leads to further disruption at the ports.