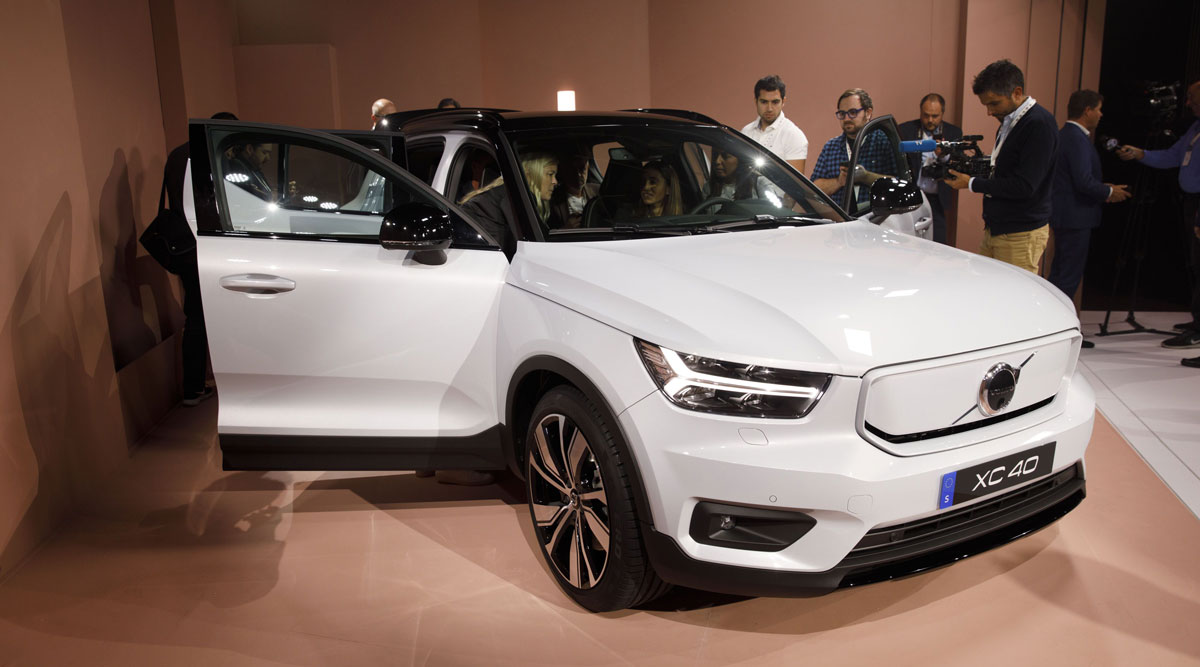 The Volvo XC40 Recharge electric SUV is displayed during an event in Los Angeles in October 2019. (Patrick T. Fallon/Bloomberg News)

Volvo Car AB is counting on tripling sales of plug-in hybrid models this year as a way to avoid paying what could amount to hundreds of millions of euros in European penalties for the sale of its more polluting yet popular combustion-engine SUVs.

A fifth of all new Volvos sold in 2020 should be plug-ins or all-electric, compared with just 6.5% of the total last year, according to Chief Executive Officer Hakan Samuelsson. That would see hybrid sales rising to more than 150,000 based on the pace of growth in 2019. The company is only planning to start shipping its first fully-electric model — the XC40 Recharge — later this year.

The stakes are high for Volvo’s electric strategy because conventional SUVs made up more than half of sales last year and are largely behind the carmaker’s success since the takeover by China’s Zhejiang Geely Holding Group Co. a decade ago. As Europe’s tough emissions rules kick in, the company could pay dearly. PA Consulting Group puts Volvo’s potential fines for this year at a quarter of annual operating profit.

“Paying fines is something that just shouldn’t be in the equation,” Samuelsson said in an interview at the company’s headquarters in Gothenburg, Sweden. “That’s not part of our plans. We want to invest in product development, not in fines to Brussels.”

The CEO pointed to Volvo’s goal for half of all cars sold in 2025 to be all-electric and the rest plug-in hybrids. It will relaunch its battery-powered range under the “Recharge” moniker, and while the volume of the electric XC40 will be modest this year, Volvo has the capacity to produce “tens of thousands” next year, he said.

The question for Volvo and other conventional manufacturers selling cars in the EU is whether consumers will buy into the plans. Rival automakers including Daimler AG’s Mercedes-Benz, BMW AG and Volkswagen AG’s Audi also are rolling out battery-powered models. The threat of penalities for the companies, dubbed “the 2020 CO2 cliff” by Evercore IS auto analyst Arndt Ellinghorst, comes at a tricky time, when the region’s market is expected to shrink.

PA Consulting Group earlier this month warned that the EU could inflict 14.5 billion euros ($16.1 billion) in fines on the region’s 13 largest carmakers for surpassing carbon-dioxide targets. The penalties will be calculated on the basis of the average emissions of new car registrations. For Volvo, they could reach 382 million euros by 2021, based on the assumption that only 14% of its sales will be all electric or plug-in hybrids, the consultancy said.

Volvo’s bet on plug-ins comes despite criticism of the technology for being a half-measure that doesn’t go far enough in reducing emissions, especially as some users run them on fossil fuels without charging the battery. European sales dropped in the first nine months of last year, but according to a report by BloombergNEF are expected to rise quickly this year due to new models on the market and the emissions crackdown.

Volvo’s own studies indicate its plug-ins run on battery 40% to 50% of the time. The company plans to promote recharging by paying owners’ electricity costs.

“We don’t feel that there’s any reason to feel guilty about plug-in hybrids,” Samuelsson said. “Plug-ins are necessary for the transition, but it’s also a more long-term solution for those who may not have adequate access to charging.”