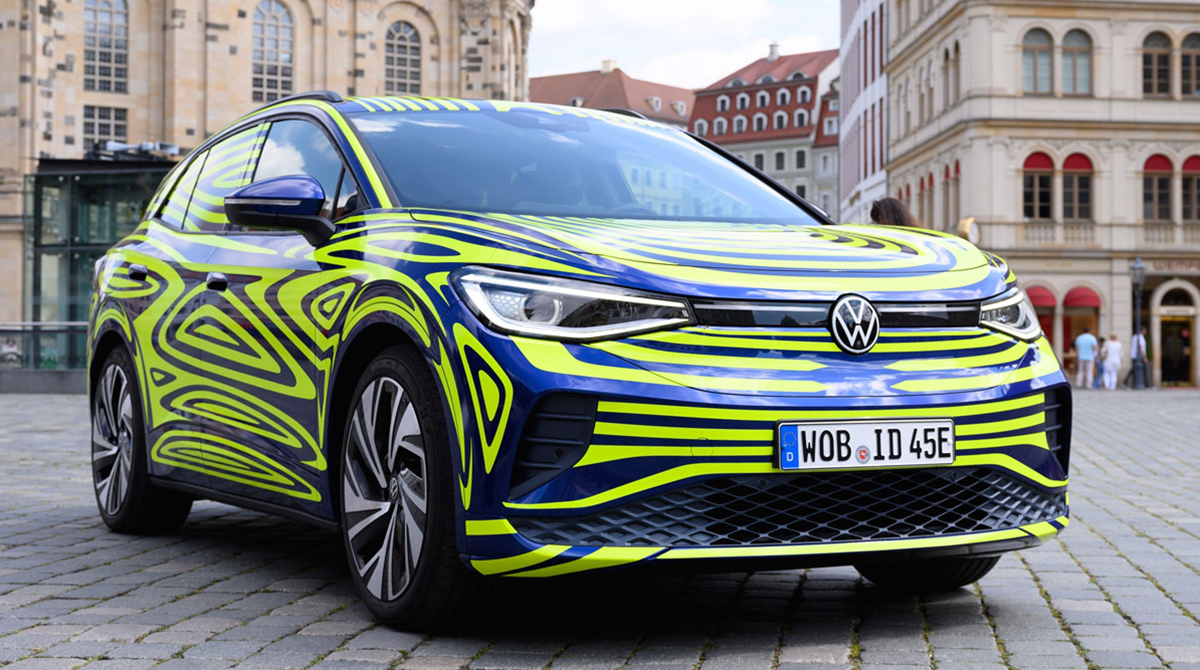 A VW ID.4 stands in a street during a presentation in Germany in July 2020. (Sebastian Kahnert/dpa via AP)

Volkswagen AG’s main brand doubled its forecast for the share of purely battery-powered cars in Europe to 70% by the end of the decade, signaling it expects to be delivering well more than 1 million EVs a year by then.

While the goal is less extreme than Volvo Cars and Jaguar’s goals to go electric-only in the same time frame, they are far smaller than VW’s namesake unit, which is Europe’s biggest selling brand.

Elsewhere, VW’s EV sales will surge too. Electric cars will make up more than 50% of sales in China and the U.S. by 2030, VW said in a statement March 5.

UBS study: #Volkswagen on the road to being the joint world leader for electric cars as early as 2022! #eMobility

“We’re increasing the pace, and there’ll be more change at Volkswagen in the next few years than ever before,” VW brand chief Ralf Brandstaetter said.

VW’s new target comes amid rising sales of electric cars that saw Europe pass China last year as the world’s biggest EV region. The developments have triggered a number of carmakers to switch gears. Volvo Cars this month said it accelerated a plan to quit selling combustion cars altogether by 2030. And Ford Motor Co. recently announced the same for its passenger car brand in Europe.

While transforming into an EV maker, the brand still will deliver an operating profit margin of at least 6% as of 2023, even as battery cars generate slimmer returns and the company steps up the pace on investments in electrification and digital services.

It plans to return to profitability in the U.S. and South America this year after long-standing losses. High costs compared with rivals have long irked investors, and VW targets a fixed cost reduction of 5% by 2023 and lowering material expenses by 7%.

The transformation of the marque is key for Europe’s largest automaker as it accounts for about half of global deliveries. Its profitability trails other mass-market rivals as it is saddled with significant development costs for components used by other VW group brands. PSA Group divisions were the envy of the industry before the French manufacturer combined with Fiat Chrysler to form Stellantis NV earlier this year.

VW brand had a negative return on sales after the first nine months last year with an operating loss of 1 billion euros ($1.2 billion) as the pandemic shut factories and cut sales. In 2019, the margin was 4.3%.

VW’s rollout of electric cars is gaining steam. The ID.3 hatchback, the first vehicle from its dedicated EV compact-car platform, went on sale in 2020. It will be followed by the all-wheel drive ID.4 SUV and the ID.5 crossover this year. The seven-seater ID.6 X will go on sale in China in the fall. Plans for a smaller EV below the ID.3 priced at around 20,000 euros have been pulled forward by two years to 2025.

VW’s electric transformation got a boost this week when UBS Group AG analysts said the ID.3 and VW’s EV platform was competitive with Tesla Inc. on key metrics including cost, energy density and efficiency. All electric cars from the VW brand will have “a positive margin” from the start, Brandstaetter said.

Among the broad electric shift, key models such as the Golf, Tiguan and Passat will get a combustion-car successor to help finance the move toward EVs. Other models face being weeded out. The iconic Beetle or former best sellers like the Passat sedan already have been axed to free up funds. There are also no plans to build a successor for the Touran minivan and potentially other models, Brandstaetter said.

The brand is investing about 16 billion euros in areas including electric mobility and digitization through 2025. It will start over-the-air updates every 12 weeks starting this summer with a plan for a fleet of more than 500,000 fully connected cars on the road in two years.