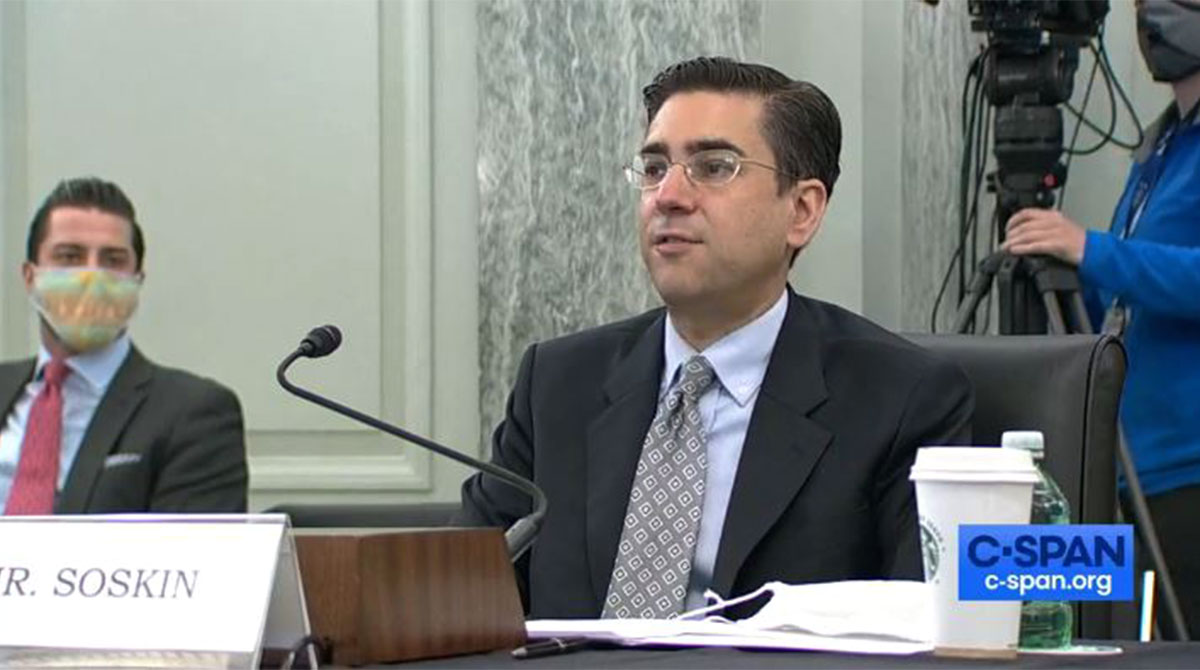 Soskin speaks at the hearing. (Screenshot via C-SPAN)

President Donald Trump’s nominee to lead the U.S. Department of Transportation’s internal watchdog division told senators that if confirmed he would pursue investigations without bias.

“We will investigate all allegations and issues without fear or favor and without regard to whether it involves a political nominee or not. The public is entitled to have oversight of everyone in the Department of Transportation, including political appointees,” Eric Soskin, the nominee to become the department’s inspector general, told the Commerce Committee on Aug. 6.

Soskin added that his interagency experience has helped him to “recognize the critical role of the inspector general in each agency in combating waste, fraud and abuse, and advancing efficiency and effectiveness in the delivery of government programs.”

“An IG should be, like me, a leader passionate about upholding public confidence in our federal institutions and sustaining our democracy by ensuring accountability and thereby delivering the results the public expects from their government,” he explained.

The nominee had told the lawmakers that among the challenges he anticipates to encounter within the next 10 years include “ensuring the safety of transformative technologies within the purview of DOT, including unmanned and autonomous vehicles, private access to space and other transportation technologies to ensure their embrace by the public.”

“For these to unleash their full potential to provide economic opportunity to hundreds of millions of Americans, we must strike the right balance between establishing safety — and, as importantly, the perception of safety — to ensure the business and consumer confidence needed for widespread adoption and to enable a diversity of new business models, while also creating an environment in which innovation can flourish,” he wrote in responses to a questionnaire from the committee.

Soskin’s experience includes being a senior trial counsel for the Department of Justice in the federal programs branch since 2006, according to background the White House posted online.

Washington Sen. Maria Cantwell, the committee’s top Democrat, had pressed Soskin about the inspector general’s role. She noted activities during Trump’s tenure have made her “very concerned about various positions in the administration that I think are overly, overly political.”

Approval in committee would advance his nomination to the Senate floor. If confirmed, he would succeed acting Inspector General Howard “Skip” Elliott.

Earlier this year, top Democrats in the U.S. House of Representatives criticized Elliott’s role as inspector general, primarily due to his other role as administrator of the Pipeline and Hazardous Materials Safety Administration.

“Your dual appointment could severely chill whistleblower disclosures to the Office of Inspector General because whistleblowers might fear that their identities could become known to an official still serving in the department. It also may chill communication within the Office of Inspector General if auditors or investigators are concerned that you will share information with Secretary [Elaine] Chao before it is appropriate,” wrote Reps. Carolyn Maloney of New York, Peter DeFazio of Oregon, and Gerry Connolly of Virginia, the chairpersons of the Oversight and Reform, Transportation and Infrastructure, and Government Operations panels.

The Commerce Committee also heard from Robert Primus, a nominee to sit on the Surface Transportation Board, as well as Chris Koos and Sarah Feinberg to be directors on the board of Amtrak.

Some States Slow to Transmit Driver Convictions to Regulators