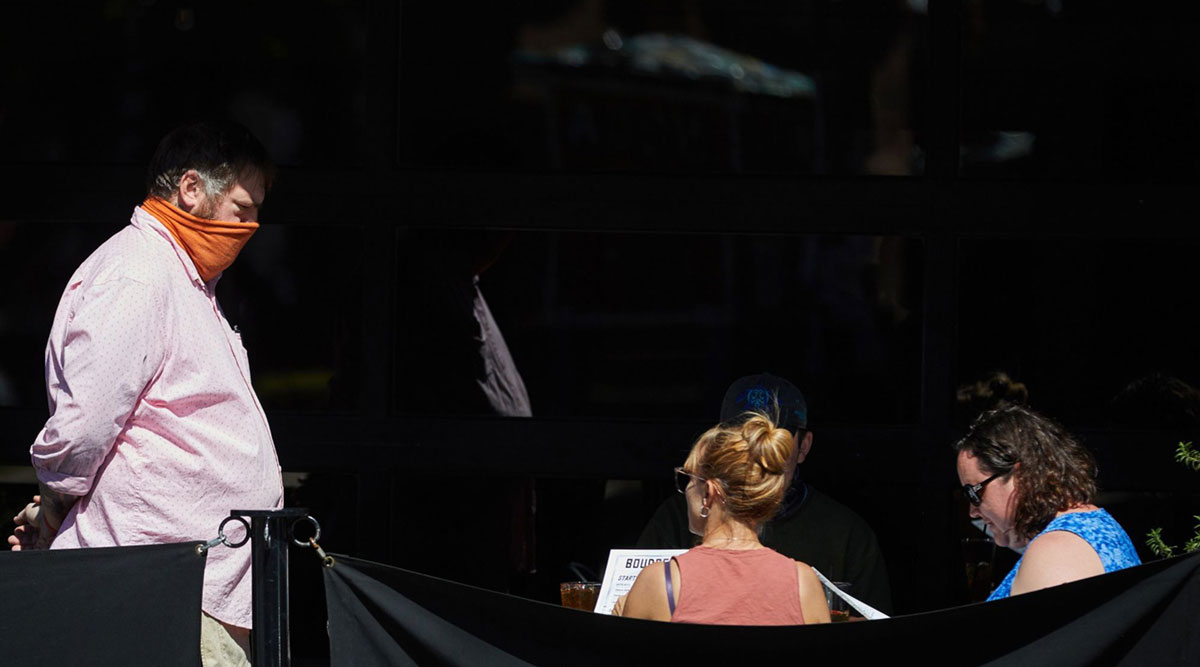 A worker assists diners at a restaurant in Charlotte, N.C. (Logan Cyrus/Bloomberg News)

U.S. job gains slowed in September and many Americans quit looking for work, suggesting the economic recovery is downshifting as the country struggles without a COVID-19 vaccine or fresh government aid.

Nonfarm payrolls increased by 661,000 following an upwardly revised 1.49 million advance in August, according to data Oct. 2 from the Labor Department. That compared with the median estimate of economists for a gain of 859,000.

The unemployment rate fell by more than forecast, dropping 0.5 percentage point to 7.9%, though the labor-force participation rate declined by 0.3 point to 61.4%, with declines particularly pronounced among women.

The report, the last before November’s presidential election, reflects a sizable decline in local education jobs, while gains in retail and temporary workers slowed. What’s more, persistently high jobless claims, along with this week’s announcements of tens of thousands of layoffs, also indicate widespread economic pain.

Lawmakers remain at odds over further stimulus to help jobless Americans and small businesses, though the latest numbers could add pressure to agree on a package.

“A drop in participation is unequivocally bad for the labor market outlook,” said Sarah House, senior economist at Wells Fargo & Co. “It has the potential to prolong the overall recovery as workers are more disengaged with the labor market.”

Also, weak gains in average hourly earnings — which rose a less-than-expected 0.1% in September from the prior month — is “another land mine for the spending of consumers going forward given overall slower job growth” and fading fiscal support, she said. 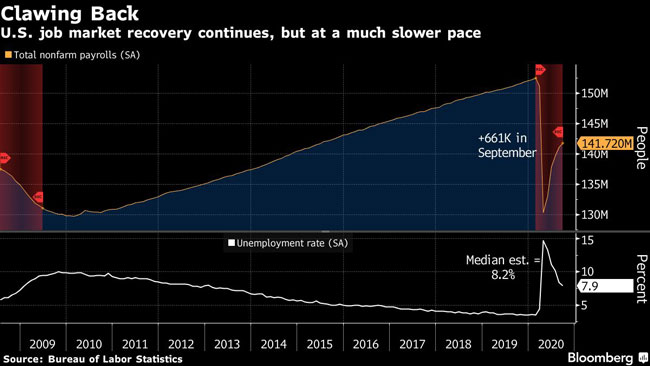 With just a month left before the election, the jobs data is being closely watched, though the contest was scrambled earlier Oct. 2 by news of President Donald Trump’s positive test for the coronavirus. The relatively strong rebound in jobs in prior months has been a talking point for Trump, who before the pandemic presided over the lowest unemployment rate in decades.

One of the key drivers of September’s payrolls figure was a 280,500 seasonally-adjusted drop in employment in state and local education, as budget cuts along with a switch to virtual education in many districts weighed on hiring. On an unadjusted basis, that figure actually rose, though by much less than typical for the start of the school year.

Federal government employment fell by 34,000 in September, reflecting a drop in temporary Census workers in the month, after hiring of such employees gave a 238,000 boost in August.

The number of Americans who were classified as long-term unemployed jumped by 781,000 last month to 2.4 million. The category, which includes those actively searching for work for 27 weeks or more, underscores the lasting economic scars many Americans will have after months of joblessness.

In another sign that economic troubles are likely to persist, the number of permanent job losers rose by 345,000 to 3.8 million, a seven-year high, while the number of Americans on temporary layoff fell by 1.5 million to 4.6 million.

The labor participation rate for so-called prime-age women, between ages 25 and 54, fell for a third straight month, by 0.7 percentage point, compared with a 0.4-point drop among men. That figure — which reflects those employed, plus the jobless who are actively looking for work, as a share of the population — signals parents are increasingly leaving their jobs due to child care obligations, with many students forced to learn virtually at home instead of in person.

Racial gaps also remained wide. Unemployment among White Americans fell to 7%, while it dropped to 12.1% for Black Americans and 10.3% for Hispanic Americans.

Private payrolls rose by 877,000, which was in line with forecasts but still marked a slowdown from the prior month. Leisure and hospitality, which has suffered some of the biggest job losses, was the largest gainer among major sectors, adding 318,000 jobs — though total payrolls remain almost 4 million below pre-pandemic levels.

Industries including oil, entertainment and financial services are all home to major companies announcing job cuts in recent days, which will take some time to show up in official data. Walt Disney Co. said Sept. 29 it’s slashing 28,000 workers in its slumping U.S. resort business, while Royal Dutch Shell Plc will cut as many as 9,000 jobs as crude’s crash forces billions of dollars in cost savings and Allstate Corp. will shed 3,800 workers. 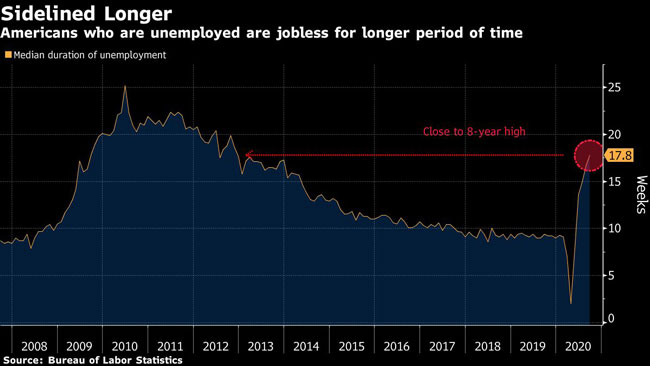 “The rate of improvement has clearly slowed, as the resurgence of the virus has constrained the pace of reopening, and the early signs for October are not encouraging,” Ian Shepherdson, chief economist at Pantheon Macroeconomics Ltd., said in a note.