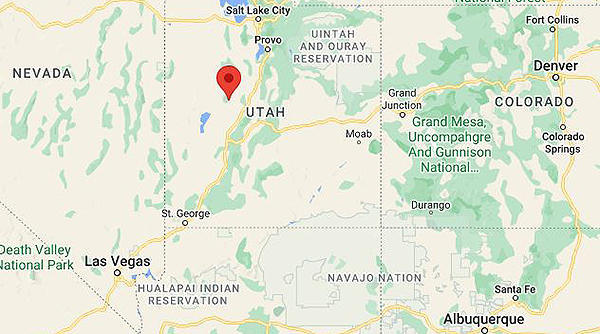 The project in Delta, Utah, is expected to be able to hold 9 million barrels of hydrogen. (Google Maps)

The U.S. is backing a project to create the world’s largest hydrogen production and storage facility in Utah in a push to bring the clean-burning fuel into the mainstream.

The Energy Department issued a conditional commitment for up to $504.4 million in debt financing for a hydrogen hub planned for Delta, Utah, that is designed to convert renewable energy into hydrogen, according to a statement April 26. Developers of the Advanced Clean Energy Storage Project, which is expected to start operating in 2025, include Mitsubishi Power Americas Inc. and Magnum Development LLC.

The commitment is the Biden administration’s latest example of “prioritizing investments in clean energy technologies that will enable deployment of more renewables, modernize our grid and, ultimately, reduce our reliance on volatile energy sources,” Jigar Shah, a solar pioneer who now heads the Energy Department’s loan programs office, said in an email statement.

The project is expected to feature 220 megawatts of electrolyzers — machines that split hydrogen from water — powered by wind and solar energy and storage caverns that initially will be able to hold 9 million barrels of hydrogen, said Michael Ducker, Mitsubishi Power’s head of hydrogen infrastructure. That will add to the global storage capacity of 11 million to 13 million barrels, he said.

The project initially will provide more than 300 gigawatt-hours of clean energy to the region each year. That means excess solar and wind power produced in spring could be stored to help meet the peak daily demand of a typical summer week, when supply tends to be constrained.

“With the unprecedented amount of renewables installed today, we are seeing the need for long-duration energy storage,” Ducker said.

Construction already is underway and Haddington Ventures LLC, sponsor of co-developer Magnum, aims to raise $650 million in equity financing for the project.