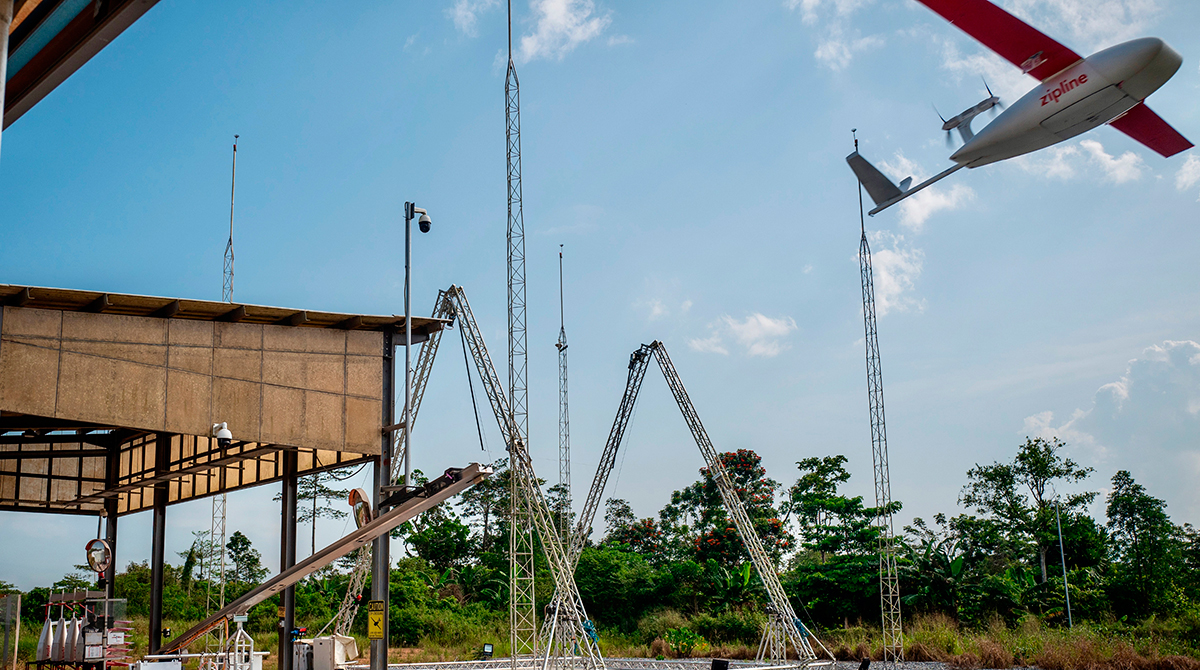 A drone flies to make a delivery at a Zipline hub in Vobsi, Ghana. (Zipline via Associated Press)

TOKYO — Zipline, an American company that specializes in using autonomously flying drones to deliver medical supplies, has taken off in Japan.

They’re flying, starting April 21, across the tiny Goto Islands, off the western coast of Kyushu, in southwestern Japan, delivering to pharmacies and hospitals.

Other parts of Japan may follow, including urban areas, although the biggest needs tend to be in isolated rural areas.

Zipline, founded six years ago, already is in service in the U.S., where it has partnered with Walmart Inc. to deliver other products at the retail chain as well as drugs. It is also delivering medical goods in Ghana and Rwanda.

Its takeoff in Japan is in partnership with Toyota Tsusho, a group company of Japan’s top automaker Toyota Motor Corp.

“You can totally transform the way that you react to pandemics, treat patients and do things like home health care delivery,” Zipline Chief Executive Keller Rinaudo told The Associated Press.

Although drones have been used in Japan for photography and aerial exhibitions, such as the Tokyo Olympics last year, they’re not in wide use, especially in urban areas because of regulations. It remains to be seen if Zipline’s health care service will help win over skeptics.

Rinaudo was optimistic the technology will be accepted in a nation known for robotics prowess, which has a large elderly population but needs better health care in isolated areas.

Medical services are the focus because “there was a real moral imperative to get that right first,” he said.

“Communities will deeply understand the value of the service. And it was also easier to get regulators comfortable with what we were doing when every flight was potentially saving a human life,” Rinaudo said.

By delivering medicine precisely, the service helps reduce stockpiles and, potentially, waste. The zero-emission quiet flights can go as far as 300 kilometers (186 miles) and are inexpensive compared to other modes of transport, according to Zipline, based in South San Francisco, Calif.

The coronavirus pandemic has made deliveries of vaccines more pressing than ever, Rinaudo said. Blood supplies, insulin and cancer treatment also have been delivered with Zipline drones.

A subsidiary called Sora-iina will carry out the operations, managing a distribution center and flight services from Fukue Port on Goto Islands. It’s the first distribution center in Asia, and 14th in the world to operate Zipline’s “autonomous instant logistics” technology. Three major Japanese distributors of pharmaceuticals have agreed to be partners.