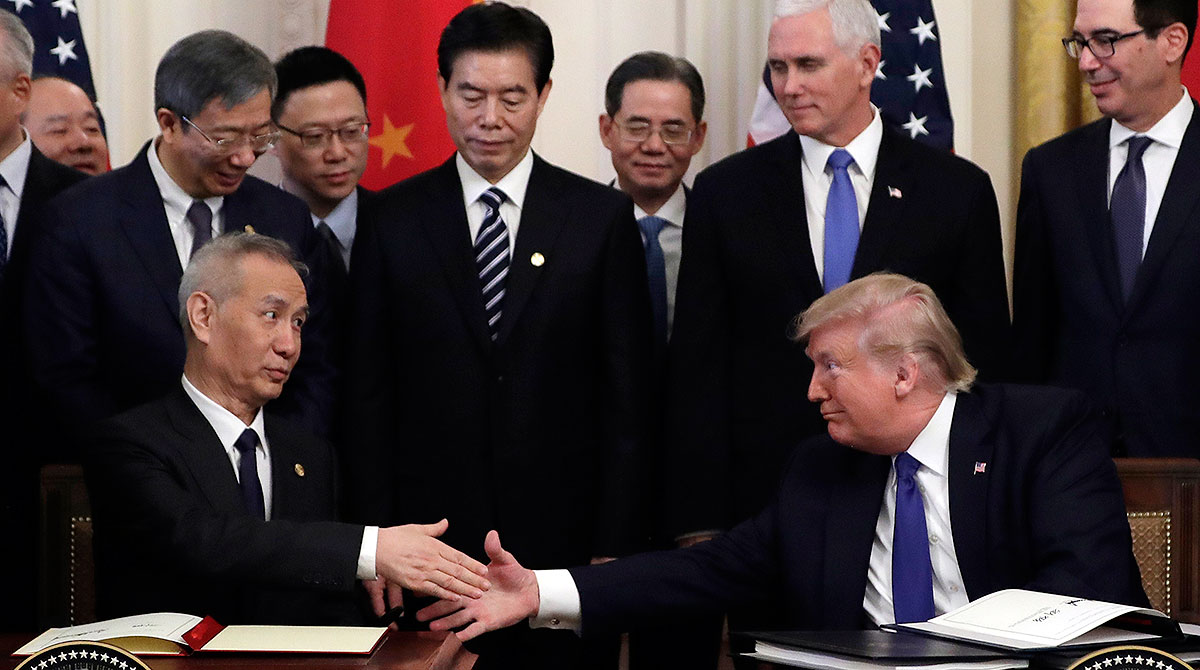 WASHINGTON — President Donald Trump signed a trade agreement Jan. 15 with China that is expected to boost exports from U.S. farmers and manufacturers and is aimed at lowering tensions in a long-running dispute between the economic powers.

Trump said during a White House ceremony that the deal is “righting the wrongs of the past.” He promoted the signing as a way of delivering economic justice for American workers and said, “We mark a sea change in international trade” with the signing.

The agreement is being described as “phase one” of a larger negotiation focusing on tensions in the U.S.-China trade relationship. Chinese leader Xi Jinping said in a letter to Trump that the first phase is “good for China, the U.S. and for the whole world.” The letter was read by Beijing’s chief negotiator, Vice Premier Liu He.

But this agreement would do little to force China to make the major economic changes such as reducing unfair subsidies for its own companies that the Trump administration sought when it started the trade war by imposing tariffs on Chinese imports in July 2018.

Trucking is trade in motion -- and the U.S. - China trade agreement signed today spells good news for the trucking industry:

The White House ceremony gave Trump a chance to cite progress on a top economic priority on the same day that the House prepared to vote to send articles of impeachment to the Senate for a trial. He told Republican lawmakers attending the ceremony that he understood if they had to leave early for votes.

“They have a hoax going on over there. Let’s take care of it,” Trump said.

“The signing of this agreement with China is good for our industry, which is significantly impacted by trade,” ATA President Chris Spear said. “It will give a boost to U.S. manufacturers and exporters of American goods and provide certainty to the supply chain — all of which will positively impact the trucking industry. It is our hope that leaders in both China and the United States will build on this promising first step and move forward to forge a broader agreement promoting fair and equitable trade between our two countries.”

The agreement is intended to ease some U.S. economic sanctions on China while Beijing would step up purchases of American farm products and other goods. Trump cited beef, pork, poultry, seafood, rice and dairy products as examples.

The deal would lower tensions in a trade dispute that has slowed global growth, hurt American manufacturers and weighed on the Chinese economy. Trump said easing trade tensions was critical.

“Keeping these two giant and powerful nations together in harmony is so important for the world,” Trump said. “The world is watching today.”

While the deal stops short of many changes the president has sought from China, it leaves in place tariffs on about $360 billion in Chinese imports, leverage the administration hopes will generate future concessions.

U.S. Trade Representative Robert Lighthizer said work on follow-up negotiations will hinge on how China fulfills the commitments it made in the initial phase.

His Chinese counterpart said “the world is now at a critical historical crossroads” facing choices of how to promote country-to-country cooperation. “Cooperation is the only right choice,’’ Liu said.

Larry Kudlow, Trump’s chief economic adviser, said the agreement vindicated the president’s strategy of using tariffs in trade negotiations, though not in every instance. “I think with China, he was exactly right,” Kudlow said. “I think the tough tariffs hurt their economy and made them much more amenable to a good deal.”

Most analysts say any meaningful resolution of the main U.S. allegation — that Beijing uses predatory tactics in its drive to supplant America’s technological supremacy — could require years of contentious talks. Skeptics say a satisfactory resolution may be next to impossible given China’s ambitions to become the global leader in such advanced technologies as driverless cars and artificial intelligence.

This first phase “hardly addresses in any substantive way the fundamental sources of trade and economic tensions between the two sides, which will continue to fester,” said Eswar Prasad, a Cornell University economist and former head of the International Monetary Fund’s China division.

The thornier issues are expected to be taken up in future rounds of negotiations. But few observers expect much progress before the U.S. presidential election in November.

“Phase 2 — I wouldn’t wait by the phone,’’ said John Veroneau, who was a U.S. trade official when George W. Bush was president and is now co-chair of the international trade practice at the law firm Covington & Burling. “That is probably a 2021 issue.’’

The U.S. has dropped plans to impose tariffs on an additional $160 billion in Chinese imports, and it cut in half, to 7.5%, existing tariffs on $110 billion of goods from China.

Derek Scissors, China specialist at the American Enterprise Institute, said the trade war has already delivered a benefit for Trump, even if it hasn’t forced Beijing to make major changes to its economic policy: Trump’s tariffs have reduced Chinese exports to the United States and narrowed America’s trade deficit with China.

The president has long lambasted the U.S. trade gap with Beijing as a sign of economic weakness, though many economists disagree. A wide trade deficit can actually reflect economic strength because it means that a nation’s consumers feel prosperous and confident enough to spend freely — on imported goods as well as on home-grown goods.

So far this year, the U.S. deficit with China in the trade of goods has declined by 16%, or $62 billion, to $321 billion compared with a year earlier. The deficit will narrow further if Beijing lives up to its pledges to buy dramatically more American imports.

Trump’s tariff increase have proved to be a headwind for China’s economy, which was already slowing, though the damage has been less than some expected. Chinese global exports eked out a 0.5% increase in 2019 despite a plunge in sales to the United States, according to Chinese customs data.