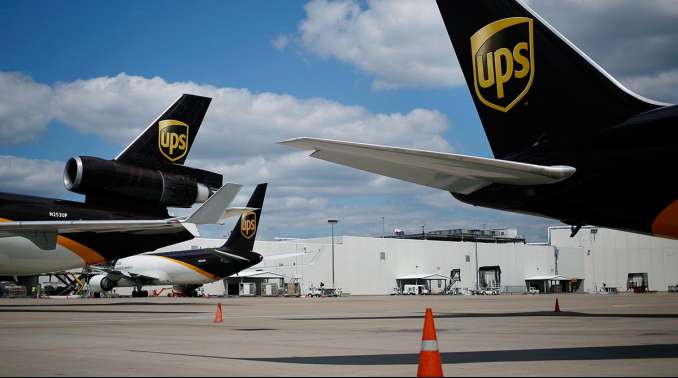 UPS Inc. already was in trouble with Wall Street over a long-term investment plan to cope with soaring e-commerce. Now the company is clashing with its pilots union because of a short-term fix for the same challenge.

Aviators are angry that the parcel-delivery giant has turned to third-party cargo airlines to help make up for a shortage of aircraft capacity.

Accusing UPS of years of poor planning and insufficient investment, the Independent Pilots Association has complained to an industry arbitrator that the courier is violating its labor contract by outsourcing flying that should be done by its own pilots.

“On a daily basis, our pilots operate a system chronically short on aircraft and strained to the breaking point,” union spokesman Brian Gaudet said.

The dispute underscores the pressure on UPS to keep pace with the rise in online shopping, which is fueling record demand for its delivery services. The Atlanta-based courier has contracted with Western Global Airlines and 21 Air to provide and fly a total of seven aircraft, the union told its 2,700 members Feb. 22 in a memo seen by Bloomberg News.

UPS acknowledged it is hiring outside contractors, declining to identify the companies. The courier said it was leasing planes to be flown by UPS crews and also having third parties fly their own planes on the company’s behalf. Western Global, based in Estero, Fla., and Greensboro, N.C.-based 21 Air didn’t reply to requests for comments.

The extra help is needed in “bridging the gap” ahead of a major fleet expansion, UPS said in a statement. The company said it was in discussions with the union about the pilots’ complaints.

“We believe it is in everyone’s best interest to resolve our issues through internal dispute-resolution procedures,” the company said.

The capacity shortage came to the fore during the 2017 holiday season, when record demand briefly overwhelmed operations. That forced the company to increase overtime as it rushed to complete shipments on time.

On Feb. 1, UPS pledged to spend an extra $7 billion through 2020 on an aggressive expansion and modernization program that includes automating warehouses and buying additional Boeing Co. 747 and 767 freighters.

The shares tumbled that day by the most in a year as investors questioned why it wasn’t raising prices more steeply to compensate for higher costs. UPS fell 12% this year through March 29, compared with the 3.8% drop for rival FedEx Corp. and a 2% decline for a Standard & Poor’s index of industrial companies.

Using third-party airlines for longer than 45 days in a year violates UPS’ labor contract with its pilots, the union said in its memo. It has asked an arbitrator to determine if the company owes its pilots money damages, among other actions. UPS hasn’t said how long it will continue using the subcontractors.

Rules laying out who can fly for an airline and when are common throughout pilot contracts in so-called scope clauses, said Dan Akins of aviation consultant Flightpath Economics. Pilots fight to defend their work.

“I would say scope is section one of every contract, because that’s protected work,” Akins said.