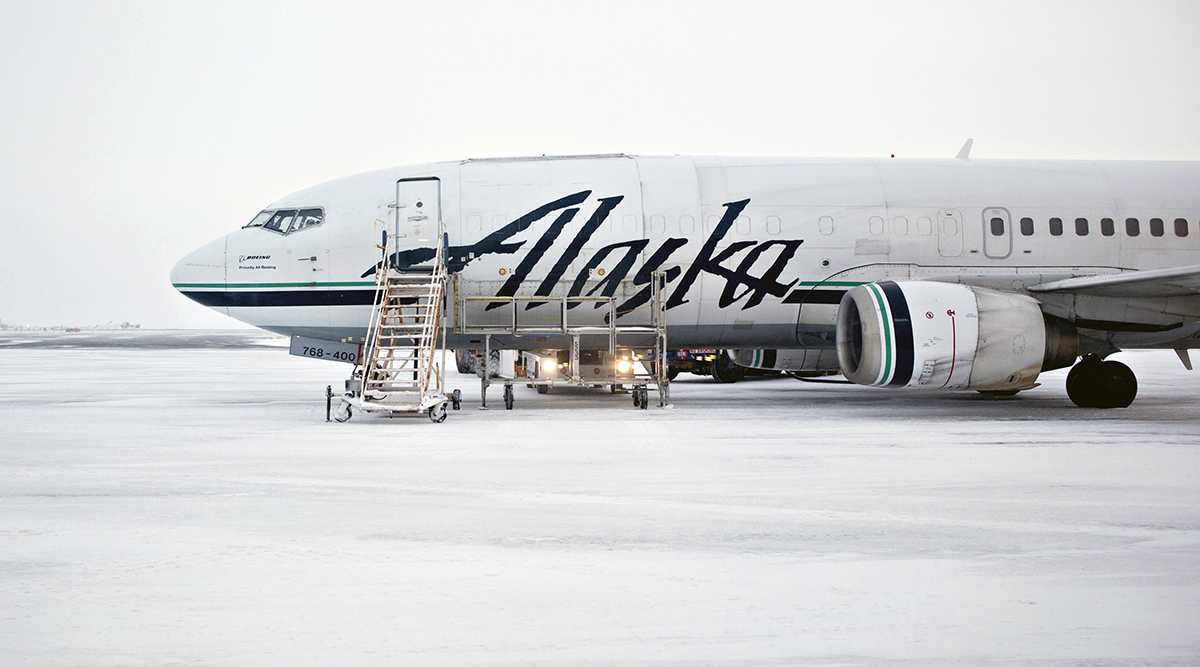 UPS International President Jim Barber told an Anchorage, Alaska, group the right timing for his first trip to Alaska had come for a number of reasons, including the hub’s expanding importance in connecting to China and Asian-Pacific communities.

Barber, the head of the UPS International, spoke Dec. 8 before the Alaska World Affairs Council at the 49th State Brewing Co.

Barber has been president of UPS since 2013, previously serving as president of UPS Europe. In that role, he helped oversee the second wave of international expansion for UPS that began in the mid-1990s.

Barber spoke of UPS’ continued commitment to use Anchorage as a critical “node” in its global logistics operation.

In Alaska, UPS employs 1,200 drivers. It lands 110 flights each week. And it pays between $10 million and $15 million per year in landing fees to Ted Stevens International Airport in Anchorage.

“On this first trip to Alaska, I came for a couple of reasons,” Barber said. “It was time to get up here and continue to support it in different ways… here there is a great connecting point to the Asian Pacific and China.”

Barber cited the statistic that 1 in 10 Anchorage jobs is tied to the airport. It is the fifth-largest airport in the world in terms of cargo throughput. In terms of logistics, Alaska is already a global player, he said. But Alaska could ship more goods to the Far East, given huge demand.

“Alaska is a unique node for us as we shift to the concept of China and e-commerce,” he said.

China, with its 1.4 billion people and its model of consumerism “is one that is most interesting to me,” Barber said. “It’s an economy whose middle class of 335 million people is bigger than the U.S. population and it is growing and it is continuing to grow. It wants what we have.”

He predicts their demand for Western products and services will ultimately swell the economy and change the world in the next 20 to 30 years.

Another factor is that of the world’s 50 wealthiest per capita cities, nine are in China.

Barber’s Alaska visit, therefore, “focused in the past couple of days on how we at UPS need to support that growth model. Our airplanes that go full come back 20% to 25% full of similar product. The more we can do to change that, it will continue to help us invest in Anchorage and Alaska.”

He encouraged Alaskan entrepreneurs to keep their products in mind for this huge Chinese market.

While acknowledging it is indisputable that the U.S. lost jobs to overseas manufacturing, he doesn’t want to see the U.S. nix the North American Free Trade Agreement, or NAFTA, in a “backwards move.”

“Our job is to refresh it. When we talk about NAFTA it does need to be refreshed, particularly with Mexico,” he said. “But we must do it respectfully.”

In fact, after reduced corporate taxes, Barber said his second big Christmas wish is for an easing in world trade relations.

In May 2018, Barber said UPS plans to launch a product in the China market, but he declined to say more.

UPS made news earlier this year when it provided a grant of $800,000 plus logistical support through the UPS Foundation in a partnership to get vaccines to poor countries, Barber noted. With the robotics company, Zipline International Inc., UPS undertook drone flights in Rwanda starting in August. The drones delivered blood and vaccines to half the transfusion centers in the country, saving lives.

UPS will look at using drone technology in the future, but for now, the “culture of UPS” is about the human relationships grounded to communities, he said.

The system relies on online map data, customized by UPS, to calculate miles and travel time to plan the most cost-effective routes.

For every mile reduced, costs are also reduced. ORION has helped save UPS $50 million, which also is a reduction in the company’s carbon emissions.

A good retail season bodes well for UPS this year. But keeping up with the seasonal spike of 750 million packages to deliver “takes every breath we have to keep up,” Barber said. He would like to find new ways to streamline so that the high e-commerce demand for package delivery can be done “in a way that makes everyone happier.”

UPS has adapted and moved forward, and pulled back when necessary, he said. They hire about 100,000 new employees in the fleet each season.

Robots may seem the wave of the future, but Barber said that concept keeps him awake at night because of what UPS will lose in its community connections and jobs.

Barber mentioned a friend in the wholesale grocery business. He built his own robots to move groceries through a 500,000-square foot warehouse in New York.

“There used to be 600 people moving groceries through the building. He can run that building with four people and robots do the rest,” Barber said. “In a logistics industry, robotics hasn’t yet come.”

UPS is able to win the hearts and minds of communities by being on the ground in 220 countries, he said. The 110 flights through Anchorage a week is part of the global network, but to “become part of the fabric of a community happens by having feet on the ground,” he added.

UPS is bringing on 14 new Boeing 747-8 cargo freighters, and many will flow through Alaska in the coming year. During a question and answer exchange, Barber was asked about establishing an Anchorage distribution arm of UPS.

He didn’t rule it out.